During the modernization, the specialists of Smart Maritime Group extend each vessel by means of an insert by 12 meters and give it two hold. 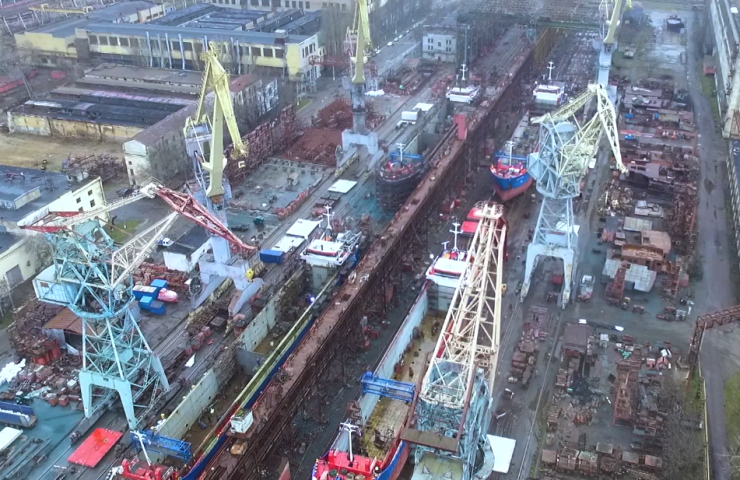 Specialists of the Kherson shipyard Smart Maritime Group (SMG, Kherson) successfully continue the project to modernize a series of dry cargo vessels owned by EemsWerken B.V. (Netherlands). Today, 4 vessels of the Dutch company are on the stocks of the enterprise at once - EEMS Spirit and EEMS Stream joined the dry cargo ships EEMS Servant and EEMS Solar that entered the shipyard in January in March.

The modernization works for EEMS Servant and EEMS Solar are currently in their final stages. On Monday 22 March, EEMS Solar was moved to a dock for launching, followed by EEMS Servant. After completing the outfitting and testing, the vessels will be handed over to the customer.

Meanwhile, at the EEMS Spirit bonfire, the body has already been cut and the bottom section has been installed. Work has also begun on EEMS Stream.

Let us remind you that in the course of modernization, each vessel is lengthened by an insert by 12 meters and becomes two hold. At the same time, the total volume of the holds increases by more than 700 cubic meters. The shipyard specialists also paint ballast tanks, outer skin and cargo holds, lay new piping systems and install new hatch covers. In addition, a self-dumping boat is installed in the stern of the vessel. About 190 tons of high quality metal is used to improve each vessel.

As a result of modernization, the maximum vessel deadweight is increased by 20%.

As reported, at the end of 2020, SMG signed a contract for the modernization of 6 vessels of the Dutch company EemsWerken B.V. The contract is planned to be fully implemented in July of this year. Its cost was about 100 million hryvnia.

Bonfires built in 2010 are intended for coastal transportation of general cargo. The vessels were built according to the standard design: maximum length - 87.27 m, width - 11.42 m, deadweight - 2620 tons.

Smart Maritime Group is the largest shipbuilding company in Ukraine, uniting the shipbuilding assets of the industrial and investment group Smart Holding: Nikolaev and Kherson shipyards. The production facilities of SMG allow us to build medium-tonnage full-set vessels and carry out complex ship repair works. The shipyards are ordered by companies from the Netherlands, Norway, Great Britain and other countries of the world.

In 2020, the company modernized and repaired 55 vessels and built 2 hulls for a chemical tanker.

The beneficiary of Smart-Holding is Vadim Novinsky, who recently entered the list of Ukrainian billionaires due to rising steel prices and, as a result, an increase in the capitalization assessment of the Dutch mining and metallurgical holding Metinvest BV in which Novinsky has a 25% share.

Финансовая аналитика, прогнозы цен на сталь, железную руду, уголь и другие сырьевые товары. More news and analytics on Metallurgprom telegram channel - subscribe to get up-to-date market information and price forecasts faster than others.
Сomments
Add a comment
Сomments (0)
On this topic
Smart Maritime Group launched 4 tanker for the Dutch VEKA Group
At the Kherson shipyard, the dry cargo ship was lengthened by 25 meters, increasing the volume of
Kherson shipyard has completed the contract for the modernization of series 6 of the Dutch fires
At the Kherson shipyard will build one more tanker
Ukrainian SMG will lengthen 6 Dutch ships by 12 meters
Smart Maritime Group, has launched the third tanker for Dutch VEKA Shipbuilding
Recommended:
Metinvest enterprises in Ukraine resumed work after massive shelling of infrastructure
The pipe metallurgical plant in Nikopol continued to work after a short stop
The United States imposed a ban on the import and sale of equipment from Huawei, ZTE and a number of other Chinese companies
News Analytics
Analysts predict 5% annual growth in the iron casting market through 203006-12-2022, 12:44
Oman to build a new steel plant worth $3 billion in 3 years06-12-2022, 12:14
Tesla's Shanghai gigafactory set a new record for electric vehicle shipments in05-12-2022, 15:24
Sanjeev Gupta may lose control of his steel plants in Belgium05-12-2022, 13:55
Steel demand and weather in Australia will affect coking coal prices05-12-2022, 13:16
Analysts predict 5% annual growth in the iron casting market through 203006-12-2022, 12:44
Commodity prices will fall, metals quotes will rise slightly - Focus Economics28-11-2022, 13:28
Platinum market to face shortage next year - WPIC22-11-2022, 18:25
Global steel demand falls and will fall by 2.3% in 2022: WorldSteel19-10-2022, 23:12
Iron ore prices fall to 11-month low15-10-2022, 10:36
Sign in with: