11-12 in Zaporozhye in the hub "Platforms for Joint Action" an off-site module of the educational project Stem is Fem on the topic "Metallurgy" was held. The purpose of this program is to motivate girls to choose a STEM profession for themselves, that is, related to science, technology, engineering or mathematics. 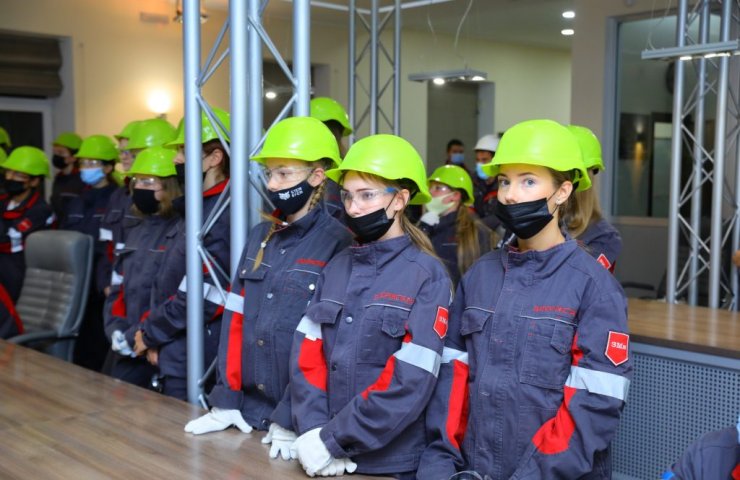 Successful industry specialists and representatives of Metinvest Polytechnic became the speakers of the module. One of the speakers was Natalya Mikhaiskaya, Financial Director of Zaporizhstal PJSC.

- "Zaporizhstal" is not only production, it is a large territory of opportunities for young people. The plant has a lot of programs for young people, which cover both students getting a profession and young workers who have just got a job. One of the interesting programs that I really like is about mentoring. That is, when a young employee comes to the plant, he is assigned a mentor who accompanies him for about a year or two, depending on the chosen profession. This is very convenient, because in a large enterprise an inexperienced person has someone on whom he can rely, - said Natalya Mikhaiskaya.

All these statements that women have no place in technical professions are just stereotypes. There are already women in the world who head metallurgical companies. Recently in Romania, a woman became the CEO of a metallurgical enterprise. Yes, while this is not accepted, there are still many stereotypes, but you are modern, you know a lot, you read, communicate with different people, you should not pay attention to this, - Yulia Dankova addressed the participants.

Here they saw the main control room of the plant, learned about all stages of steel production, saw with their own eyes how a steel coil is rolled in the hot-rolled shop and looked at the environmentally friendly acid-pickling line NTA-4. The schoolgirls distinguished themselves by their curiosity and were not afraid to ask questions. The plant's specialists had to explain a lot of production issues: from the need to use refractories in the blast furnace to the recycling cycle of using water at NTA-4.

- I am delighted with this large-scale project. On the excursion, I did not expect what I saw - I learned about the various methods of metal smelting. I used to think that metallurgical production is not so large-scale and looks different. This is all new for me, - Taisia ​​Sladkaya from the Kiev region shared her impressions. - I was very impressed by the control room, which looked mega-innovative, I did not expect that the plant, which is quite respectable in age, has such new subdivisions and workshops. Metallurgy, as it turned out, is a very interesting area. I came to this module precisely to learn something new, and this is a great opportunity, for which I thank Metinvest. Now I am thinking where I will go to study, looking at new areas for myself, perhaps, I will go to metallurgy.

The module was held in partnership with Metinvest Company and OO Zaporozhye. Platform for Joint Action ”. This is a continuation of the partnership for the sake of fighting stereotypes. In June, the Science Is It exhibition opened at the Platform for Joint Action Hub. Five modern Ukrainian illustrators painted portraits of 12 famous Ukrainian scientists, after which girls from all over Ukraine took part in an essay competition about women scientists.

Recommended:
An investment project worth $ 50 million is completed at the Ingulets mining and processing plant
Investment demand for electricity projects in Ukraine is $ 25 billion - Ministry of Energy
The exchange price of gas in Europe has exceeded a record $ 800 per thousand cubic meters
On this topic
Metinvest Polytechnica will cooperate with the manufacturer of mine rescue equipment DEZEGA
Construction of the Metinvest Polytechnic University Complex begins in Mariupol
The first non-state mining and metallurgical university was created in Ukraine
Metinvest will create new jobs for youth
400 students and students of specialized educational institutions will undergo practical training
Zaporizhstal paid $400 young professionals who worked at the plant for more than a year
Partner news
Сomments
Add a comment
Сomments (0)
News Analytics
Low-cost carrier Ryanair plans aggressive expansion in Ukraine16-09-2021, 21:34
Deutsche Bahn decided not to aggravate the situation with trade unions and will16-09-2021, 15:20
China to continue selling off its reserves to ease supply deficit16-09-2021, 15:44
Ten out of fifteen steel-making electric furnaces in Ukraine are idle -16-09-2021, 12:46
Australia will build its own nuclear submarines16-09-2021, 10:15
Moody's changes its outlook for the mining and metals industry from "positive"14-09-2021, 18:39
European steel prices decline from summer highs and remain stable high04-09-2021, 10:38
Rise in European steel prices to dizzying levels finally fizzled out - Bloomberg27-08-2021, 13:18
Gold continues to be the most efficient portfolio asset - WGC26-08-2021, 12:38
Falling iron ore prices caught Wall Street by surprise - WSJ23-08-2021, 13:57
Sign in with: