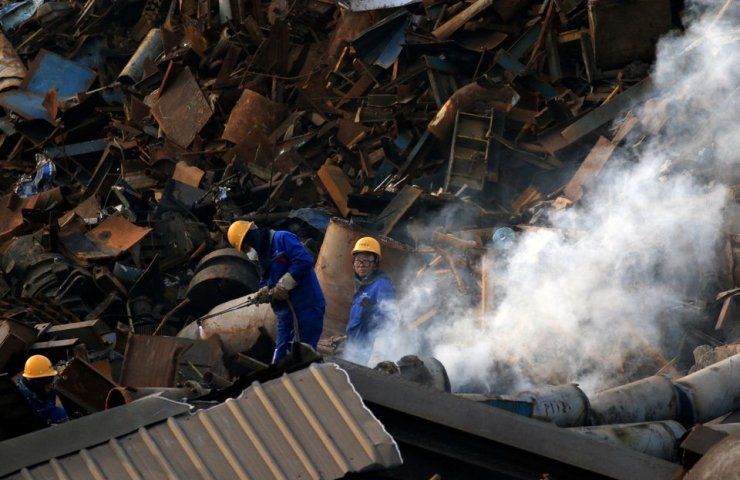 Scrap prices for ferrous metals may receive growing support from rising demand in China after setting government targets for decarbonisation, reducing emissions and limiting growth in steel production. Scrap use will increase as supplies of coking coal, coke and energy remain limited, S&P Global Platts said in a policy brief.

S&P Global Platts estimates that imported scrap prices in China remain high at $ 598 per tonne CFR as of October 1, higher than the September average of $ 576.19 per tonne CFR.

After last month's decline in scrap prices in Europe and price stabilization in Turkey, scrap metal to be exported to China may receive higher prices. This could maintain its position in the scrap markets compared to the price of the reference ore with 62% iron, which has fallen in price by another 25% compared to September compared to August.

China imports iron ore with an iron content of 62%. Iron ore prices with an iron grade of 62% remain relatively close to recent lows after having more than halved since July, while import prices for coking coal in China hit new records last month.

According to Platts calculations using data from the World Steel Association, in the first eight months of 2021, China's demand for scrap and metals for steel production, in addition to iron production, could increase by about 26.5% compared to the same period in 2020.

Using higher grades of recycled steel scrap in large quantities when mills are trying to add scrap and HBI to the blast furnace can help steelmakers reduce CO2 emissions and save valuable fuel and energy.

China plans to cut steel production below 2020 levels this year, the first annual cut since 2016. China's liquid steel production is likely to fall further in September and remain low in October, while steelmakers face wider production restrictions from early September due to energy controls.

Recall that Ukraine is preparing for parliamentary consideration the bill providing for a temporary complete ban on the export of scrap metal from the country, which will increase the shortage of this raw material in the regional and world market as a whole.

Финансовая аналитика, прогнозы цен на сталь, железную руду, уголь и другие сырьевые товары. More news and analytics on Metallurgprom telegram channel - subscribe to get up-to-date market information and price forecasts faster than others.
Сomments
Add a comment
Сomments (0)
On this topic
European Union scrap collectors worried about possible export restrictions
Coking coal entered the list of strategic raw materials at the global level
The Ukrainian government is preparing to ban the export of scrap metal - a bill has been prepared
Ukrzaliznytsia held 11 auctions for the sale of scrap metal worth half a billion hryvnia
On the regional markets of metallurgical products, prices are balancing in a narrow corridor
Spikes in prices for scrap on the world market is a temporary phenomenon - expert opinion
Recommended:
Ukraine reduced the export of semi-finished products from carbon steel by 70.3%
EU new car market continues to recover in double digits
Volvo starts deliveries of electric trucks made of fossil-free steel
News Analytics
Analysts predict 5% annual growth in the iron casting market through 203006-12-2022, 12:44
Oman to build a new steel plant worth $3 billion in 3 years06-12-2022, 12:14
Tesla's Shanghai gigafactory set a new record for electric vehicle shipments in05-12-2022, 15:24
Sanjeev Gupta may lose control of his steel plants in Belgium05-12-2022, 13:55
Steel demand and weather in Australia will affect coking coal prices05-12-2022, 13:16
Analysts predict 5% annual growth in the iron casting market through 203006-12-2022, 12:44
Commodity prices will fall, metals quotes will rise slightly - Focus Economics28-11-2022, 13:28
Platinum market to face shortage next year - WPIC22-11-2022, 18:25
Global steel demand falls and will fall by 2.3% in 2022: WorldSteel19-10-2022, 23:12
Iron ore prices fall to 11-month low15-10-2022, 10:36
Sign in with: