In the mechanical assembly shop of NKMZ, representatives of the ports of Ukraine saw how the bridge ore grab loader is being assembled for the Azovstal metallurgical plant, the largest previously produced by Novokramatorsk workers. 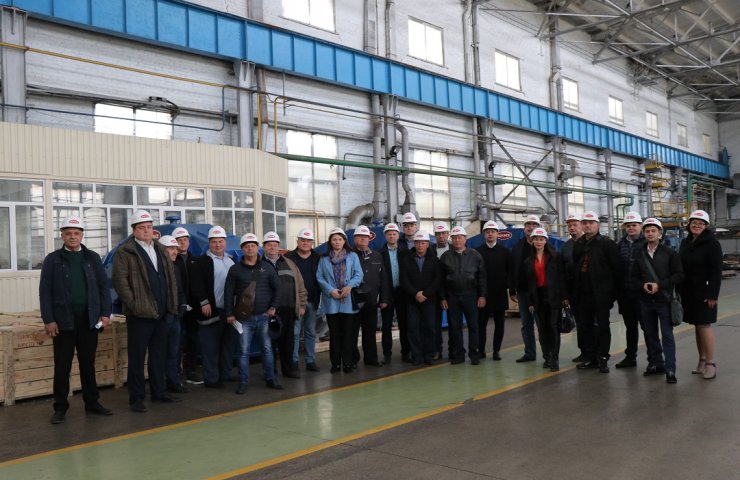 On October 7, on the basis of the Novokramatorsk Machine-Building Plant, a meeting of the Committee on Mechanization, Technology and Informatics (KMTI) of the Ukrainian Ports Association "Ukrport" port service functions.

NKMZ was selected for the meeting, as it is a leading machine-building enterprise in Ukraine, including a manufacturer of modern portal cranes, which are successfully operated in Ukrainian ports.

The guests went on an excursion to the workshops of the plant, where they got acquainted with modern technologies and equipment. In mechanical assembly shop No. 8, they watched the assembly of a bridge ore grab loader for the Azovstal metallurgical plant, the largest previously produced by Novokramatorsk workers.

Igor Protynyak, General Director of NKMZ JSC, addressed the meeting participants with a welcoming speech. In particular, he emphasized that NKMZ is focused on meeting the needs of each specific client. The enterprise produces not only serial, but also unique machines for the personal tasks of the customer, and has sufficient engineering and technical potential to create a fully functional machine from the first project.

The products manufactured by NKMZ for port workers were presented in their reports by the specialists of the department of the chief designer of mining and forging equipment. The chief engineer of the project Gennady Vovnenko focused on the design features and layout of the cranes, the lead designer Oleg Gramatny - equipment for bulk materials warehouses.

Chairman of the KMTI, Vice-Rector for Scientific Work of the Odessa National Maritime University Aleksey Nemchuk, noticed that every time you get to NKMZ, you are amazed at the changes taking place here. “I was delighted when I first visited here in 2012,” he said. - After today's excursion, it only intensified. We saw that the management of NKMZ manages to keep the plant at the proper level: production is working, orders are being fulfilled. I have deep respect for the Novokramatorsk and I am proud that there is such an enterprise in Ukraine. I hope to see new achievements of NKMZ in the future. ”