Installation of a spreader made by Ukrainian NKMZ continues in Uzbekistan

Uzbek miners did not hesitate to give preference to NKMZ spreaders and simultaneously ordered two such machines. 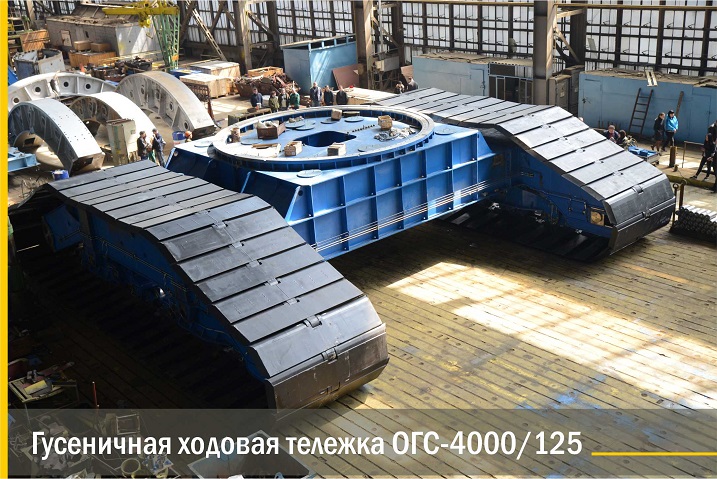 The installation of the first of two new modern dumpers OGS-4000/125, designed and manufactured by Novokramatorsk Machine-Building Plant (NKMZ) for the Navoi Mining and Metallurgical Plant (NMMC) (Republic of Uzbekistan), continues in the Muruntau quarry.

Under the leadership of the chief engineers of NKMZ, the main large-sized units of this machine were mounted - a tracked undercarriage and a reloading carriage. All the rest will be built on these basic nodes. The Novokramatorsk spreader has an original design and corresponds to modern world analogues.

Uzbek miners did not hesitate to give preference to NKMZ spreaders and simultaneously ordered two such machines. They completely trust the Novokramatorsk brand, because the steeply inclined conveyor, which has been in operation in the Muruntau quarry since 2011, for the first time at NKMZ, has earned their best reviews. The plant also has other Novokramatorsk mining equipment, which they are completely satisfied with.

Spreader is a mining vehicle designed for laying rocks in dumps. Traditionally, it is used in open pit mines in complexes operating on a cyclical-flow technology, and is its final link after crushing and transfer points and belt conveyors. The topic of spreaders at NKMZ was especially popular in the 60-70s of the last century. But the machines designed and manufactured at that time were on walking and rail-walking tracks. The new spreader OGS-4000/125 is tracked. This provides the Novokramatorsky machine with great mobility and wide technological capabilities when laying dump rocks. As a part of each of the two complexes of cyclic-flow technology, in which these spreaders are installed, two crushing and reloading devices will operate as well. One unit includes a new gear-type auger crusher. All of them were also manufactured at NKMZ and shipped to the customer in 2020.