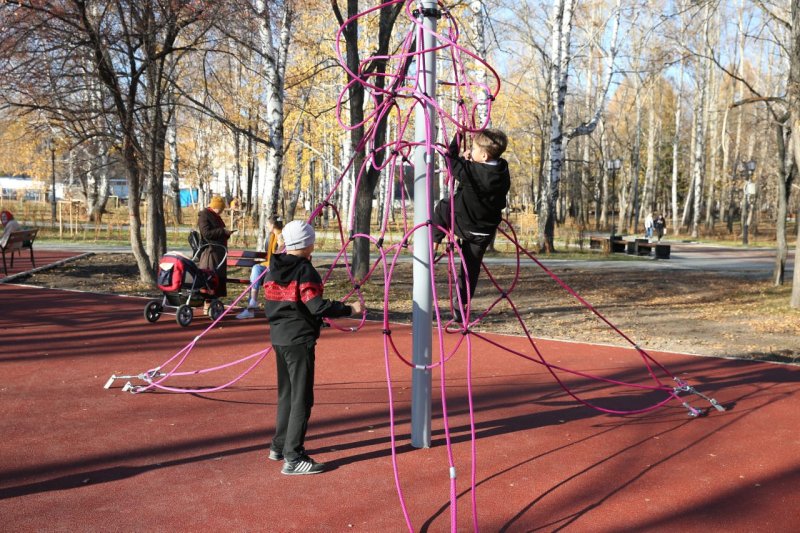 Today, a playground was solemnly opened in the Victory Park of the city district of Revda. The cost of the project is 3.7 million rubles, 2 of which were allocated by PJSC Sredneuralsky Copper Smelting Plant (an enterprise of the metallurgical complex of UMMC). The rest of the funds - NLMK-Ural JSC and the city budget.

On 490 square meters there is a non-traumatic rubber coating, several types of swings, play, sports and ropeway towns. In total - 16 objects. During the preparatory work, the contractor dismantled the old structures, laid out the pedestrian paths with tiles. Young seedlings and shrubs were planted in the place of emergency trees. They also did not forget about the parents: benches were installed for them to rest. At night, the territory is illuminated by modern park lamps.

- Cooperation between the authorities and business brings such results in the form of a beautiful, safe and high-quality playground, - said Bagir Abdulazizov, director of PJSC SUMZ. - I would like our city to be brighter, more beautiful, so that the kids feel good here.

Director of PJSC SUMZ Bagir Abdulazizov, head of the city district Revda Irina Teisheva, general director of NLMK-Ural Sergey Shalyaev and chairman of the district Duma Andrey Mokretsov cut the red ribbon symbolizing the opening of the site. However, long before the solemn part it was already chosen by small residents of Revda.

- Our residents asked for a site in the park. It has always been here, but it consisted of one carousel and one slide. They were old and unsafe. The new equipment is certified and meets all safety requirements, - said the head of the city Irina Teisheva. - But the site would not have appeared without the help of patrons: our city-forming enterprises. Thank them very much!

Public Joint Stock Company Sredneuralsky Copper Smelter is one of the largest chemical and metallurgical complexes in the Middle Urals. SUMZ was put into operation on June 25, 1940.