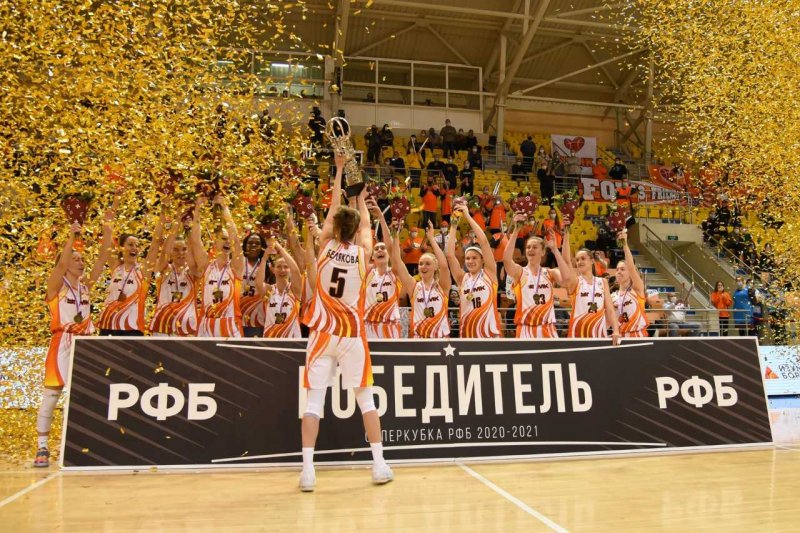 The basketball club UMMC, the reigning champion of Russia, has confirmed its status as the strongest team in the country, confidently beating the Orenburg "Nadezhda" Orenburg Cup in the RBF Super Cup match at the main arena of the Sports Palace.

The meeting between the champion of Russia and the winner of the Russian Cup turned out to be a fighting one. The starting ten-minute segment was held in a bitter struggle. Only in the second quarter Miguel Mendes' charges added as usual, demonstrating their trademark team play. The guests tried their best to stop the onslaught of the "foxes", but could not straighten their defense and attack. Closer to the long break, UMMC managed to break away from the rival by an impressive 25 points.

“Nadezhda” made every effort to return to the game. In the course of the third quarter, Maros Kovacic's charges were able to win back seven points of the difference - 68:52, but they did not succeed in completely taking control of the game. In the final segment UMMC rushed forward again, and at the end of the match the players of the youth team of our team got their minutes on the floor. UMMC fell just a little short of the hundred 93:68, having won the first ever match of the RBF Super Cup and taking the first trophy of the 2020/2021 season.

The most productive player of the meeting was UMMC forward Emma Meesseman, on her account - 27 points and 7 rebounds. Forward Viktoria Medvedeva scored 15 points.

- We are pleased with today's victory. This victory brought us a new title, and we love titles very much. The game itself was played in jumps. There were good moments and some crazy ones. In the third quarter, we had stupid losses and a failure in defense. Our main conclusion after this game is one - to try to play more stably and qualitatively. UMMC will play its next match on February 28 within the Russian Premier League against Sparta & K near Moscow. The match will take place at the main arena of DIVS, beginning at 17:00.

On this topic
Legendary Magnitogorsk ice hockey club Metallurg celebrates its 65th anniversary
In Verkhnyaya Pyshma, the Tanker's Day was held under the roar of engines of armored vehicles and
UMMC is a four-time winner of the European Super Cup
Olympic champion Angelica Timanina presented awards to young synchronized swimmers in Verkhnyaya
BC UMMC - thirteen times champion of Russia
Basketball club UMMC became a five-time Euroleague champion
Добавить комментарий
Комментарии (0)
News Analytics
Iran is satisfied with the reaction of the world community to 60% enrichment of18-04-2021, 13:24
Gas prices in Ukraine have reached a record value over the past two years -16-04-2021, 17:24
Ukrmetallurgprom asks the Antimonopoly Committee to allow Metinvest to bid for16-04-2021, 17:23
A fatal accident occurred on the territory of the Dnieper Metallurgical Plant16-04-2021, 13:01
Cars built for Euro 2012 will be repaired at the Kryukov Carriage Works16-04-2021, 12:46
World Steel Association predicts a good year for metallurgists15-04-2021, 18:19
World Steel Association defines green steel and its variations12-04-2021, 13:14
China unlikely to cut steel capacity in 2021 due to high steel prices07-04-2021, 12:11
Scrap metal market at the beginning of April02-04-2021, 11:10
Rising Chinese Prices Fueled Rising Global Steel Prices - MEPS25-03-2021, 18:54
Sign in with: