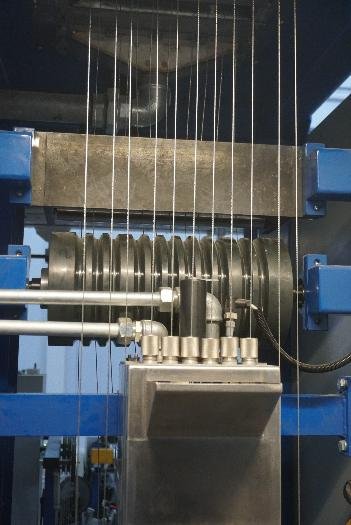 Kolchuginsky Elektrokabel (part of the Cable Alliance Holding, which unites the cable assets of UMMC) invested about 90 million rubles in the development of the production of cables for rolling stock and aircraft construction. p>

The purchase of four lacquers allowed expanding the range of cable and wire products (PPC). The new equipment is designed to apply varnish on the textile braids of cables and wires.

“During operation, even when laid fixed, cable and wire structures come into contact with the material of the aircraft or locomotive body, therefore, damage is possible due to abrasion of the outer cover. Applying a varnish layer to the braid minimizes this risk, "said Anatoly Barinov, chief technologist of EKZ JSC.

The productivity of the new equipment is 1.7 times higher than that of its predecessor, due to the additional function of convection of the air flow inside lacquer ovens. This reduces the time and improves the drying quality of the varnish coating, which determines the strength of the textile braid and the service life of the gearbox. For rolling stock products, it is at least 30 years, for onboard wires - at least 15 years.

The need to expand production capacity has arisen due to the increased demand for structures for rolling stock, as well as due to the development of a new position in the nomenclature of the plant - wires for aircraft construction.

Elektrokabel is one of the few Russian plants that has a resource base for the production of almost all groups of gearboxes. The enterprise has historically developed as a universal one, which is why we manage to maintain a leading position even in the most difficult times for the economy. In a highly competitive environment, it is important not only to keep track of the latest trends in the gearbox market, but to anticipate the most promising niches by offering improved designs ”, - stressed the director of EKZ JSC Evgeny Sukhodoev.

On this topic
EKZ will increase control over the quality of insulation of control and communication cables
Kolchuginsky "Elektrokabel" modernized equipment for the production of cables for ships and rolling
"Sibkabel" modernized the processing of organic silicon materials
The improved line will provide cables IND. double protection
The TMK Board of Directors recommends accepting the voluntary offer of the TMK subsidiary in
The equipment of factory "Electrocable" has replenished with six braiding machines
Добавить комментарий
Комментарии (0)
News Analytics
Ukraine and the United States are deepening cooperation in the trade and20-04-2021, 20:46
Nikopol pipe plant "Centravis" is approved as a supplier of the Chinese20-04-2021, 20:10
The capacity of the domestic steel market in Ukraine in January-March decreased19-04-2021, 10:33
In Russia, there is an exuberant demand for agricultural machinery19-04-2021, 10:24
Iran is satisfied with the reaction of the world community to 60% enrichment of18-04-2021, 13:24
World Steel Association predicts a good year for metallurgists15-04-2021, 18:19
World Steel Association defines green steel and its variations12-04-2021, 13:14
China unlikely to cut steel capacity in 2021 due to high steel prices07-04-2021, 12:11
Scrap metal market at the beginning of April02-04-2021, 11:10
Rising Chinese Prices Fueled Rising Global Steel Prices - MEPS25-03-2021, 18:54
Sign in with: