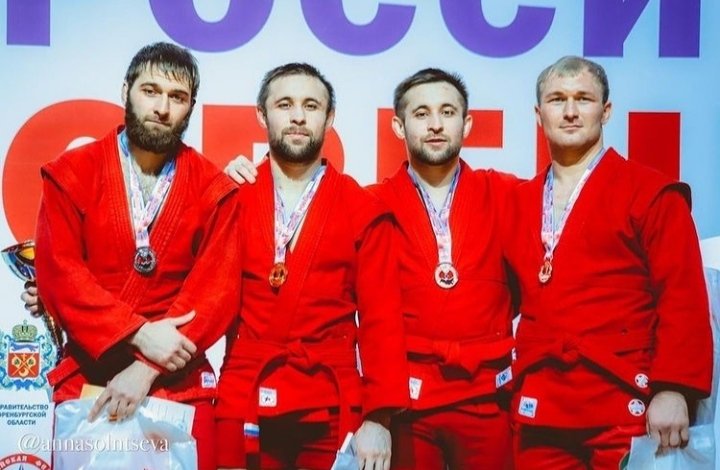 A total of nine awards of various denominations were won by the athletes of the UMMC CS (Verkhnyaya Pyshma) at the Russian Sambo Championship, the country's main national tournament, held in Orenburg. They have won one gold, three silver and five bronze medals.

The maximum result was achieved by Uali Kurzhev (up to 79 kg), who in a brilliant style won his next title of champion of Russia. He confidently moved along the tournament grid, and the final turned out to be especially striking, where Kurzhev actually defeated Askerbiy Gerbekov from Karachay-Cherkessia with only trips and sweeps ahead of schedule. By all accounts, this fight can be safely studied as a video tutorial, how clear and refined were the movements and techniques of the champion. At the same time, few people guessed that Kurzhev entered the decisive meeting with a broken rib.

This weight category turned out to be the most productive for the Upper Pyshminers. Bronze medals were awarded to Uali's twin brother Ali Kurzhev and Denis Sukhanov.

The fifth (!) in a row "silver" of the Russian championship is in the asset of Vladimir Gladkikh (up to 58 kg). And all these five times, Muscovite Sayan Hertek was his rival in the final. In their traditionally stubborn and tense duel, Vladimir lost with a minimum score of 0-1.

A silver medal went to the only representative of the beautiful half of humanity in our team - Anna Balashova (up to 80 kg). Anna started in such a way that at the preliminary stage it seemed as if she did not notice her rivals, so obvious was the superiority of the titled athlete. However, in the final, Balashova had a very hard time - there she ran into the resistance of a very skilled Zhanara Kusanova, besides the mistress of the carpet. The fight turned out to be absolutely equal, with mutual chances of winning, but in the end, Kusanova celebrated it with a minimal advantage of one point.

For the first time at the national championships, Ivan Panyukhin, winner of silver in the category up to 53 kg ... Debutant Danir Shamsutdinov won a bronze medal in this weight category. It is curious that two weeks ago Danir also received a "bronze", only at the youth championship of the country.

Note that the Russian championship of this year was for the first time held according to the new international FIAS sambo rules and in new weight categories. Its winners will have to go to the World Championships in November in Moscow, and the finalists to the European Championships in May in Limassol (Cyprus).

On this topic
Another SAMBO Hall opened in Verkhnyaya Pyshma
Vladimir Gladkikh from UMMC Sambo Club - World Champion
A new sambo section has opened at school No. 17 of Sukhoi Log
TMK Held II WorldSkills Corporate Championship - Games of the Masters
The UMMC Sambo Club was granted the right to host the European Sambo Championship 2020
European SAMBO Championships 2020 will be held in Yekaterinburg
Добавить комментарий
Комментарии (0)
News Analytics
The capacity of the domestic steel market in Ukraine in January-March decreased19-04-2021, 10:33
In Russia, there is an exuberant demand for agricultural machinery19-04-2021, 10:24
Iran is satisfied with the reaction of the world community to 60% enrichment of18-04-2021, 13:24
Gas prices in Ukraine have reached a record value over the past two years -16-04-2021, 17:24
Ukrmetallurgprom asks the Antimonopoly Committee to allow Metinvest to bid for16-04-2021, 17:23
World Steel Association predicts a good year for metallurgists15-04-2021, 18:19
World Steel Association defines green steel and its variations12-04-2021, 13:14
China unlikely to cut steel capacity in 2021 due to high steel prices07-04-2021, 12:11
Scrap metal market at the beginning of April02-04-2021, 11:10
Rising Chinese Prices Fueled Rising Global Steel Prices - MEPS25-03-2021, 18:54
Sign in with: