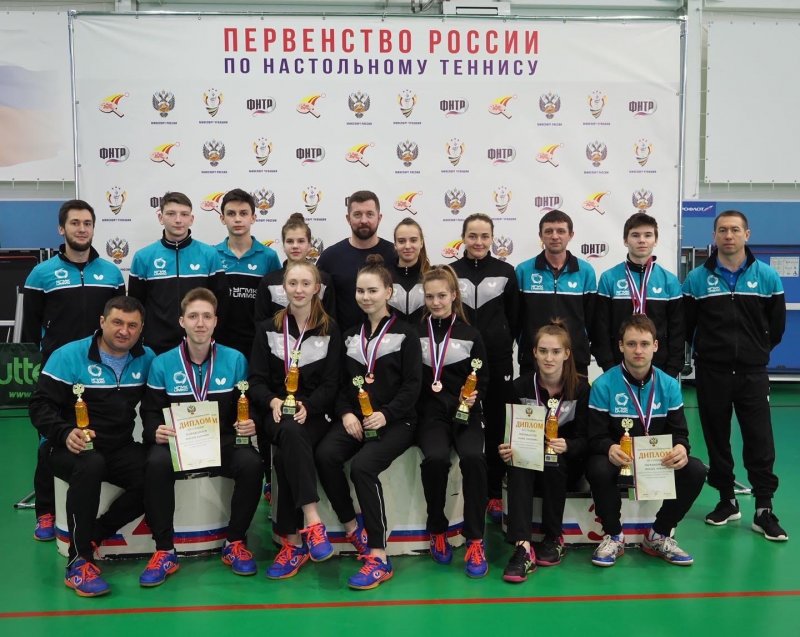 UMMC athletes won seven medals at the Russian table tennis championship, which was held in Cheboksary from March 23 to 28.

Four of them were won in doubles. Among the girls, third places were taken by Maria Stepanova together with Anastasia Stepanova, as well as the duet of Vera Smirnova with Margarita Murzina.

Semyon Shevnin, together with Mikhail Rozhkov, and Maxim Kaburkin, who performed in pair competitions with a representative Moscow by Ilya Anokhin.

In the semifinals, our tennis players lost to Daniil Cherkes and Vladislav Makarov, respectively.

In singles Arina Zyryanova, who was among the 16 strongest tennis players in the country, was the best among girls.

According to the results of the entire tournament, the national team of the Sverdlovsk region took the second overall team place. Recall that at the previous national championship under 19 years old, our athletes were left without medals.

Despite the high place, the coach of KNT UMMC and the national team of the Sverdlovsk region Stanislav Zlobin believes that the team has a lot to strive for. “There has been progress, but this championship, I think, was a tournament of lost hopes. Because the girls could win bronze in the team tournament, and the guys could become gold. Our young guys, Ilya Konyukhov and Serafim Orlov, fought very seriously to get into the top eight. If it were a little different - there would be more of our guys on the podium, we could take the first team place. We will continue to work, we are adding a lot with each tournament, ”he commented on the results of the Russian championship.

Now the UMMC tennis players are waiting for the Russian championship. Seven athletes of the club got on it: Artur Abusev, Danila Travin, Semyon Shevnin, Serafim Orlov, Ilya Konyukhov, Vera Smirnova and Maria Stepanoav. The championship will be held from 13 to 18 April in Moscow.

On this topic
UMMC tennis players won silver in the team tournament at the Russian championship
Nine medals were won by UMMC sambo wrestlers at the Russian Championship
Vladimir Gladkikh from UMMC Sambo Club - World Champion
All-Russian table tennis competition "Step into the future" started in the Sverdlovsk region
The best tennis players of Russia U11 have been identified in Verkhnyaya Pyshma
The best young tennis players of the country came to Verkhnyaya Pyshma
Добавить комментарий
Комментарии (0)
News Analytics
Rescuers continue to search for 13 missing iron ore miners in North China12-06-2021, 15:39
European Union extends protective quotas on steel supplies for another three12-06-2021, 11:31
Metallurgical plants in the temporarily occupied territory of Donbass appointed12-06-2021, 10:59
JSC "Turboatom" was visited by representatives of CJSC "Novokramatorsk Machine12-06-2021, 10:43
One of the leading mining enterprises in Ukraine announced the blocking of work12-06-2021, 10:37
Vaccinations fuel demand for platinum - World Platinum Investment Council08-06-2021, 12:55
Sharp price growth continues in the rolled metal market - Ukrpromvneshexpertiza08-06-2021, 11:04
Analysts note overheating of the global scrap metal market01-06-2021, 13:28
Hydrogen-fueled steelmaking could be competitive after 2050 - McKinsey19-05-2021, 14:22
Steel raw material prices are skyrocketing across the board18-05-2021, 12:34
Sign in with: