Metallurgists of MMSK will have a new depot 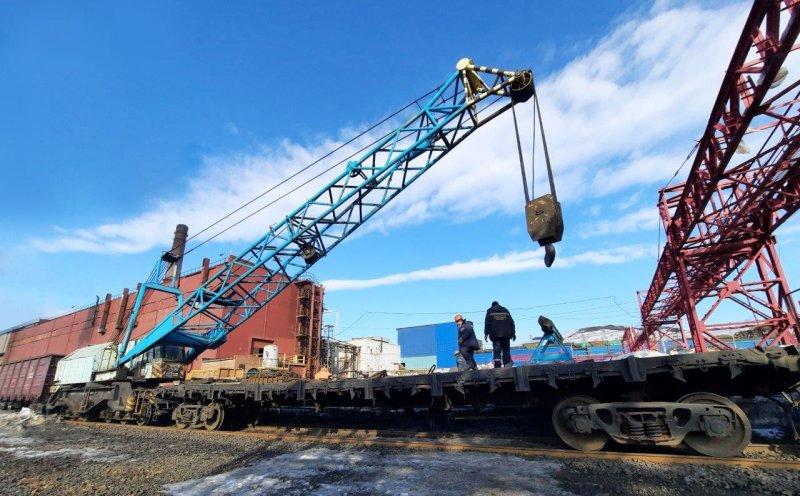 At Mednogorsk MSK (an enterprise of the UMMC metallurgical complex), the first cubic meters of concrete are poured into the base of the railway depot.

The cost of the railway carriage depot will be about 50 million rubles. The building, measuring 16x40 meters at the base and 13.7 meters high, will consist of a metal supporting frame with columnar foundations. Wall and roofing sandwich panels with insulation made of polyisocyanurate foam 100 and 150 mm thick will be used in the decoration of the outer fencing. The depot will house a repair area for diesel locomotives and carriages, a locksmith, a turning, an individual heating station.

- According to the design documentation, the rolling stock upon admission for repair is cleaned with compressed air and hot water by a mobile unit, as well as a high pressure washer. The workplace for the inspection of the running gear, traction motors and hydraulic transmissions is equipped with inspection ditches 21 meters long. Dismantling and installation of locomotive and wagon assemblies, supply of materials and spare parts will be carried out by a crane with a lifting capacity of 10 tons with a remote radio control, says the head of the railway workshop Alexei Shchigel.

The construction of a new production facility for the railway workshop of MMSK is carried out within the framework of the target program on the concentration of objects of structural divisions within the boundaries of one industrial zone of a metallurgical enterprise. Two years ago, this was how the repair shops and garages of the auto-tractor workshop were transferred to the territory of the plant.

- The existing depot dates back to the 30s of the last century, when the construction of a copper-sulfur plant began. The place of its deployment fit into the logistics of the movement of raw materials and goods from the Mednogorsk station to the metallurgical enterprise and back, - says the head of the railroad track service Yevgeny Savenkov.

The MMSK carried certain financial costs, both for the organization of access control with security, and utility costs for water and heat, which had to be purchased from third-party organizations. Note that the production and administrative buildings of the enterprise use secondary fuel and energy resources for heating from the operation of metallurgical furnaces and units.

- These arguments played an important role in justifying the construction of a new depot and transferring the railway infrastructure to the territory of the plant in order to optimization of non-production costs, - said Andrey Ibragimov, General Director of MMSK.

The depot is scheduled to be commissioned at the end of 2021. We add that the rolling stock of the railway shop includes four diesel locomotives TEM2-UGMK, which were modernized at the Shadrinsky Automobile Unit Plant and two TEM2N-UMMC manufactured at the same plant. The shop has three self-propelled cranes and a locomotive, as well as rail tank cars. The length of the tracks is about 27 km.

Note that in addition to the Mednogorsk copper and sulfur plant in the Orenburg region, there are such enterprises of the Ural mining and metallurgical company as PJSC "Gaysky GOK" (Gai), specializing in mining of copper pyrite ore by underground and opencast methods and its processing at its own processing plant, Orenburg Radiator LLC (Orenburg), specializing in the development, implementation and serial production of radiator products.

Обозреватель рынка стали и цветных металлов. Пишу аналитические обзоры рынка для Металлургпром. More news and analytics on Metallurgprom telegram channel - subscribe to get up-to-date market information and price forecasts faster than others.
Сomments
Добавить комментарий
Комментарии (0)
On this topic
MMSK renews rolling stock and modernizes production
Construction of a warehouse for charge materials began at MMSK
A new oxygen station was launched in Mednogorsk and a fitness center was put into operation
In Mednogorsk, the construction of a new oxygen station was completed and a sports and recreation
MMSK veterans took part in the sports and creative marathon "Territory Life"
Unloading of raw materials was accelerated at MMSK
News Analytics
Chinese steel exports up 28.2% - customs data07-12-2022, 23:43
UK approves construction of new coal mine for the first time in 30 years07-12-2022, 23:29
Analysts predict 5% annual growth in the iron casting market through 203006-12-2022, 12:44
Oman to build a new steel plant worth $3 billion in 3 years06-12-2022, 12:14
Tesla's Shanghai gigafactory set a new record for electric vehicle shipments in05-12-2022, 15:24
Analysts predict 5% annual growth in the iron casting market through 203006-12-2022, 12:44
Commodity prices will fall, metals quotes will rise slightly - Focus Economics28-11-2022, 13:28
Platinum market to face shortage next year - WPIC22-11-2022, 18:25
Global steel demand falls and will fall by 2.3% in 2022: WorldSteel19-10-2022, 23:12
Iron ore prices fall to 11-month low15-10-2022, 10:36
Sign in with: