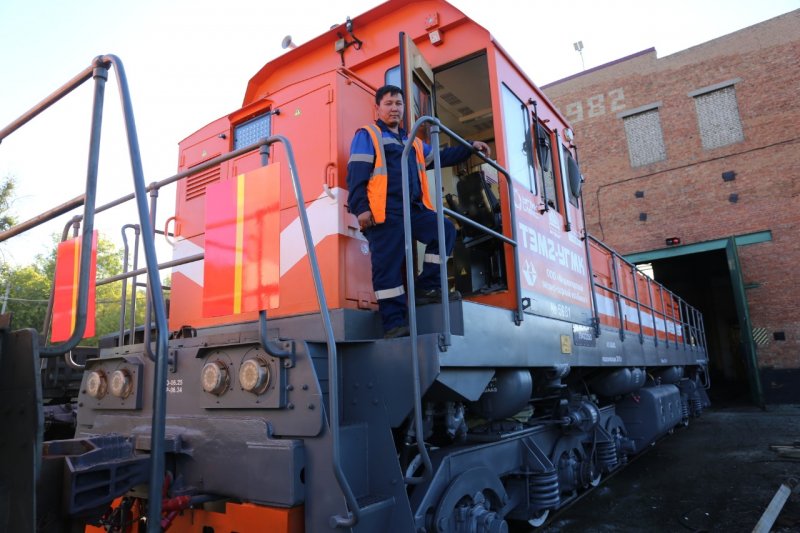 In the period from 2014 to 2018, four obsolete TEM2 locomotives were modernized, which are currently involved in the transportation of goods and raw materials on the territory of the copper and sulfur plant. In addition, in the past two years, MMSK received two new diesel locomotives TEM2N-UMMC, which were manufactured at ShAAZ. The total cost of renewing the rolling stock of the railway shop amounted to more than 400 million rubles.

- On the diesel locomotive TEM2-UGMK, owned by Mednogorsk MSK, we performed maintenance of traction motors and wheelsets, draft gears, auto brake and automatic coupler equipment, systems safety, carts, diesel, compressor and other units. We replaced the out-of-order electrical equipment, carried out rheostat tests and tests on a sprinkler installation, restored the paint and varnish coating, - said Ivan Karpukhin, Deputy Director for Quality for Railway and Special Equipment of ShAAZ JSC.

- These locomotives fully justified the pledges in them operating costs. Savings of up to 30% on fuels and lubricants alone, which makes it possible to reduce emissions of exhaust gases into the atmosphere from operating railway equipment. It is no coincidence that the last two locomotives were purchased under the Clean Air environmental program, says the head of the railway center Alexei Shchigel.

Note that this project is one of many implemented at MMSK since the moment it entered the sphere of influence of UMMC ... In recent years, the plant has achieved a reduction in emissions from 120 thousand tons to 7 thousand tons with a stable increase in the output of marketable products. Reconstruction and technical re-equipment of the chemical and metallurgical complex, replacement and modernization of gas-cleaning and dust-collecting equipment made it possible to reduce emissions by more than 17 times.

- Investments in the technical re-equipment of the chemical and metallurgical complex of MMSK are, first of all, the result of stable the work of the enterprise and the team. They have made a tangible result in increasing the production of basic products and pursuing an active social policy at the enterprise and in the city of Mednogorsk. If we compare the position of the plant now and 15 years ago, then these are two fundamentally different enterprises, - says the general director of MMSK Ilfat Iskhakov.

Among the most significant projects implemented in the copper smelting shop is the technical re-equipment of the converter room gas cleaning with the introduction of evaporative cooling units, the installation of bag filters and an aspiration system. In the sulfuric acid workshop, more than 2 billion rubles were spent on the construction of the first and second technological systems. The change in the metallurgical gas processing scheme from a non-stationary oxidation method to a stationary one made it possible to process gases with a higher sulfur dioxide content. The gas utilization rate has increased from 85% to 98%. In 2021, the second stage of the oxygen station was commissioned, which made it possible to ensure the stable operation of metallurgical units and a sulfuric acid workshop. The costs amounted to 1.6 billion rubles. The total investments in the implementation of environmental projects implemented by Mednogorsk MRC amounted to about 9 billion rubles.

We should add that the plant is currently building a warehouse for charge materials with a volume of 20 thousand tons of raw materials. The facility, which is scheduled to be commissioned at the end of 2022, will not only make it possible to forget about the storage of copper-containing raw materials in the open air, but also significantly expand the capabilities of the copper smelter in increasing the productivity of furnaces and units. The construction of a railway depot is in full swing. The construction of a new production facility for the railway workshop is aimed at reducing the cost of transportation within the enterprise. The technical re-equipment of the copper-smelting shop, which began in 2020, continues. These are the objects "Unit for unloading briquette" and "Site for the preparation of recycled slag". In 2021, it is planned to spend about 400 million rubles of capital investments at Mednogorsk MSK.

Note that in addition to MMSK, such enterprises of the Ural Mining and Metallurgical Company as Orenburg Radiator LLC (Orenburg) operate in the Orenburg Region. , specializing in the development, implementation and serial production of radiator products, and PJSC "Gaysky GOK" (Gai), specializing in the extraction of copper pyrite ore by underground and open pit methods and its processing at its own processing plant.