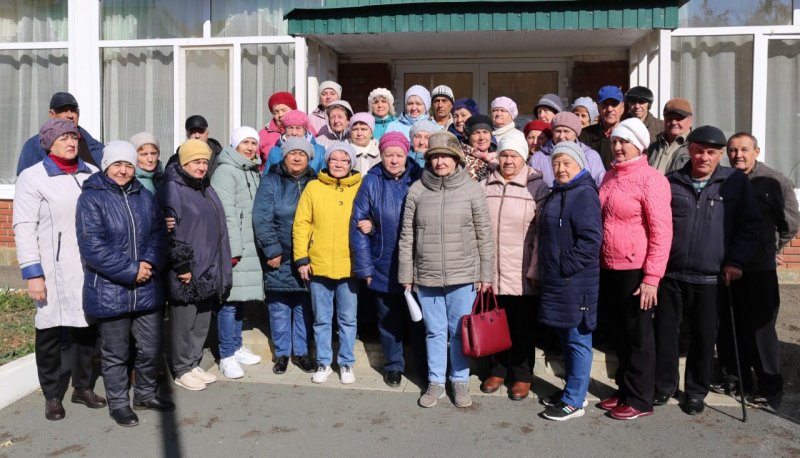 Veterans of Mednogorsk MSK (an enterprise of the metallurgical complex of UMMC) celebrated the Day of the Elderly at the sports grounds of the suburban health camp "Forest Fairy Tale".

Forty activists of the MMC veteran sports organization received an invitation from the MMC veteran sports organization , which was organized by the cultural workers of the city House of Culture "Yubileiny". The main idea of ​​outdoor recreation is movement in the game. The veterans were divided into 5 teams of 8 people each. The captains received itinerary lists with six stops, where the participants were offered various games and tasks for team building (team building). - The team spirit that has been inherent in veterans since their work at the metallurgical enterprise was also manifested in this comic sports marathon. Mutual assistance, a sense of humor, competitive excitement - these qualities helped the elderly to throw off another year and gain confidence in active movement, says Tatyana Druchinana, head of the social development department of the MMSK. Note that social support for veterans is an important area in the activities of the plant. Today in the ranks of the veteran organization of the city-forming enterprise there are about one and a half thousand elderly people. Among them are war veterans and home front workers, holders of well-deserved government awards and titles. With the incorporation of MMSK into the UMMC, care for veterans took on a systemic character. A voluntary public association was created, the daily work of which is coordinated by a council of 18 people.

- These are active people who have rich life and professional experience. Each member of the council has its own line of work, distributed according to the names of the workshops of the plant. For example, the list of former employees of the copper smelter includes more than 300 people. Newly arriving members of the organization are being registered, the implementation of planned plans to provide the necessary assistance to the elderly is monitored, - says Tatyana Anufrieva, chairman of the council of veterans of the MMSK. - Veterans of the plant are keenly interested in the achievements of the metallurgical team. For them, familiarization excursions are organized, they can see newly built production facilities, talk with employees of the main workshops and share memories of past working days, says Tatyana Vedeneeva, Deputy General Director for Human Resources and General Issues of MMSK. enterprises the necessary funds. The cost estimate provides for material support for the elderly, financing of recreational activities in the health resort of the plant - dispensary "Metallurg" and the country camp "Lesnaya Skazka". In the practice of council members, visiting seriously ill patients at home and purchasing medicines, giving gifts to anniversaries and other actions with the participation of the youth and trade union organization of the MMSK. - You have a great life behind you. Your knowledge and rich experience are especially important in modern conditions, when, along with the initiative of the young, the life wisdom of the elders is required. Particular respect for you is caused by active participation in the public life of the city, an indifferent attitude to the events taking place at the plant, - said the general director of MMSK Ilfat Iskhakov at a meeting with the veterans of the enterprise. Drawing on the rich experience and participation of veterans in the development of the copper and sulfur plant and the city, an important component of personnel policy is the continuity of generations, which is very important for the formation of a holistic perception of the MMSK as a city-forming enterprise, which accounts for more than 70% of the built housing stock and social facilities of the municipality. We add that in the last four years alone, the plant has invested about 400 million rubles in the renovation of the city polyclinic and the children's art school, the construction of a sports and recreation center, and the opening of sambo and weightlifting gyms. The next step is the construction of an indoor swimming pool. The plant actively participates in the implementation of the program "Comfortable urban environment", supports institutions of the social sphere and utilities. In addition to the Mednogorsk copper and sulfur plant, such enterprises of the Ural for the extraction of copper pyrite ore by underground and open-pit methods and its processing at its own processing plant, Orenburg Radiator LLC (Orenburg), specializing in the development, implementation and serial production of radiator