Triumph of young tennis players of UMMC on Victory Day 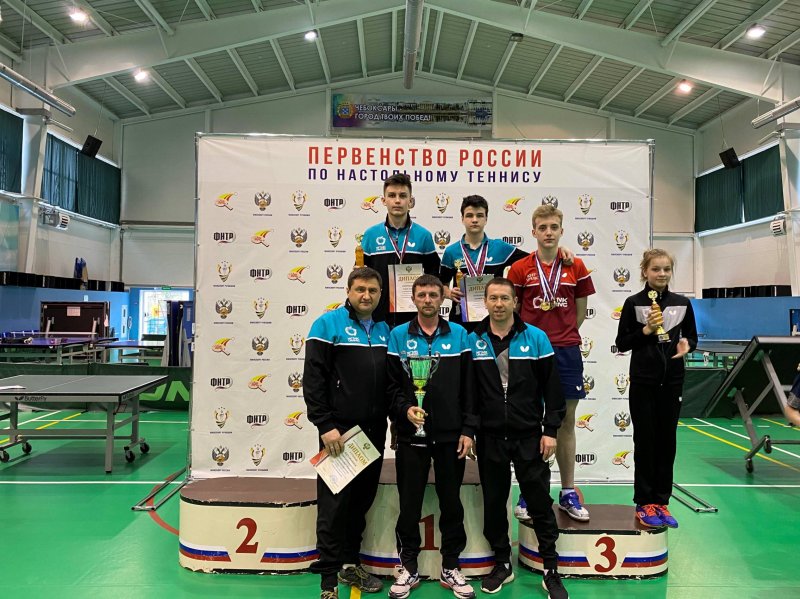 UMMC tennis players won eight medals for the Sverdlovsk region at the Russian table tennis championship among athletes under 16, which was held in Cheboksary from May 4 to 9.

Ramis Tuychiev, Ilya Konyukhov as part of the Sverdlovsk region national team and Serafim Orlov won gold in the team tournament. In the final, they left no chances to tennis players from Moscow - 3: 0.

The youths' performance in the singles was no less triumphant. Having confidently won the semifinal matches, Orlov and Konyukhov, teammates, the first two seeded numbers of the tournament, clashed for the gold.

During the first four games, tennis players who know each other's game perfectly took turns coming out ahead. In the fifth set, the winner was determined only when the score was 18:16 in favor of Konyukhov. This moment became a turning point. Ilya won the next game with a score of 11: 4 and became the winner of the Russian championship.

Ramis Tuychiev won the men's doubles together with the representative of the Moscow region Olgerd Kiselev, silver medals were won by the Konyukhov /Orlov duet.

UMMC tennis player Zlata Terekhova, who competed with Arina Abdullina, an athlete from the Orenburg region, took bronze among girls in doubles.

Terekhova and Orlov won silver in the mixed doubles, and Ilya Konyukhov and Anastasia Ivanova from Cheboksary.

Thanks to this result, the national team of the Sverdlovsk region took the first place in the overall team classification, the second place was taken by the Orenburg region, the athletes of Moscow became the third.

Обозреватель рынка стали и цветных металлов. Пишу аналитические обзоры рынка для Металлургпром. More news and analytics on Metallurgprom telegram channel - subscribe to get up-to-date market information and price forecasts faster than others.
Сomments
Добавить комментарий
Комментарии (0)
On this topic
TMK Held II WorldSkills Corporate Championship - Games of the Masters
One of the best children's tennis tournaments in the country "UMMC-Open" has started in
NLMK Group intranet recognized as one of the best in the world
Battle of 100-year-old cars was held in Yekaterinburg
TMK took part in Steel Safety Day-2019
Severstal 2Q & 1H 2019 operating results
News Analytics
War in Ukraine to accelerate world economy transition to clean energy - BP30-01-2023, 11:49
ArcelorMittal invests $120m in US green steel company30-01-2023, 11:11
The United States refused to comply with the decision of the WTO on tariffs on29-01-2023, 20:08
China remains the world leader in shipbuilding with a 50% share of new shipyard29-01-2023, 12:35
Prices for metal products in Ukraine increased by 26% last year29-01-2023, 12:06
S&P: Russia will continue to dominate the steel export market in the Black05-01-2023, 11:22
Fitch Analysts Predict Big Drop in Global Steel Consumption This Year14-12-2022, 13:59
Analysts predict 5% annual growth in the iron casting market through 203006-12-2022, 12:44
Commodity prices will fall, metals quotes will rise slightly - Focus Economics28-11-2022, 13:28
Platinum market to face shortage next year - WPIC22-11-2022, 18:25
Sign in with: