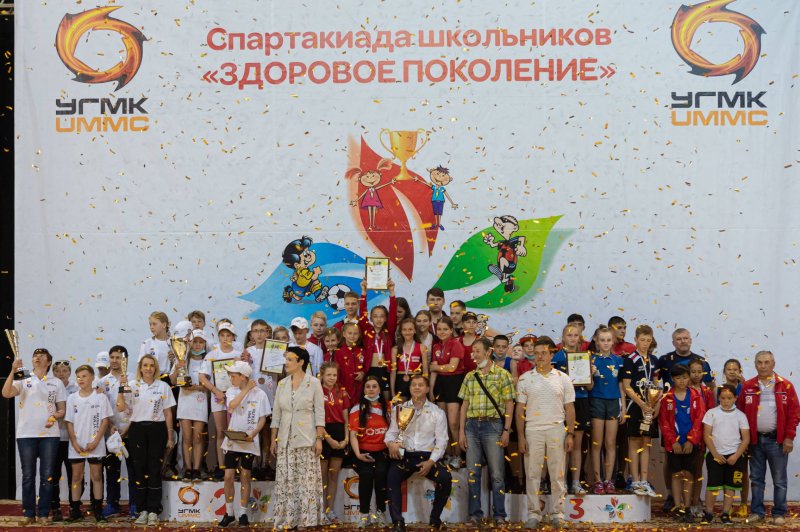 In total, 18 sets of awards were played in individual and team events. The prize fund of the jubilee sports festival amounted to about 1.5 million rubles. All participating teams received certificates for the purchase of sports equipment.

The competition took place for two days at the best sites of the urban district of Verkhnyaya Pyshma. Schoolchildren competed in three disciplines: athletics (based on the Leader sports school), table tennis (in the Baltym sports complex) and chess (in the Quantorium children's technopark).

This time 240 athletes took part in the Healthy Generation Olympics (2008-2009). from 14 settlements of the Sverdlovsk, Kurgan, Orenburg regions and the Republic of Bashkortostan. Traditionally, the team from each territory was supported by one of the enterprises of the Ural Mining and Metallurgical Company. Also, the team of the Center for Helping Families and Children of the Nizhneserginsky District from the urban-type settlement Bisert joined the wrestling. Her participation in the Olympics was ensured by the Children of Russia Charitable Foundation (created at the initiative of UMMC CEO Andrey Kozitsyn).

Обозреватель рынка стали и цветных металлов. Пишу аналитические обзоры рынка для Металлургпром. More news and analytics on Metallurgprom telegram channel - subscribe to get up-to-date market information and price forecasts faster than others.
Сomments
Добавить комментарий
Комментарии (0)
On this topic
The Spartakiad of schoolchildren "Healthy Generation" started in the Sverdlovsk Region
The eternal flame from the factory furnace, Victory Waltz, Procession of military equipment and a
Young athletes fought for the prizes of the children's hockey tournament dedicated to the memory of
Sverdlovsk schoolchildren played the "UMMC Cup" in rapid chess
Synchronized swimmers from Verkhnyaya Pyshma took first place in the tournament of Angelica Timanina
In Yekaterinburg, a festive show "Family" took place in honor of the 20th anniversary of
News Analytics
China's iron ore output to rise in 2023 as new projects are launched30-11-2022, 18:10
"Centravis" agreed to supply a new batch of seamless pipes to a30-11-2022, 16:51
Metinvest enterprises in Ukraine resumed work after massive shelling of29-11-2022, 11:59
The European Council added the violation of restrictive measures (sanctions) to28-11-2022, 14:22
The abolition of export duty in India may reduce the price of Turkish steel28-11-2022, 14:07
Commodity prices will fall, metals quotes will rise slightly - Focus Economics28-11-2022, 13:28
Platinum market to face shortage next year - WPIC22-11-2022, 18:25
Global steel demand falls and will fall by 2.3% in 2022: WorldSteel19-10-2022, 23:12
Iron ore prices fall to 11-month low15-10-2022, 10:36
China production cuts in winter will give limited boost to steel markets -15-09-2022, 10:09
Sign in with: