The exhibits of the UMMC museum were sent to battle 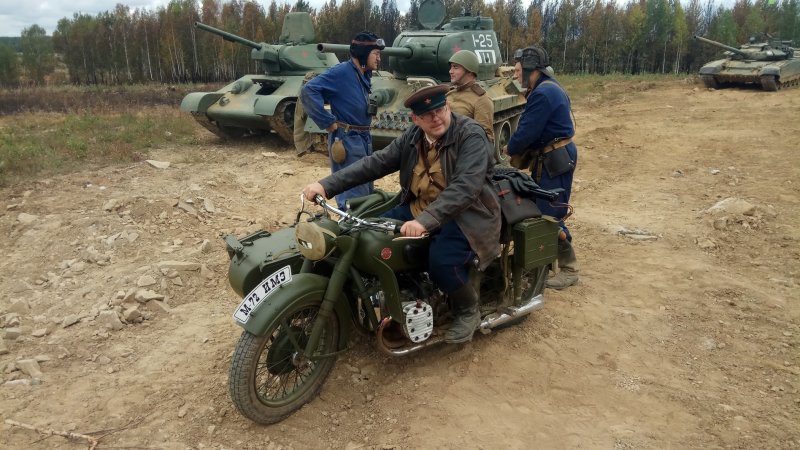 Running exhibits of the UMMC Museum Complex were involved in the reconstruction of the battle of the famous Jassy-Kishinev operation of the Great Patriotic War. The reconstruction was carried out the day before as part of the demonstration program of the military-technical forum "Army-2021", organized by the forces of the Central Military District. To play a tactical episode, two tanks - T-34 and T-70, as well as a motorcycle M-72 - all this is the running technique of the exhibition center "Parade Roster". It contains exhibits of the UMMC Museum Complex, annually, on Victory Day, taking part in the festive procession of the mechanized column. This time, the historical equipment was sent to a demonstration battle. The Yassy-Kishinev operation (August 20 - 29, 1944) is one of the most successful Soviet strategic operations of the USSR Armed Forces, one of the “ten Stalinist strikes”. It ended with the victory of the Red Army troops, the liberation of the Moldavian SSR and the complete defeat of the southern wing of the German front. The tactical episode of this large operation began with the passage of a motorcycle. It was controlled by a participant in the reconstruction, dressed in the uniform of a scout. The M-72 was produced in a large series since 1941 and was actively used in the intelligence units of the Red Army. Following the reconnaissance, two rare tanks entered the tactical field. They were equipped with means of imitation of firing from cannons and machine guns. According to the drawing scenario, one of the tanks was knocked out by an enemy saboteur, but the Red Army reinforcements that came up not only recaptured the immobilized vehicle from the German soldiers, but also went on the offensive. A red flag was hoisted over the enemy fortifications. The light tank T-70 and post-war artillery that came to the Sverdlovsky training ground were demonstrated as part of the static display of the Army-2021 military-technical forum. Upon its completion, the equipment returned to its permanent exhibition places in the UMMC Museum Complex.

Финансовая аналитика, прогнозы цен на сталь, железную руду, уголь и другие сырьевые товары. More news and analytics on Metallurgprom telegram channel - subscribe to get up-to-date market information and price forecasts faster than others.
Сomments
Добавить комментарий
Комментарии (0)
On this topic
NLMK Group intranet recognized as one of the best in the world
One of the best children's tennis tournaments in the country "UMMC-Open" has started in
How to download and install Google Play Market
The ChMK team will represent Chelyabinsk in the final of the Ural "Battle of the
TMK took part in Steel Safety Day-2019
"Holding Cable Alliance" presented the modern design for the construction industry
News Analytics
European steel price rise that began in January will be short-lived - MEPS26-01-2023, 14:44
Steel production in China rose in the first decade of January26-01-2023, 12:30
UK is ready to give 300 million pounds to save British Steel20-01-2023, 21:31
Carriage building plant in Kremenchug stopped production due to debts20-01-2023, 21:11
Europe's passenger car market records its worst year since the turn of the20-01-2023, 21:03
S&P: Russia will continue to dominate the steel export market in the Black05-01-2023, 11:22
Fitch Analysts Predict Big Drop in Global Steel Consumption This Year14-12-2022, 13:59
Analysts predict 5% annual growth in the iron casting market through 203006-12-2022, 12:44
Commodity prices will fall, metals quotes will rise slightly - Focus Economics28-11-2022, 13:28
Platinum market to face shortage next year - WPIC22-11-2022, 18:25
Sign in with: