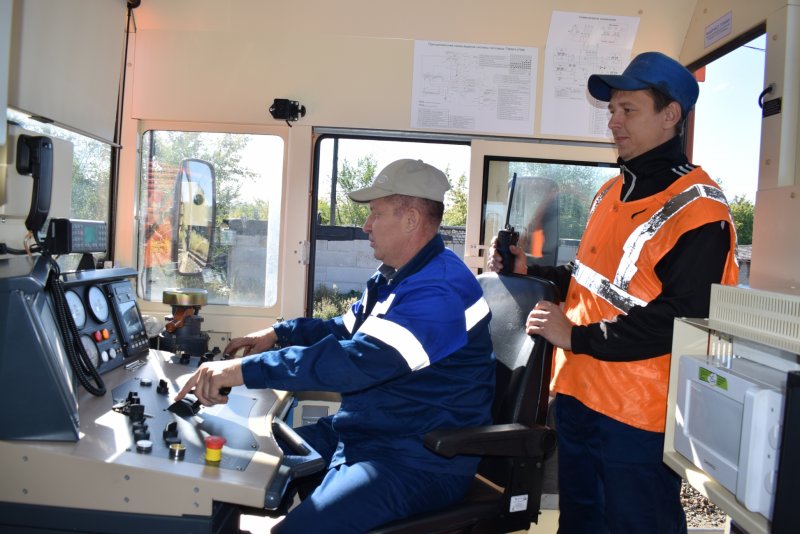 PJSC Gaysky GOK (an enterprise of the UMMC raw materials complex) received a new modernized diesel locomotive of the TEM2N-UMMC brand within the framework of the production modernization program. This six-axle single-section locomotive with a diesel output of 1217 hp. with electric transmission of alternating-direct current is intended for carrying out export, shunting and technological work.

“We are gradually renewing our fleet of rolling stock. Today, shunting works at our enterprise are performed by eight diesel locomotives, of which six are produced by the Shadrinsky Automotive Aggregate Plant, ”says Alexander Makogon, head of the railway department of the Gaysky GOK. - It should be noted that after the operation of new, as well as modernized at ShAAZ locomotives, we see real savings and efficiency of their work. Fuel savings are about 20%. And, of course, a significant improvement in the working conditions of our locomotive crews should be noted. ” ITAG-900/175 (Hungary), mounted on a common diesel frame. The diesel engine is equipped with an electronic control system, all the main elements of which are installed directly on the engine. In addition, the new diesel locomotive differs from previous brands with an auxiliary diesel generator set, which, when the main engine is stopped, continues to ensure the functioning of the locomotive's control and lighting circuits, charging the battery, household devices in the driver's cabin, etc. This can significantly reduce the overall fuel consumption of the locomotive, reduce the amount of harmful emissions, as well as reduce maintenance costs due to significant savings in the main engine's service life.

Everything is automated in the operation of the new locomotive. Two identical control panels are located diagonally in the driver's cab. They are equipped with multifunctional color displays that allow you to control the operation of all systems and units of the locomotive.

“It is very comfortable to work on such equipment: convenient control, there is an air conditioner, two heaters that supply heated air to the required areas of the cab. A household refrigerator and a microwave oven are installed, - the locomotive driver Vasil Mambetov shares his impressions. - This locomotive is also distinguished by the reduction of diesel noise due to the installed muffler. Therefore, the cabin has become much quieter. ”

The new locomotive, like all its“ brothers ”, is painted in a corporate color scheme with images of the UMMC and Gaysky GOK logos and has reflective elements.

The TEM2N-UMMC diesel locomotive has a certificate for compliance with the Technical Regulations of the Customs Union (TR CU 001/2011) "On the safety of railway rolling stock", according to which the service life of these locomotives is 62 years.

Note that in addition to PJSC "Gaysky GOK" in the Orenburg region, there are such enterprises of the Ural mining and metallurgical company as LLC "Orenburgsky radiator" (Orenburg), specializing in the development, implementation and serial production of radiator products, and LLC "Mednogorsk copper-sulfuric plant" (Mednogorsk) - an enterprise of the metallurgical complex of UMMC.

On this topic
"Kuzbassrazrezugol" has got the second Shadrinskiy locomotive
SHAAZ modernize shunting locomotives for the JSC MMC Norilsk Nickel
SHAAZ modernize shunting locomotives for "Norilsk Nickel"
An audit was carried out at SHAAZ as part of the certification of a new diesel locomotive TEM2N-UMMC
Diesel locomotive TGM6-UMMC is certified for compliance with the Technical Regulations of the
A new locomotive entered the MMSK railway workshop
Partner news
Сomments
Добавить комментарий
Комментарии (0)
News Analytics
Global platinum production to grow by 22% in 202120-10-2021, 16:32
Private astronautics will make Elon Musk a trillionaire - Morgan Stanley analyst20-10-2021, 16:42
How the US became the world's largest Bitcoin mining hub20-10-2021, 13:26
New gold rush begins in South Africa due to coronavirus pandemic19-10-2021, 20:55
Siemens specialists conducted an audit of Interpipe as a qualified supplier19-10-2021, 18:32
Global platinum production to grow by 22% in 202120-10-2021, 16:32
In Europe, the stainless steel market unexpectedly "sank" - MEPS30-09-2021, 12:08
Oil prices to surpass $ 90 by year end due to shortages - Goldman Sachs27-09-2021, 10:58
Moody's changes its outlook for the mining and metals industry from "positive"14-09-2021, 18:39
European steel prices decline from summer highs and remain stable high04-09-2021, 10:38
Sign in with: