A real fairy tale: why Dombay is a great option for winter holidays

Dombay is a small resort village in Karachay-Cherkessia, located at the foot of the Main ridge of the Caucasus Mountains. Recently it has been called the “Tourist Mecca of the Caucasus”. We will tell you more about what is interesting about the resort in this article. 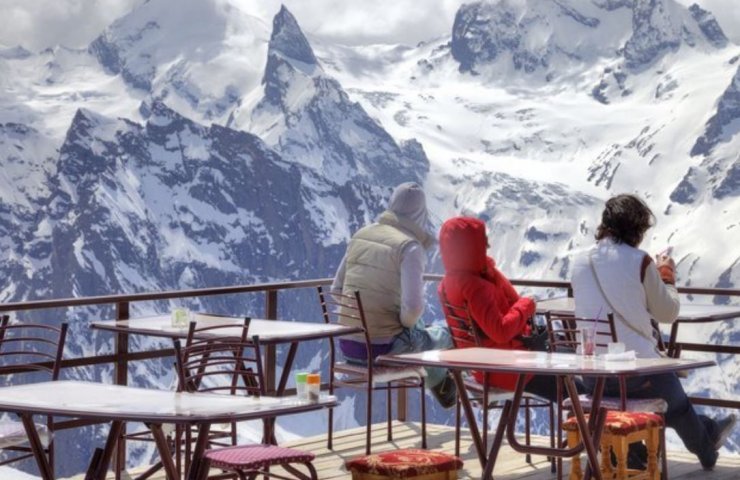 The name of the village is translated from the mountain languages ​​as “Bison”. One of the legends says that earlier these powerful animals were ubiquitous in the local forests. Another story tells about the hunter Dommai, who, in pursuit of game, fell from a high mountain into an abyss. In memory of him, the area was named Dombai.

These places have been inhabited since ancient times. And two hundred years ago, people paid attention to the healing properties of mountain air. Dombay gradually became a place of active recreation. The years of the Great Patriotic War became difficult for the village. In the post-war period, the resort plunged into oblivion, but with the onset of the 60s, the construction of the first large hotel in the region was started. The tourists are back.

The uniqueness of Dombai attracted the attention of many. In the early seventies, Finnish architects donated an unusual structure to the government as a sign of friendship, known as the Tarelka Hotel. Today it is an architectural monument of the twentieth century. The resort has grown at a rapid pace with infrastructure. Chair lifts appeared, the sphere of mountaineering tourism developed. The Mountain Peaks Hotel became an international youth center where all foreigners rested. The slopes of the mountains were improved and new ski slopes were opened. The events of the nineties brought decay to this region again. Current construction projects dragged on, the economy required serious measures. By its actions at the beginning of the 2000s, the government of Karachay-Cherkessia took the situation into its own hands and ensured an inflow of investments into the region.

Today Dombay is a modern all-season resort. There are hotels for every taste and budget. The ski area has been replenished with a new complex of cable cars. Rental equipment, snowmobiles, ATVs are available. In total, the resort has twelve tracks of varying difficulty and speed. The maximum length of the track is more than five km, and the average height difference is 1450 meters. Slopes on the Dombai slopes are suitable not only for experienced skiers, but also for beginners.

Other types of outdoor activities are also developed in Dombai. For example, to fly with an instructor on a paraglider or try yourself in speedriding (a combination of a paraglider with alpine skiing). Rest in Dombai can be decorated with hikes to the Murudzhinsky lakes, a hiking trail in the surroundings. You can go on an excursion to the Central Estate of the Teberda Nature Reserve - it is just a few kilometers from Dombai, and guests are welcome there all year round. Hotels and hostels offer tourists the following entertainment to choose from: skating on ice skating rinks within walking distance, on sledges and ice-skating; relaxation in the sauna, pool; bowling or disco. Photographic inspiration can also come from the unique natural landscape.

The nature of Dombai is rich not only in majestic snow-capped peaks, but also in fast mountain rivers, many waterfalls, the largest glaciers, and emerald lakes. Turje Lake is a striking attraction. The beautiful Alibek glacier is also popular with tourists. The visiting card of the resort is Belalakaya mountain, which rushed up to 3861 meters. Not far from the village are the beautiful gorges of Gonachkhir and Amanauz. The average winter temperature here is -5 degrees, the sun is shining brightly and there is almost no wind. The peculiarities of the climate and the natural protection of the village from bad weather allow you to spend a significant part of your time outdoors.

Travel to Dombay by bus

Dombay is rightfully considered one of the best ski resorts in Russia. Purity and freshness of the air saturated with needles; equipped ski slopes; the variety of leisure activities and variability of hotels attract tourists from different parts of the country. The cozy atmosphere of winter Dombai will not leave anyone indifferent, and you will want to come back here again and again.

True, you need to think over the road in advance. At the moment, the ways to get to the resort are not as convenient as, for example, to Krasnaya Polyana (Adler). Air travel and travel by train to Dombai will not do without transfers by taxi or public bus, which will have to wait for a while.

However, for lovers of road travel, the Voronezh carrier company "Make Your Dreams Come True" has opened a bus route “ Moscow-Voronezh-Dombay " and back " Dombai-Voronezh- Moscow ”. The direct route eliminates the need to look for transport for a transfer. The road runs through Rostov-on-Don, Armavir, Nevinnomyssk. Professional drivers and comfortable interior of the bus will make the trip pleasant and safe.

Tourists have an excellent opportunity to buy a bus ticket on their own at gobus.online. System y

Recommended:
ArcelorMittal increases prices for coiled steel again in the EU and immediately by 30 euros per ton
In 2020, the total capacity of Ukraine's "green" energy grew by 22%
Interpipe reduced sales of pipe and railway products in 2020
On this topic
Steel suit: from knightly armor to smart workwear
Where to order a selling text on a website in 2020
Yuzhmash told whether it is possible to launch reusable rockets from the Black Sea
Whether to go to the sea in the summer of 2020
What "zwiki" and why Japanese blacksmiths known to the whole world? (Video)
UN report: growing inequality is the main obstacle for the development of
Add a comment
Сomments (0)
News Analytics
The price bubble in the US steel market has inflated to its maximum - the only27-01-2021, 10:00
Global steel production down 0.9% in 2020 - World Steel Association27-01-2021, 09:59
Interpipe fully repaid Eurobonds debt27-01-2021, 09:49
EVRAZ considers potential spin-off of coal business27-01-2021, 09:46
China to accelerate development of all-weather batteries for electric vehicles27-01-2021, 09:44
China will overtake the United States to become the world's largest economy in27-12-2020, 12:04
The shortage in the US steel market will last at least until the end of the25-12-2020, 11:36
Steel production in China to surpass one billion tons this year23-12-2020, 10:59
Iron ore prices hit seven-year high and continue to rise15-12-2020, 10:26
Prices for metallurgical raw materials continue to rise in regional markets10-12-2020, 11:32
Sign in with: