A small guide about thick plate

There is no single standard in the world according to which a sheet is considered to be thick. 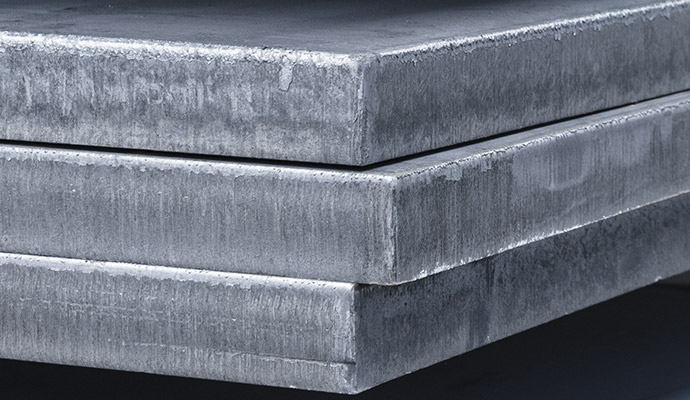 In one regulatory system, metal in sheets and rolls with a thickness of 4 mm or more, in another - from 3 mm, and in the data of various analytical agencies, the lower limit is taken as the lower limit either 5 mm or 6.5 mm, and then all 10 mm. However, without these products, it is impossible to imagine most industries: shipbuilding, construction, mechanical engineering, production of large-diameter pipes and boiler equipment.

The most demanded product in the heavy-plate segment is structural steel, which accounts for more than a third of the total consumption. It is followed by a shipworm with a quarter of the consumption share, and the third position is occupied by a high-strength sheet with a share of about 20%.

The thickest sheet in the world

According to the specialized international publication CRU, before the crisis, the design capacity for the production of thick plate was estimated at about 226 million tons per year, of which consumption was about 150 million tons. More than 75% of heavy-plate steel is consumed in Asian countries - in Singapore, China, South Korea and Japan, where in recent decades the center of world shipbuilding has moved in addition to the active development of infrastructure projects. Among other regions, heavy plate steel is in demand in Europe, North America and the CIS countries.

Shipbuilding, construction and mechanical engineering consume the most thick plates. Each of these segments has its own set of requirements for sheet metal, and it can be unique. For example, some steel can be certified according to two standards at once: shipbuilding and construction. For example, it is possible to melt and roll the construction grade S355J2 in such a way that its chemical composition and mechanical properties fully correspond to the A32 grade for shipbuilding. At the same time, there are steel grades that differ in chemical and physical-mechanical characteristics, as well as the state of delivery. For example, for the construction segment, it is important that a thick sheet of metal is welded well, and for certain applications in mechanical engineering, the ability of steel to resist abrasion is important.

Metinvest Group occupies about 2.4% of the total world production of thick plates. The main share of sales of these products falls on geographic Europe. It is here that five enterprises of the Group operate: Azovstal and Ilyich Iron and Steel Works in Ukraine, which together produce more than 4.3 million tons of heavy plate, Italian Ferriera Valsider and Metinvest Trametal, with a total capacity of about 1 million tons and British Spartan with a capacity of 200 thousand tons of thick sheet per year. These enterprises produce rolled products from continuously cast slabs produced by Ilyich Iron and Steel Works and Azovstal. Thus, Metinvest produces 5.5 million tonnes of heavy plate in Europe, which makes the Group the largest producer of this type of product in the region.

Thick plates are produced on reversible hot rolling mills or cut to length from hot rolled coils of appropriate thickness. Most often, thick-sheet metal is produced precisely by the hot-rolled method - this technology allows you to achieve the optimal combination of geometric accuracy, mechanical properties and surface quality. At the same time, there is no need to use a more expensive additional processing of cold rolling.

Sheet metal is produced from a slab that is heated in a furnace, then rolled in a hot rolling mill, cooled and cut.

The next stage is heat treatment (optional, if required by the standard or the customer): the sheet is reheated in ovens and cooled according to certain modes. An alternative method consists in the fact that immediately during the rolling process in the mills, such technological parameters are assigned that ensure the receipt of properties identical to those obtained with separate heating in the furnaces. For example, these days normalizing rolling has supplanted normalizing in furnaces for most industrial applications. This technology is several times cheaper, and the resulting structure and properties of rolled products fully correspond to those obtained during normalization in a furnace.

Heat treatment can be carried out under the conditions of the end user. For example, boron steel is supplied hot rolled to agricultural equipment manufacturers. For the production of harrows, machine builders first cut out the necessary part from a thick sheet, make holes in it, and then heat the part in an oven, shape it and cool it in water. Thus, the part acquires a different set of properties - it becomes high-strength and wear-resistant.

Additional options that a heavy plate manufacturer can offer are straightening and shot blasting. The first operation involves straightening the sheet on special machines or presses to improve flatness. And the second is cleaning the metal with a stream of steel shot from scale, rust

Recommended:
Automotive production in Ukraine began the year with a fall of 29%
Canada's economy plunges record 5.4% in 2020
Oil giant Shell goes into hydrogen and biofuels, abandoning oil
On this topic
Prospects for ship repair in Ukraine
Steel suit: from knightly armor to smart workwear
Blast furnace tragedy. Black page of the history of the Dnieper steel plant
Where to order a selling text on a website in 2020
Relentless degradation of the coal industry. Close Ukrainian mines?
As arranged "steel service center" in the camp for Syrian refugees
Add a comment
Сomments (0)
News Analytics
Metinvest will gain control over the largest producer of coking coal in Ukraine04-03-2021, 19:26
Ukrainian business sees great opportunities in expanding China's openness -04-03-2021, 19:08
The fall in the price of nickel by more than 8% was the sharpest in 4 years04-03-2021, 18:25
At the Yaroslavsky metallurgical plant in the Dnieper began to pay for new04-03-2021, 14:39
Novokramatorsk Machine Building Plant strengthens its position in the national04-03-2021, 14:44
Spread between raw materials and high strength alloy steel in Europe increased01-03-2021, 20:21
Increase in prices is forecasted in the markets of steel raw materials -26-02-2021, 09:25
Troy ounce of gold will drop $ 500 in two years - Fitch25-02-2021, 18:29
Global iron ore production growth to outstrip cumulative production in India23-02-2021, 10:22
Fitch Ratings Warns of “Shocking Impact” on Fossil Fuel Exporters18-02-2021, 14:44
Sign in with: