In the first ten months of this year, the Chinese machinery industry has maintained strong growth. 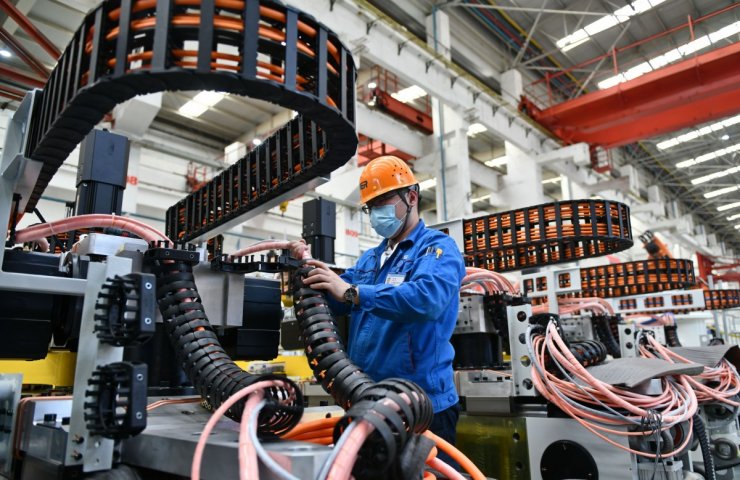 China's mechanical engineering sector has shown dynamic expansion in the first ten months of this year, which has recorded growth in terms of revenue, profit and added value compared to the same period last year, according to official data.

According to the Ministry of Industry and Informatization of the People's Republic of China, the combined operating revenues of companies engaged in this industry grew by 2.7 percent year on year to 17.81 trillion yuan (approximately $ 2.72 trillion).

During the specified time period, the total profit of these companies amounted to 1.12 trillion yuan, up 8.8 percent. The industry's value added grew 4.8 percent year over year.

Recommended:
Workers of uranium mining mines in Ukraine are preparing new protests
American steel producers have simultaneously raised prices for rebar by $ 50 at once
Gosgeonedra of Ukraine is moving to the world geodetic coordinate system WGS-84
On this topic
China expands car market capacity by increasing demand for steel and metals
Profits of the Chinese metals sector remain limited in October
China's steel sector can only rely on the real estate sector
The profitability of the Chinese industry declined by 4 percent
Profits of Chinese industrial companies grew by 13.9 percent in March
China's steel industry profit surges 40 percent
Add a comment
Сomments (0)
News Analytics
The price bubble in the US steel market has inflated to its maximum - the only27-01-2021, 10:00
Global steel production down 0.9% in 2020 - World Steel Association27-01-2021, 09:59
Interpipe fully repaid Eurobonds debt27-01-2021, 09:49
EVRAZ considers potential spin-off of coal business27-01-2021, 09:46
China to accelerate development of all-weather batteries for electric vehicles27-01-2021, 09:44
China will overtake the United States to become the world's largest economy in27-12-2020, 12:04
The shortage in the US steel market will last at least until the end of the25-12-2020, 11:36
Steel production in China to surpass one billion tons this year23-12-2020, 10:59
Iron ore prices hit seven-year high and continue to rise15-12-2020, 10:26
Prices for metallurgical raw materials continue to rise in regional markets10-12-2020, 11:32
Sign in with: