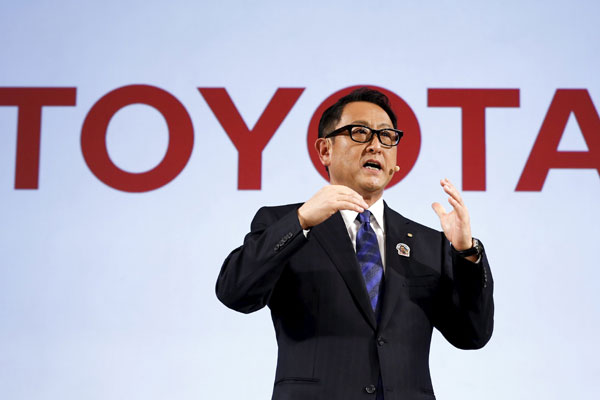 According to Toyoda, who is also the chairman of the automakers' association, Japan would be left without electricity in the summer if all cars in the country were electric.

“When politicians come out and say that we need to get rid of all gasoline-powered cars, do they understand what this is about?” he said.

Too hasty a ban on gasoline cars, he said, "will lead to the collapse of the current business model of automakers" and the loss of millions of jobs.

In a country like Japan, where most of the electricity comes from burning coal and gas, switching to electric vehicles will not help the environment, Toyoda said.

"The more electric vehicles we produce, the worse the carbon footprint gets," he said.

He also fears that cars may become inaccessible to the average citizen of the country.

Advocates of more EV use in Japan say cars can be charged at night when electricity demand is low. This market can grow gradually, along with the development of "green" technologies, they say.

In early December, Japanese media reported that the Japanese government plans to soon announce its intention to ban the sale of new gasoline-powered cars from 2035, while retaining the option to purchase hybrid vehicles.

However, so far there has been no official announcement. The Japanese Ministry of Economy, Trade and Industry says no decisions have been made on the future of diesel cars, The Wall Street Journal reports.

Toyota is the market leader in hybrid vehicles and does not sell electric vehicles to the mass market in the United States or Japan. The company is also releasing a hydrogen fuel cell car model.

Earlier this year, US electric vehicle maker Tesla surpassed Toyota in capitalization to become the world's most valuable automaker.

Recommended:
2021 will be the year of rapid development of private astronautics
Russian machine builders asked Vladimir Putin to influence metallurgists
Construction of Nord Stream 2 in Danish waters to begin on January 15 - DEA
On this topic
Korean auto makers will switch to hydrogen engines with help from Chinese steelmakers
For the first time in the history of Toyota bought Chinese steel for their cars
Toyota forecasts a drop in annual profit by 80%
Toyota invests $ 400 million in flying car company
Toyota Group opens car battery recycling plant in Thailand
Toyota Kirloskar Motor Prefers Indian Steel Makers
Add a comment
Сomments (0)
News Analytics
Industry association predicts 8% growth in passenger car sales in China in 202123-01-2021, 11:07
YUZHMASH expects the adoption of the new space program of Ukraine in the near22-01-2021, 15:18
Eleven miners still await rescue from exploded gold mine in China22-01-2021, 12:34
Rivne NPP shut down power unit No. 122-01-2021, 12:13
Russia will start producing "green" hydrogen22-01-2021, 10:47
China will overtake the United States to become the world's largest economy in27-12-2020, 12:04
The shortage in the US steel market will last at least until the end of the25-12-2020, 11:36
Steel production in China to surpass one billion tons this year23-12-2020, 10:59
Iron ore prices hit seven-year high and continue to rise15-12-2020, 10:26
Prices for metallurgical raw materials continue to rise in regional markets10-12-2020, 11:32
Sign in with: