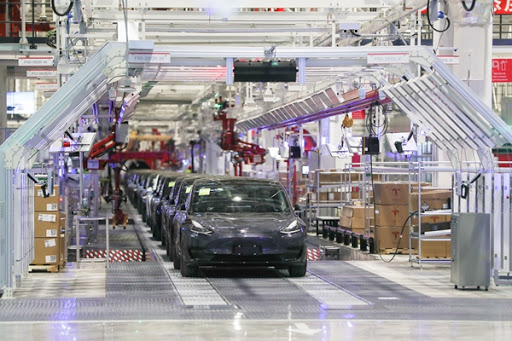 US auto maker Tesla Inc said Friday it has begun selling Chinese-made Model Y SUVs and will deliver them to customers this month as the US electric vehicle maker expands sales in the world's largest auto market.

China, which offers significant subsidies to electric vehicles in an effort to reduce pollution from gasoline or diesel vehicles, is a key element of Tesla's global strategy. The company is actively expanding its auto plant in Shanghai, where it also manufactures Model 3 sedans and exports them to Europe.

Tesla is also increasing its electric vehicle charger manufacturing capacity in Shanghai and expanding its sales and service network across the country.

Recall that at the end of 2020, the authoritative American magazine Consumer Reports put Tesla Model Y in the penultimate place in the ranking of American cars, talking about the poor quality of assembly and body painting, as well as the identified shortcomings in functionality.

Recommended:
Ukrzaliznytsia held successful auctions for the sale of scrap metal with an increase in the sale price of almost 50%
Eleven miners still await rescue from exploded gold mine in China
Production of industrial robots in China increased by 31.7% in November
On this topic
Tesla plans to export China-made Model 3s to Asia and Europe
Tesla lowers Model prices 3 China 10%, to obtain subsidies from Beijing
Tesla has reduced the prices of their Chinese cars after receiving grants from the government
The future of electric vehicles is being shaped in China
Tata Group Transfers India to Electric Vehicles
Chinese officials blame small steel mills for poor ecology
Add a comment
Сomments (0)
News Analytics
YUZHMASH expects the adoption of the new space program of Ukraine in the near22-01-2021, 15:18
Eleven miners still await rescue from exploded gold mine in China22-01-2021, 12:34
Rivne NPP shut down power unit No. 122-01-2021, 12:13
Russia will start producing "green" hydrogen22-01-2021, 10:47
High-speed railway launched in China Beijing-Harbin highway22-01-2021, 10:22
China will overtake the United States to become the world's largest economy in27-12-2020, 12:04
The shortage in the US steel market will last at least until the end of the25-12-2020, 11:36
Steel production in China to surpass one billion tons this year23-12-2020, 10:59
Iron ore prices hit seven-year high and continue to rise15-12-2020, 10:26
Prices for metallurgical raw materials continue to rise in regional markets10-12-2020, 11:32
Sign in with: