The production of industrial robots in China has a priority development according to the state program Made in China 2025 along with artificial intelligence and automation. 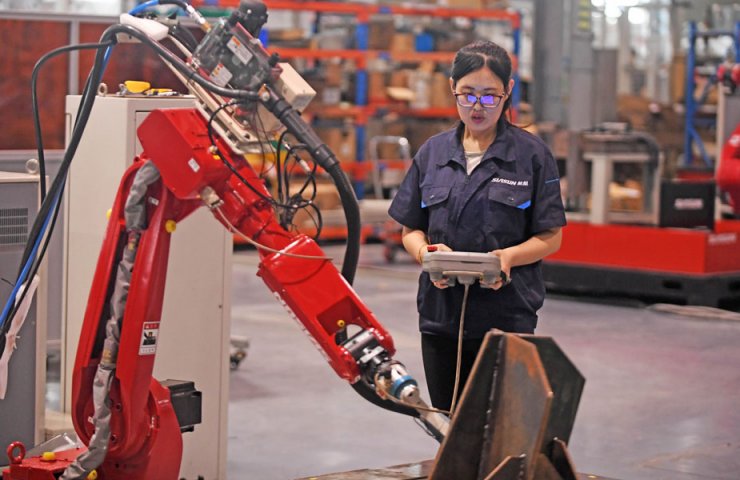 The volume of production of industrial robots in China in 2020 increased by 19.1% in annual terms, according to official data.

According to the Ministry of Industry and Informatization of the PRC (IIP), the growth in production volumes indicates an improvement in market demand and acceleration of intellectual modernization of enterprises.

According to statistics from the department, the operating income of large manufacturers of industrial robots in China over the past year increased by 6% compared to 2019.

Meanwhile, the robots for the service industry posted outstanding results: the operating income of large enterprises in the industry reached 10.31 billion yuan (about 1.6 billion USD), which is 31.3% more than in 2019 year.

China is committed to modernizing its labor-intensive manufacturing sector through technological innovation to meet the challenges of shrinking working-age population and rising labor costs.

Recommended:
UK denies financial aid to Liberty Steel
South Korea has come up with a technology that allows you to extract hydrogen from ammonia without emissions
British analysts have named the date of the upcoming fall in steel prices
On this topic
Production of industrial robots in China increased by 31.7% in November
Dneprotyazhmash in 2020 expects a fall in sales of mining and metallurgical products by
The market for industrial robots in China this year may grow by 5% after the recession in 2018
Platts: Strong growth in Chinese metallurgy will continue
China's steel sector can only rely on the real estate sector
China's steel industry profit surges 40 percent
Add a comment
Сomments (0)
News Analytics
Энергоатом заказал в Турбоатоме конденсатор стоимостью 0,5 миллиарда гривен для21-04-2021, 14:28
Укрзализныця достигла согласия с поставщиками по отгрузке дизельного топлива21-04-2021, 14:25
Global hydrogen demand to grow 7-fold by 2070 - PwC21-04-2021, 12:31
Energy independence of Ukraine depends on decarbonization and "green" energy -21-04-2021, 12:42
Shell tests hydrogen fuel cells on ships in Singapore21-04-2021, 11:39
Global hydrogen demand to grow 7-fold by 2070 - PwC21-04-2021, 12:31
World Steel Association predicts a good year for metallurgists15-04-2021, 18:19
World Steel Association defines green steel and its variations12-04-2021, 13:14
China unlikely to cut steel capacity in 2021 due to high steel prices07-04-2021, 12:11
Scrap metal market at the beginning of April02-04-2021, 11:10
Sign in with: