A global supply shortage of Taiwanese chips has affected the Japanese automotive industry. 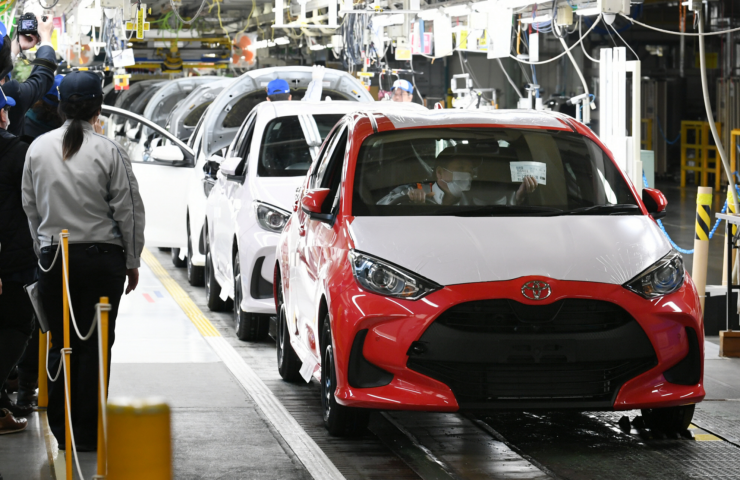 In January 2021, domestic car production in Japan declined further under pressure from production cuts by some car manufacturers due to a global shortage of semiconductor chips.

Domestic production of passenger cars by the country's top automakers fell 10% year on year to about 646,000 units in January. Some Japanese carmakers were forced to cut production in the domestic market within a month due to a shortage of semiconductors.

Subaru temporarily suspended production of cars in the domestic market in mid-January. Domestic production of Honda Motor vehicles declined in January from last year for the first time in five months, while Suzuki Motor reported the first drop in monthly vehicle production in two months.

Japan's largest car manufacturer Toyota Motor also said its domestic car production fell for the first time in five months from last year's level. The company previously stated that its production was not affected by the shortage of semiconductors.

Toyota resumed operations on all of its assembly lines in Japan today after being forced to temporarily close half of them in response to a shortage of auto parts caused by the February 13 earthquake that hit Japan's northeast coast.

Japan re-imposed a state of emergency in January to contain the spread of Covid-19, prompting fears of an economic slowdown. Sales of new passenger cars in the country increased 8% year on year to 208,279 units in January, according to the industry group of the Japan Automobile Dealers Association.

Recommended:
DTEK Energy plans to allocate UAH 2.3 billion for repairs of thermal power plants in 2021
Uralvagonzavod presented the first refrigerated car in Russia
Volkswagen will build cars that can be used as a backup source of electricity
On this topic
Chip shortage will reduce global car production by 670,000 units in the first quarter
General Motors suspends three factories in the US due to a shortage of computer chips
Trump's legacy - carmakers shut down factories over Chinese chip shortages
China expands car market capacity by increasing demand for steel and metals
Taiwanese chipmaker TSMC brings production in the United States
Toyota Group opens car battery recycling plant in Thailand
Add a comment
Сomments (0)
News Analytics
Gas prices in Ukraine have reached a record value over the past two years -16-04-2021, 17:24
Ukrmetallurgprom asks the Antimonopoly Committee to allow Metinvest to bid for16-04-2021, 17:23
A fatal accident occurred on the territory of the Dnieper Metallurgical Plant16-04-2021, 13:01
Cars built for Euro 2012 will be repaired at the Kryukov Carriage Works16-04-2021, 12:46
Novokramatorsk Machine-Building Plant has raised wages for the second time16-04-2021, 12:54
World Steel Association predicts a good year for metallurgists15-04-2021, 18:19
World Steel Association defines green steel and its variations12-04-2021, 13:14
China unlikely to cut steel capacity in 2021 due to high steel prices07-04-2021, 12:11
Scrap metal market at the beginning of April02-04-2021, 11:10
Rising Chinese Prices Fueled Rising Global Steel Prices - MEPS25-03-2021, 18:54
Sign in with: