The challenge for Posco engineers is to find a technological breakthrough in the development of lighter steel containers by using newly developed steel materials. 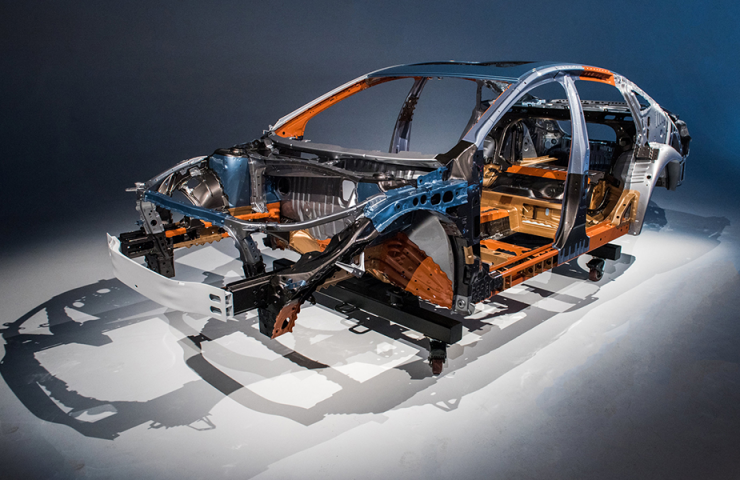 As cars move more and more from gasoline to electricity, carmakers are looking to replace steel with lighter materials such as carbon fiber-reinforced polymers and aluminum.

But South Korean steel giant Posco believes there is still hope for steel. It aims to retain auto maker customers by offering lighter, stronger steels. The strategy is being driven by a high-tech marketing solution developed by its R&D center in Songdo, Incheon.

Engineers at Posco R&D Global Center, said they are working with battery manufacturers, aftermarket and OEMs to test the use of steel in vehicle parts using computer simulations. The simulation process can also be used to optimize manufacturing processes and reduce manufacturing costs. Various designs are underway to keep the material attractive in terms of strength and cost.

Research projects are critical to Posco's automotive business. The South Korean steel giant provides roughly 10 percent of the world's automotive steel. Posco sold 9.1 million metric tons of steel for auto parts in 2017. Despite the growing popularity of aluminum, the steel mill plans to sell 12 million tonnes of automotive steel by 2025.

"It is generally accepted that the mass of vehicles will decrease in order to use (heavier) batteries to move further and improve their energy efficiency by replacing steel parts with aluminum," said Lee Hong-woo, principal investigator of the Research Group on creating materials from Posco Research and Development House.

“Once the use of aluminum becomes popular, it will be difficult (for automakers) to go back to steel. Before that happens, we must take proactive action by developing ways to make the most of giga steel in future vehicles. ”

GIGA steel is an ultra-high tensile steel - strong enough to withstand a pressure of 100 kilograms per square millimeter or 1 gigapascal. In addition to being stronger, it has better formability than other steels, which means that it can be turned into a wider range of specific shapes.

Aluminum has better formability and is lighter than steel, but the material is not as strong as steel, Li said, highlighting the importance of passenger safety.

“I think we have proven that the use of GIGA steel for electric vehicles is marketable. The one-year project satisfied the level of rigidity aimed at mass production of electric vehicles, ”Lee said, demonstrating a prototype suspension made from GIGA-grade steels. “We have presented a realistic result for customers looking for lighter yet stronger suspension parts. This also applies to conventional vehicles. ”

The challenge for Posco engineers is to find a technological breakthrough in the development of lighter steel containers by using newly developed steel materials.

The project was carried out in conjunction with battery manufacturers and automakers, although the company declined to name customers. Posco said it is open to new projects aimed at providing customized products to automakers around the world, which will curtail their research efforts to produce lighter yet more durable vehicles for the future.

Recommended:
The share of "green" energy in Ukrainian generation already exceeds the share of thermal power plants - Ministry of Energy
Dnipro Metallurgical Plant completed overhaul of the mixer
Ukrposhta bought 18 IVECO EuroCargo trucks worth about UAH 44.5 million
On this topic
Future mobility solutions will be based on steel
Samsung SDI and Volvo to jointly develop batteries for electric vehicles
Is the German auto industry preparing for a collapse?
China's steel sector can only rely on the real estate sector
Global auto industry plans to counter Trump's new Mexican tariffs
Global steel market for cars: forecast up to 2026
Add a comment
Сomments (0)
News Analytics
Demand for scrap metal in Ukraine exceeds supply by 5%19-06-2021, 11:45
Ukraine resumed sea purchases of gasoline due to restrictions on supplies from19-06-2021, 11:38
Installation of the first mine hoisting machine of Uralmashzavod began in Altai19-06-2021, 11:46
European designers have learned to inflate steel structures that could be a18-06-2021, 17:42
In Ukraine, police were accused of involvement in the theft of coal from trains18-06-2021, 17:51
Vaccinations fuel demand for platinum - World Platinum Investment Council08-06-2021, 12:55
Sharp price growth continues in the rolled metal market - Ukrpromvneshexpertiza08-06-2021, 11:04
Analysts note overheating of the global scrap metal market01-06-2021, 13:28
Hydrogen-fueled steelmaking could be competitive after 2050 - McKinsey19-05-2021, 14:22
Steel raw material prices are skyrocketing across the board18-05-2021, 12:34
Sign in with: