BELAZ-HOLDING increased product sales in the first quarter of 2021 by 45.5%

The most popular among miners in the first quarter of this year were 220-240-ton BELAZ dump trucks - 28% of the total shipment volume. 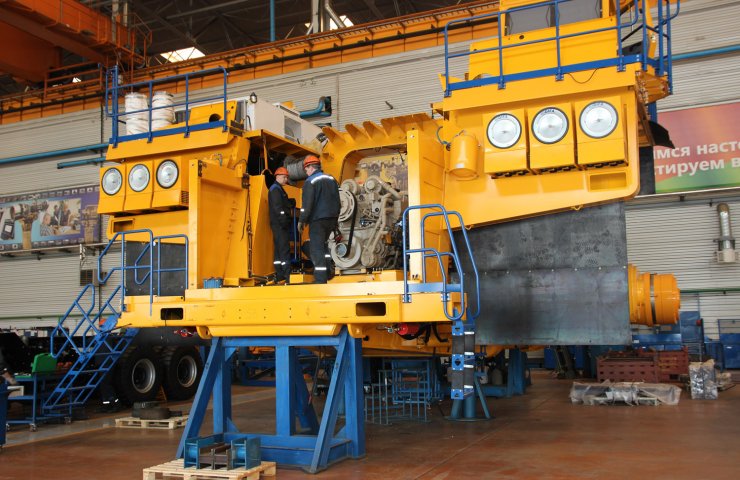 At the enterprises of the BELAZ-HOLDING holding in the first three months of 2021, there is an increase in production, sales and export of products.

In March, as in the previous months of the first quarter of 2021, there is a positive trend in terms of industrial production and foreign economic activity of OJSC BELAZ (Belarusian Automobile Plant together with branches). 169.2% was the growth rate of production (in current prices to the same period of 2020), and according to the IFO (actual volume index) - 149.6%. The Belarusian Automobile Plant delivered 93.4% of the total volume of manufactured equipment and spare parts to foreign markets (the export growth rate is 142% compared to the same period last year). At the same time, the share of the most capacious of the company's traditional markets - Russian - in the total March shipments amounted to 89.1% (growth rate - 308.1%).

Since the beginning of this year, individual enterprises of the holding have systematically increased the volume of manufactured products and actively shipped them.

The growth rate of production in current prices to the same period of 2020 at JSC Crane Plant amounted to 129.4%, JLLC BELTRIBO - 126.7%, branch of JSC BELAZ - SPK Pervomaysky - 146, 5%, PAK Plant OJSC - 100.9%. The largest increase (160.8%) since the beginning of the year has been demonstrated by the parent enterprise of the holding, the Belarusian Automobile Plant. Following a well-thought-out marketing strategy, BELAZ OJSC achieved good sales and export performance in the first quarter compared to the same period in 2020: the sales growth rate approached 153%, while outside the country it amounted to almost 168%.

A significant share of BELAZ and MoAZ vehicles were shipped to the Russian Federation. It should also be noted the supply of mining dump trucks and special equipment to Uzbekistan, Kazakhstan, Ukraine, Poland, Bosnia and Herzegovina, Belarus and other countries.

Recommended:
Fitch Changes Metinvest Rating Outlook From Negative To Stable
Zaporizhstal donated 370 tons of medical oxygen to hospitals in April
Liberty Steel made an official statement on the current financial situation in the company
On this topic
Russian Magnitka expects high profits and further rise in steel prices
Dneprotyazhmash in 2020 expects a fall in sales of mining and metallurgical products by
World steel production in November decreased by the percentage
The index of metallurgical production decreased by 7%
Failure rate: why import substitution failed to meet expectations
RUSAL is expected to increase global deficit of aluminium of up to one million tons
Add a comment
Сomments (0)
News Analytics
The European Union approved the use of mealworms06-05-2021, 14:40
The mining and metallurgical complex of Ukraine requires more than $ 10 billion06-05-2021, 13:57
Rinat Akhmetov's fortune during the pandemic grew 2.7 times from 2.8 to 7.606-05-2021, 10:21
DTEK Oil & Gas drills a new high-rate well using 3D modeling06-05-2021, 10:13
The growth of foreign exchange earnings from steel exports from Ukraine in four06-05-2021, 10:15
The current state of the market is ideal for the sale of rolled steel - IREPAS04-05-2021, 18:41
Global hydrogen demand to grow 7-fold by 2070 - PwC21-04-2021, 12:31
World Steel Association predicts a good year for metallurgists15-04-2021, 18:19
World Steel Association defines green steel and its variations12-04-2021, 13:14
China unlikely to cut steel capacity in 2021 due to high steel prices07-04-2021, 12:11
Sign in with: