ArcelorMittal plans to produce 1.6 million tonnes of carbon-free steel in Spain by 2025 at a green hydrogen price of € 1.50 /kg. 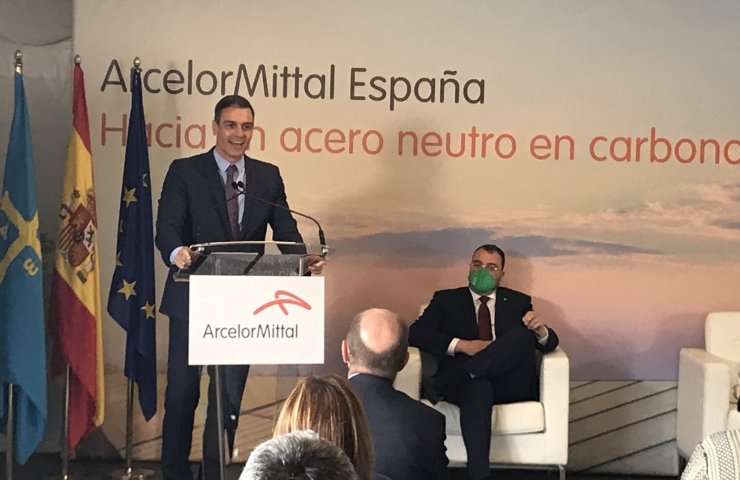 Europe's largest steel producer ArcelorMittal and the Spanish government signed a MoU to contribute a total of € 1bn ($ 1.18bn) to green steel projects in northern Spain, including a direct reduction iron (DRI) plant and a hybrid electric arc furnace in Gijón.

ArcelorMittal expects the government to cover about half of the costs.

The investment will enable the company to reduce carbon emissions from its Spanish operations by 4.8 million tonnes per year, or about 50%.

The steel company will build a direct reduced iron plant in Gijon with a capacity of 2.3 million tonnes per year, which will be operational by 2025. The company relies on the Hydeal consortium to supply green hydrogen to the plant.

Hydeal includes Italy's Snam, Spain's Enagas and Naturgy, Germany's Open Grid Europe and France's Gazel Energie, GRTgaz and Terega, and is backed by the European Investment Bank. The consortium aims to supply Europe with 3.6 million tonnes of green hydrogen per year at a price of € 1.50 /kg ($ 1.80 /kg) by 2030 through the construction of 95 GW of solar energy and 67 GW of electrolytic capacity.

The hydrogen price of € 1.50 /kg will allow the smelter to compete with other European steel mills.

ArcelorMittal is investing an additional € 50 million in initiatives such as using hydrogen instead of natural gas to heat rolling slabs. The company plans to produce 1.6 million tonnes of carbon-free steel in Spain by 2025.

Recommended:
Deutsche Bahn estimates flood damage in Germany at 1.3 billion euros
Metinvest is ready to pay more than 9 billion hryvnia for the Dnieper steel plant
Cherkassk Azot by Dmitry Firtash completed the modernization of the ammonia production plant
On this topic
Italy conducts the world's first industrial hydrogen testing in a metallurgical process
ArcelorMittal and 11 other companies including Shell and Airbus form a hydrogen consortium
Swedish state-owned mining company to switch to hydrogen for DRI production
Korean auto makers will switch to hydrogen engines with help from Chinese steelmakers
Thyssenkrupp to build hydrogen-fueled steel plant by 2025
Voestalpine commencement of commercial production of "green" hydrogen in Linz
Partner news
Сomments
Add a comment
Сomments (0)
News Analytics
Workers of Novokramatorsk Machine-Building Plant vaccinated with American27-07-2021, 15:01
Kharkov plant "Turboatom" can be renamed to "Ukrainian power machines"27-07-2021, 15:33
At least one person died and four went missing in an explosion at a chemical27-07-2021, 15:25
A powerful explosion thundered at the Bayer chemical plant in the German city27-07-2021, 12:56
Steel raw materials prices decline in all regional markets27-07-2021, 11:57
Steel raw materials prices decline in all regional markets27-07-2021, 11:57
On the regional markets of metallurgical products, prices are balancing in a22-07-2021, 16:22
Demand for armaments will ensure a stable growth of armored steel sales by 4%20-07-2021, 10:10
Protectionist Measures Support European Steel Prices Despite Summer Lull19-07-2021, 11:02
Positive price growth is observed in the markets for metallurgical products16-07-2021, 14:12