The world's first 3D-printed steel footbridge was installed in Amsterdam. The bridge, created by the Dutch company MX3D, was installed over the Audezijds Achterburgwal canal in the red light district. Queen Maxima of the Netherlands took part in the opening ceremony. 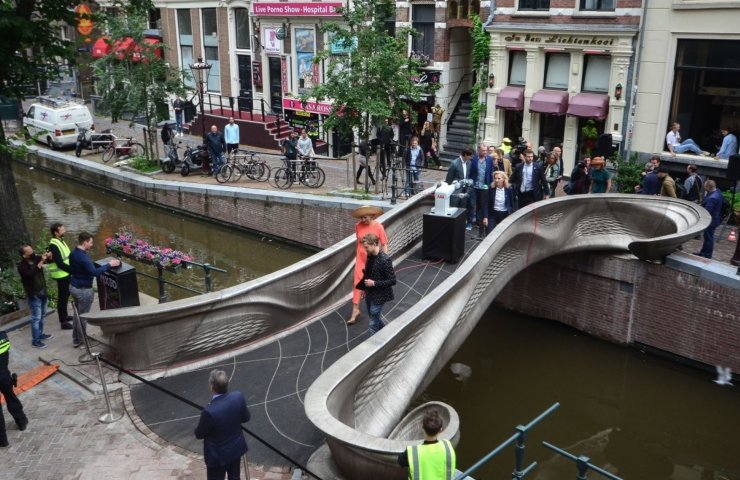 The world's first 3D-printed steel footbridge, 12 meters long, has opened in the red light district of Amsterdam, where it will serve as a "laboratory" for evaluating the behavior of metal printed structures during "live" operation.

The construction work required 4.5 tons of stainless steel to give the bridge an intricate curved design. The bridge was printed in four main pieces, as well as four "corner curls" which were then hand welded together.

The red light district is located in the historic center of Amsterdam and is called "De Wallen" in Dutch. You can easily walk there from the main square of the city. This is an area of ​​the city in which prostitution and other types of sex industry flourish, such as sex shops, strip clubs. The name comes from the red lights that stand in the windows of brothels.

The bridge was created by the Dutch company MX3D for more than four years and was installed over the Audezijds Achterburgwal canal. The bridge has a variety of sensors that process various structural parameters during pedestrian traffic.

The data collected from the sensors will enable experts to track changes in metal over its service life, such as whether steel flexes due to steps, and how much the number of pedestrians walking at the same time affects the structure.

“The 3D printed metal structure is large and strong enough to withstand pedestrian traffic has never been built before,” said Imperial project co-author Professor Leroy Gardner of the Department of Civil Engineering and the Environment.

The sensor data will also be placed in the bridge's "digital twin" - a computerized version that mimics the real physical version.

The physical bridge will be validated against its twin to help answer questions about the suitability of 3D printed steel and inform future construction projects.

Printing began in March 2017 and lasted for about six months. The finished bridge was exhibited at Dutch Design Week in October 2018. But due to the coronavirus pandemic, the installation of the bridge for public use has been postponed until today.

3D printing technology, invented in the 1980s by engineer and physicist Chuck Hull - also called additive manufacturing - is the process of making an object by applying material one layer at a time. Just like an inkjet printer adds individual dots of ink to form an image, a 3D printer adds material where needed based on a digital file. Today, 3D printers are used to manufacture everything from limb prostheses to space robots.