Explosion at a chemical plant in Germany: "There is no hope of finding the missing alive"

But due to possible emissions of toxic substances, the population of the city of Leverkusen is still recommended to refrain from eating fruits and vegetables from their own gardens and vegetable gardens, visiting playgrounds and swimming in pools, and before crossing the threshold of their own home, to shoot shoes. 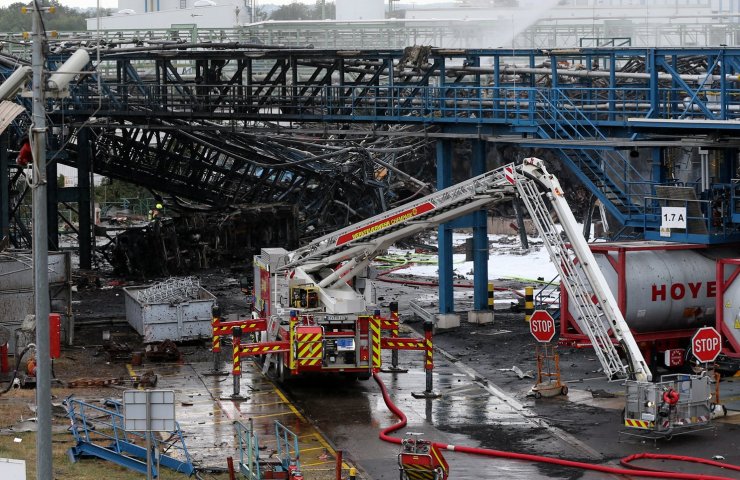 In Leverkusen, Germany, work continues to eliminate the consequences of an explosion at the Chempark chemical test site. They are attended by 360 employees of emergency services. The death toll from the accident rose to two. The number of injured is 31, one of them is in critical condition. The fate of five more people is still unknown.

“There is no more hope of finding them alive. We want to express our condolences to family and friends. We think about their families and loved ones, "said the head of Currenta, the operator of the chemical park, Frank Hildmar during a press conference on Wednesday.

The Cologne Criminal Police, together with an expert and Currenta employees, will begin an investigation into the causes of what happened on Thursday.

“It will take some time before the picture becomes clear,” said Leverkusen's fire chief Herman Greven.

A powerful explosion, which, according to eyewitnesses, was heard within a radius of several kilometers, occurred at 9.40 am local time. The blow was so strong that it was recorded even by the stations of the Geological Survey of North Rhine-Westphalia 40 km from the epicenter.

As a result of a fire, a tank with solvents burned for several hours. The second explosion - a tank with 100 thousand liters of flammable toxic waste was located nearby - was avoided.

To date, the toxic cloud of smoke has moved 40 km northeast of the city. Its composition is yet to be determined.

Recommended:
Energomashspetsstal shipped over a thousand tons of steel products for export in August
Elon Musk announced Tesla's readiness to create humanoid robots next year
Metinvest, in partnership with the Ministry of Culture, will create the first interactive laser-projection show in Ukraine in Khortitsa
On this topic
At least one person died and four went missing in an explosion at a chemical plant in Germany
A powerful explosion thundered at the Bayer chemical plant in the German city of Leverkusen
EU's largest economy will sharply accelerate GDP growth in coming months - DW
Akademik Chersky arrives at the Nord Stream 2 pipe-laying site
The Greek authorities decided to 2023 to completely abandon coal
Truck with 39 corpses found in British Essex, mass murder suspect arrested
Partner news
Сomments
Add a comment
Сomments (0)
News Analytics
Low-cost carrier Ryanair plans aggressive expansion in Ukraine16-09-2021, 21:34
Deutsche Bahn decided not to aggravate the situation with trade unions and will16-09-2021, 15:20
China to continue selling off its reserves to ease supply deficit16-09-2021, 15:44
Ten out of fifteen steel-making electric furnaces in Ukraine are idle -16-09-2021, 12:46
Australia will build its own nuclear submarines16-09-2021, 10:15
Moody's changes its outlook for the mining and metals industry from "positive"14-09-2021, 18:39
European steel prices decline from summer highs and remain stable high04-09-2021, 10:38
Rise in European steel prices to dizzying levels finally fizzled out - Bloomberg27-08-2021, 13:18
Gold continues to be the most efficient portfolio asset - WGC26-08-2021, 12:38
Falling iron ore prices caught Wall Street by surprise - WSJ23-08-2021, 13:57
Sign in with: