An economic boom begins in Germany. It will be provided by 7 growth drivers, including industrial production will play a key role in the recovery of the German economy. 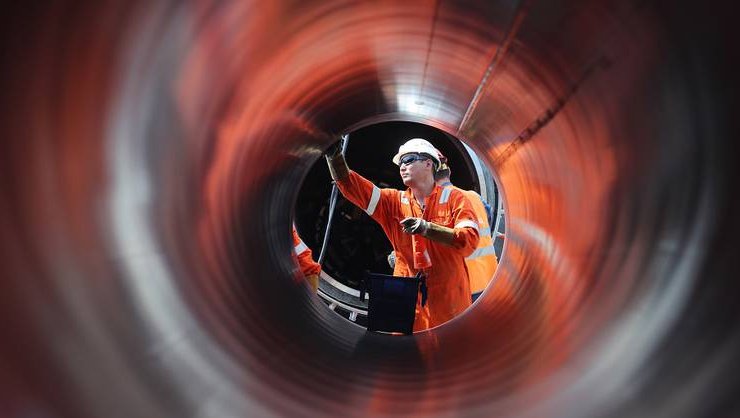 The exit of the German economy from the protracted crisis in the near future will sharply accelerate and the rapid growth of GDP in 2021 will be facilitated by at least 7 growth drivers, writes the German edition of Deutsche Welle ... At the same time, Russia can receive a significant income from the economic boom in Germany, which will receive the prospect not only to increase energy supplies to Germany, but also a high demand on the German market for a variety of Russian raw materials from metals to wood.

The manufacturing industry will again become the main driver of growth in the German economy, as it was last year. In Germany, its contribution to the formation of GDP is much higher than, for example, in the USA, in France, and even more so in Great Britain. In this regard, the German economy is more similar in structure to the Asian economy - Japanese and South Korean.

"Germany is one of the few large, highly developed national economies that still have a strong industrial base," says Deutsche Bank Analytical Center (DB Research) in a recent study on the potential of the German economy.

The second growth factor will be an increase in German exports, and primarily to China, where the economy is recovering extremely quickly after the pandemic. It is precisely the closely interconnected industrial production and export that will become the two main drivers of growth of the German economy this year, German analysts say.

The third engine of the economy will be the construction boom that has been going on in Germany for six years now. Even a pandemic could not stop it: if industrial production and exports fell in 2020, then the construction industry increased revenue by 6.6% to a record 98.3 billion euros in the country's history, Destatis calculated in February after polling about 9,100 construction companies from 20 and more employees.

The undoubted driver of growth in business activity, especially in the service sector, will be the massive vaccination of the German population against coronavirus. In the first quarter, it stalled due to a shortage of vaccines, now their supplies are increasing every week, and as of May 10, 32.8% of all German residents have received at least one dose.

The phased lifting of restrictions is likely to lead to a consumer boom: the Germans yearned for their usual way of life with shopping, sitting in cafes, going out to restaurants and traveling on vacation.

Along with the expected consumer boom, another driver of Germany's GDP growth will be a very likely boom in domestic tourism, because the experience of 2020 showed that many Germans will certainly want to go somewhere on vacation, but due to fears of contracting coronavirus and an incomprehensible situation with the opening of the borders will prefer to relax inside the country.

The seventh driver of GDP growth may become 25.6 billion euros, which are relied on by Germany from the fund for the recovery of the EU countries after a pandemic in the amount of 750 billion euros, the decision on the creation of which is now in the EU in the stage of ratification. The German government has decided to invest these funds, which will flow over several years, in green technologies and digitalization, in particular, in the development of a hydrogen economy, modernization of the railway, the installation of charging stations for electric vehicles and the purchase of buses with environmentally friendly engines for public transport.

Recommended:
Russia plans to double the export duty on scrap metal to 90 euros per ton
Uzbekistan and Tajikistan to create a joint investment fund in the amount of US $ 50 million
Dneprovsk Iron and Steel Works increased the production of iron and steel, but reduced the production of rolled metal
On this topic
Onshore section of Nord Stream 2 launched in Germany - Deutsche Welle
German environmental organization Deutsche Umwelthilfe filed new lawsuit against Nord Stream 2
Siemens Energy promised Deutsche Welle to closely monitor democracy in Belarus
Electric vehicle production in Germany is growing at astronomical numbers - DW
Akademik Chersky arrives at the Nord Stream 2 pipe-laying site
Is the German auto industry preparing for a collapse?
Add a comment
Сomments (0)
News Analytics
Energoatom approved Electrotyazhmash as a supplier of turbine generators for16-06-2021, 14:57
Representatives of Ukraine and Germany discussed the prospects for cooperation16-06-2021, 10:49
Vestas and DTEK RES signed an agreement for the supply of wind turbines for the16-06-2021, 10:45
SSAB agrees with Volvo to supply and refine HYBRIT decarbonized steel16-06-2021, 10:40
Energomashspetsstal manufactured blanks for reactor equipment parts for16-06-2021, 09:38
Vaccinations fuel demand for platinum - World Platinum Investment Council08-06-2021, 12:55
Sharp price growth continues in the rolled metal market - Ukrpromvneshexpertiza08-06-2021, 11:04
Analysts note overheating of the global scrap metal market01-06-2021, 13:28
Hydrogen-fueled steelmaking could be competitive after 2050 - McKinsey19-05-2021, 14:22
Steel raw material prices are skyrocketing across the board18-05-2021, 12:34
Sign in with: