Work on the pipeline that connects Russia to Germany was halted almost a year ago after the US threatened to impose sanctions, but is expected to resume this weekend. 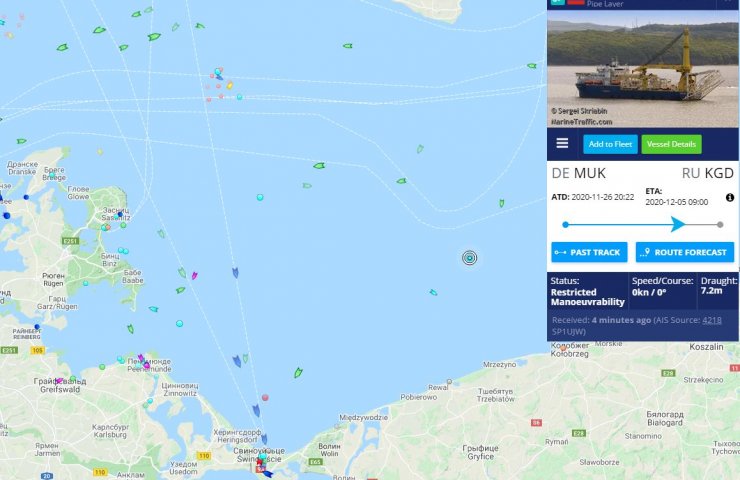 The Russian pipe-laying vessel Akademik Chersky has approached the proposed point of continuing the construction of the Nord Stream-2 gas pipeline. This follows from the data from the vessel tracking portal MarineTraffic .

The vessel is in limited maneuverability status. In addition, the specialized barge Fortuna, intended for laying pipes, left the German port of Wismar in the Baltic Sea.

Also, according to MarineTraffic, the ship "Umka", which is used in construction to deliver pipes from the shore, as well as the multi-purpose ship "Finval" are located in the German port of Mukran.

That the operator of the construction of the Nord Stream 2 (SP-2) gas pipeline, Nord Stream 2 AG, may begin laying the remaining section of the pipeline on December 5, 2020 and complete work in the exclusive economic zone of Germany by the end of the year, became known on Sunday, November 29th.

Earlier, the Federal Maritime and Hydrographic Agency of Germany reported that the laying of a pipe for the Nord Stream 2 gas pipeline in German waters will be carried out by a specialized barge "Fortuna" flying the Russian flag. The ministry's document states that the vessel will conduct subsea operations on the pipeline from 5 to 31 December. Prior to that, the agency's representative assumed that the ship “Akademik Chersky” would be building the German section.

At the end of November, the German maritime agency issued a notice to sailors that subsea pipe-laying on two parallel pipelines would begin on the Nord Stream 2 section. In turn, the project company Nord Stream 2 confirmed to RBC that it is about the resumption of the construction of Nord Stream 2, while in the waters of Germany.

On November 30, the press service of the SP-2 completion operator reported that Gazprom and its European partners provided almost 100% financing for the construction of the Nord Stream 2 gas pipeline, and the project was provided with funds for putting the pipeline into operation. On the same day, the Anglo-Dutch company Shell and the Austrian company OMV announced the completion of funding for the project.

The pipeline has been completed by more than 90%. The implementation of the project is hampered by the US sanctions, which were introduced in December 2019.

According to analysts, Russian Gazprom will take at least two months to lay the remaining 160 km of the Nord Stream 2 gas pipeline, mostly in Danish waters. In July of this year, Denmark agreed, at the request of the operator Nord Stream 2, to use vessels in the area that are not equipped with a dynamic positioning system (DP).

The United States called on Germany and the European Union to impose a "moratorium" on the completion of the Nord Stream 2 gas pipeline, the "political instrument of the Kremlin," the US Ambassador to Berlin said today.

“The time has come for Germany and the EU to impose a moratorium on the construction of the pipeline,” said Robin Quinville in an interview with the German financial newspaper Handelsblatt. "This pipeline is not only an economic plan, but also a political tool for the Kremlin to bypass Ukraine and divide Europe," the US ambassador warned.

According to the expert of the Institute for Strategic Studies Yuriy Korolchuk, the Ukrainian economy will lose several billion dollars a year after the start of the operation of the Nord Stream-2 gas pipeline. He stressed that the project can be completed in the second quarter of next year, after which gas will be pumped through its pipes. In this regard, the transit of blue fuel through Ukraine will no longer be needed.