In Germany, they began to produce aviation fuel by electrolysis of water with further synthesis of hydrogen and biogas into methanol. Thus, the world's first industrial production of synthetic aviation fuel was launched. The customer is Lufthansa. Germany intends to widely export new green technology. 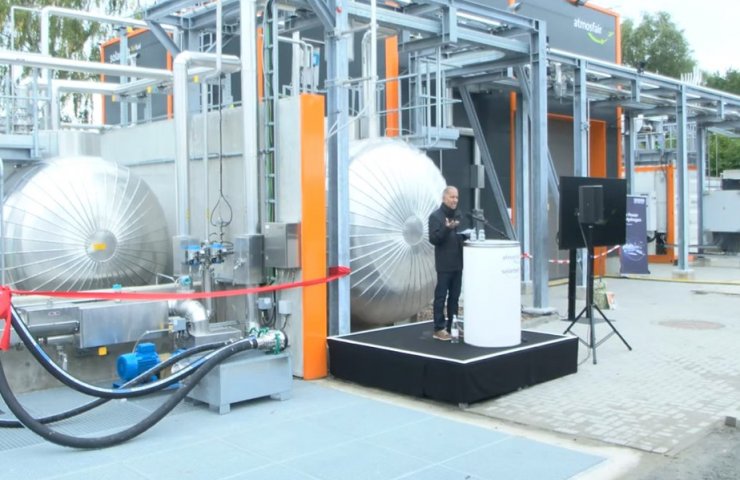 On October 4, the world's first installation for the production of synthetic aviation fuel on an industrial scale was launched in the town of Wehrle in northwestern Germany. Ecological fuel for aircraft is produced by water electrolysis. The hydrogen released in this process combines with CO2 from the production of biogas. The electrolysis process takes place at the expense of renewable energy sources (RES).

After reaching its design capacity in early 2022, the unit, created by Siemens Energy, will be able to produce one ton of synthetic fuel per day. Lufthansa will be the first buyer of green fuel, which will refuel its cargo planes at Hamburg airport. The airline has committed to purchase at least 25,000 liters of synthetic kerosene annually over the next five years.

With such volumes, the new enterprise, of course, will not compete with oil refineries - traditional partners of air carriers. But such a task is not worth it. The goal is to show that the technology for producing climate-neutral aviation fuel really exists and its production can be increased, while reducing the still very high cost.

“To achieve our goal of reaching an annual production of 200,000 tons of green aviation fuel by 2030, production capacity will have to be significantly expanded,” Angela Merkel emphasized in her video message to the participants in the ceremonial launch of the facility in Verla. Noting the “pioneering spirit and enthusiasm” of the project initiators, the German Chancellor expressed confidence that “the technology and the market continue to develop.”

In Germany, for a decade and a half, they have been developing and testing at numerous experimental facilities technologies for using renewable energy sources, mainly wind, to obtain from ordinary water by electrolysis or hydrogen, and then methane, or synthetic liquid fuel, for example, aviation kerosene.

Back in 2013, it was in Verl that the world's first large pilot plant was launched to produce "green" hydrogen (H2), which was converted into methane during a chemical reaction with carbon dioxide (CO2). It was then pumped into a gas network that supplied natural gas to adjacent settlements.

3 and this project was the German automaker Audi, which then experimented with natural gas fuel and released the Audi A3 g-tron. Therefore, generating stations appeared in Verl. However, then Audi, together with its parent concern Volkswagen, came to the conclusion that the production of gas-powered cars was an unpromising direction, and completely switched to electric vehicles, closing the project.

The German government has ordered airlines that from 2026 the share of synthetic kerosene in aviation fuel should be at least 0.5%. This is approximately 50,000 tons, which is more than a hundred times the capacity of the Verl plant. Therefore, investors have an incentive to expand production, because they are practically guaranteed sales of products. From 2030 this mandatory share will increase to 2%.

However, the use of synthetic kerosene is far from the only way to decarbonize air traffic. For example, German Lufthansa back in 2011 was the first in the world to start mixing biofuels with conventional kerosene on medium-haul routes, and in the spring of this year, the French airline Air France made the first transcontinental flight with a 16% admixture of SAF (Sustainable Aviation Fuel) ecological aviation fuel.

In addition, in the French city of Toulouse, where the headquarters and main plant of the European aircraft manufacturer Airbus are located, experiments have been carried out with the Airbus A350 running on 100 percent biofuel since March 2021. However, the same Airbus is also working on the creation of hydrogen aircraft.