CEO of Rio Tinto has apologized to the aborigines for the destruction of their sacred caves in Western Australia and agreed to cooperate with the investigation. 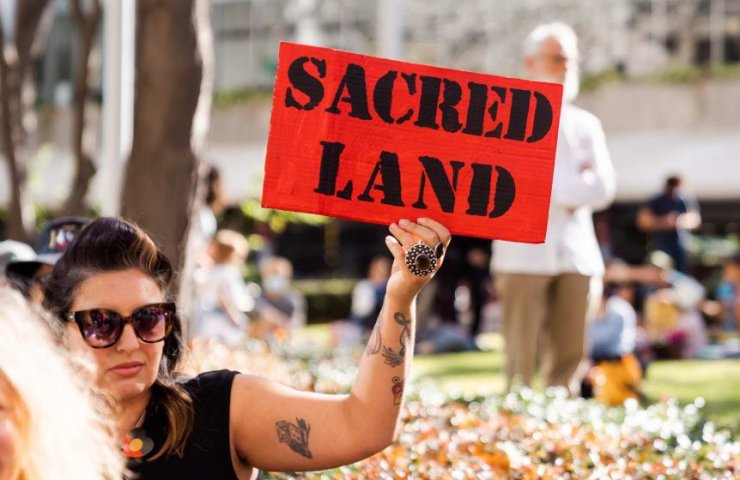 the Australian Senate on Thursday decided to launch a national investigation into the intentional destruction of cultural and historically significant places. Under the terms of the inquiry, the joint standing Committee on Northern Australia is due to report its findings until September 30.

on Friday, the CEO of Rio Tinto Jean-Sebastien Jacques apologized for the destruction of the two ancient and sacred caves of the aborigines in Western Australia, caused by the direction of the explosion last month, announcing their full cooperation with the request of the Australian government.

Previously reported that with the approval of the government of the state of the world's largest mining company iron ore destroyed two caves in the gorge Juukan where previously found evidence of continuous human habitation, has 46 000 years, as part of the expansion of the mine Brockman in a rich iron region of the Pilbara.

In Australia, mining companies must apply for approval on land use with groups of "traditional owners", that is, with indigenous aboriginal communities. In the case if users come to the conclusion that the impact on the heritage site is "imminent", they must obtain the consent of the Minister of state for the indigenous population to act in accordance with article 18 of the Law on the aboriginal heritage.

the Minister also receives advice from the body which represents the interests of the heritage of indigenous peoples within the decision-making process. But traditional owners cannot appeal the decision of the Minister.

This act was revised for two years, and the timing of the reforms was postponed in April 2020 due to limitations on the coronavirus.

Australian aborigines refused from reconciliation with Rio Tinto after it blew up two ancient sacred caves in the framework of expanding its iron ore mines.

"the Explosive activity in the gorge Juukan conducted by Rio Tinto, strips of torn relations with the peoples of puutu Kunti Kurama and Pintura (PKKP) and the ultimate violation of respect", - stated in the coalition of Australian aborigines.

"In Australia, there are only a few known places of residence of natives that are as old as this," said Chairman of the Land Committee Puutu Kunti of Kurrama John Ashburton, calling this part one of the oldest in the country. "Our people are deeply concerned and saddened by the destruction of these stone shelters and mourning the loss of connection with our ancestors and our land."

Recommended:
The Minister of Energy of Ukraine promised today to close the issue of wage debt to miners
Cracks in metal cause high-speed rail to stop in UK
The mining and metallurgical complex of Ukraine requires more than $ 10 billion in environmental investments
On this topic
The natives refused to accept Rio Tinto after the blasting of their sacred caves in the Pilbara
Rio Tinto destroyed the sacred caves of the aborigines in Western Australia
The price bubble in the ore market will soon deflate quickly
Namibia agrees to sell uranium stake in Rio to China
Rio Tinto Capitalization Reaches Record Level Amid Rising Ore Prices
Rio Tinto says Amrun bauxite mine is fully operational
Add a comment
Сomments (0)
News Analytics
Volodymyr Zelenskyy signed a law to extend the export duty on ferrous scrap16-05-2021, 09:29
China's Tianwen 1 spacecraft successfully landed on Mars15-05-2021, 12:56
British law enforcement officials accused Liberty Steel and GFG Alliance of15-05-2021, 12:03
Chip shortage will cost the global auto industry $ 110 billion in revenue in14-05-2021, 12:15
Zaporizhzhya Dneprospetsstal expands international partnership14-05-2021, 11:17
The current state of the market is ideal for the sale of rolled steel - IREPAS04-05-2021, 18:41
Global hydrogen demand to grow 7-fold by 2070 - PwC21-04-2021, 12:31
World Steel Association predicts a good year for metallurgists15-04-2021, 18:19
World Steel Association defines green steel and its variations12-04-2021, 13:14
China unlikely to cut steel capacity in 2021 due to high steel prices07-04-2021, 12:11
Sign in with: