5,000 employees of the SE "VostGOK", which is engaged in the extraction of uranium ore, received not only payments with salary debts, but also the opportunity to return to their jobs. 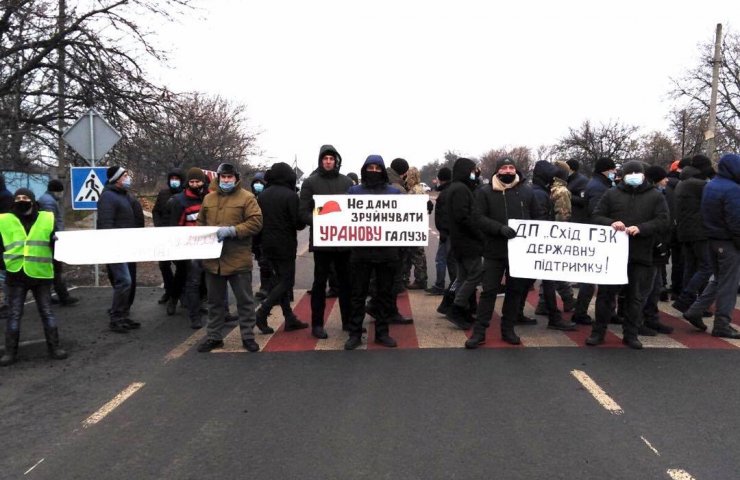 All three mines of the state enterprise "VostGOK" on Tuesday January 12 return to work after more than a month of forced downtime. The resumption of the work of the enterprise's divisions, the way out of the idle mode and the material and technical support of production were discussed today at the conference call, which was chaired by V. Pukhalskiy, chief engineer of SE "VostGOK".

The heads of the mines informed about the preparatory work to exit the idle time on January 12. V.Pukhalskiy focused the attention of managers on compliance with safety rules and regulations when starting production in accordance with clause 29 of the Safety Rules for the development of ore and nonmetallic useful mines by underground method.

The company also promises to provide materials and restore the work of the uranium hydrometallurgical plant by the end of the week.

Recall that on December 7, the uranium mines of the SE "VostGOK" were removed to idle due to lack of funding for the purchase of the necessary materials. The miners, to whom the enterprise, among other things, owed wages, organized several protests, during which the highways of national importance were blocked.

The State Enterprise "Vostochny Mining and Processing Plant" (SE "VostGOK") was established in 1951 and remains the only enterprise in Ukraine that ensures the extraction of natural uranium and the production of its oxide concentrate. Vostochny Ore Mining and Processing Plant is one of 28 uranium mining centers in the world, among which it is in the top ten, and is also the largest in Europe.

Recommended:
Rolls-Royce buys metal products from Liberty Steel on a prepaid basis and with a large stock
List of companies subject to sanctions in Ukraine published
State Energy Efficiency of Ukraine and the German Energy Agency signed a Memorandum of Cooperation
On this topic
SE "VostGOK" will not return to operation uranium mines from January 4, 2021
Energoatom accused VostGOK of short supply of uranium concentrate for 700 million hryvnia
Uranium problems: Ukraine may lose its own production
Eastern GOK reduced production of uranium concentrate by 30%
Subdivisions of SE "VostGOK " resumed work after forced temporary downtime
"VostGOK and Energoatom signed a six-year contract for the supply of uranium concentrate
Add a comment
Сomments (0)
News Analytics
The capacity of the domestic steel market in Ukraine in January-March decreased19-04-2021, 10:33
In Russia, there is an exuberant demand for agricultural machinery19-04-2021, 10:24
Iran is satisfied with the reaction of the world community to 60% enrichment of18-04-2021, 13:24
Gas prices in Ukraine have reached a record value over the past two years -16-04-2021, 17:24
Ukrmetallurgprom asks the Antimonopoly Committee to allow Metinvest to bid for16-04-2021, 17:23
World Steel Association predicts a good year for metallurgists15-04-2021, 18:19
World Steel Association defines green steel and its variations12-04-2021, 13:14
China unlikely to cut steel capacity in 2021 due to high steel prices07-04-2021, 12:11
Scrap metal market at the beginning of April02-04-2021, 11:10
Rising Chinese Prices Fueled Rising Global Steel Prices - MEPS25-03-2021, 18:54
Sign in with: