Earlier, after several days of blocking state highways, VostGOK workers were promised to pay wage arrears and resume the work of uranium mines from January 4. 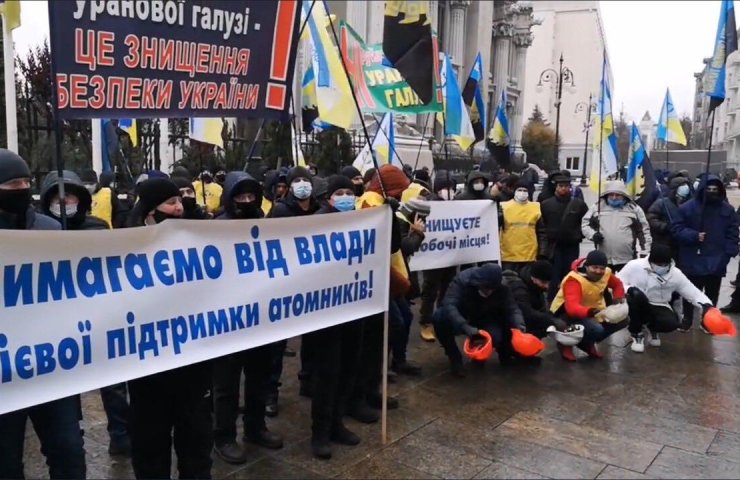 The labor collectives of the uranium mining mines of the SE "VostGOK" held a meeting today and decided to start a large-scale protest in the Kirovograd region and in Kiev on January 11 in case their enterprise is not taken out of the idle mode, said the chairman of the Independent Trade Union of Miners of Ukraine M. Volynets.

Earlier, the administration of the only uranium mining enterprise in Ukraine stated that it is unable to resume the work of the mines that were shut down in early December last year due to lack of funding for the procurement of materials, funds and reagents in sufficient volume to safely restore work on time.

“It is possible to launch mines into production not earlier than 3-5 days after the necessary funds are received at VostGOK,” the administration said, asking the workers to be patient a little longer and not to rebel.

Employees are ready to wait until January 6, when the funds promised by Kiev to restore the work of the state enterprise should be received at the enterprise's account, says M. Volynets. However, if there is no money, part of the labor collective will resume an indefinite protest action on highways of national importance already next Monday.

“Traffic will be blocked in the directions from Kropyvnytskyi to Kiev, Nikolaev, Krivoy Rog, Alexandria. A delegation of miners - uranians in Ingulskaya, Smolinsky, Novokonstantinovskaya will come to picket the buildings of the President's Office and the Ministry of Energy, ”the trade union warns.

Recommended:
A rock collapse occurred at the Pervomaiskugol mine - one worker remains under the rubble
Russian automotive market shrank 9.1% in 2020
An explosion thundered in the north of China, there are victims
On this topic
SE "VostGOK" will not return to operation uranium mines from January 4, 2021
The protest action of the workers of the VostGOK uranium mining mines will continue around the clock
Workers of uranium mines in Ukraine threaten to block four routes on Monday
VostGOK workers blocked three highways protesting against non-payment of wages
Uranium problems: Ukraine may lose its own production
In Luhansk region the miners refused to come to the surface
Add a comment
Сomments (0)
News Analytics
Interpipe Steel: green metallurgy in Ukraine turns 9 years old18-01-2021, 15:28
Ukrmetallurgprom clarifies data on iron and steel smelting in Ukraine for 202018-01-2021, 12:50
At least 12 living miners remain under the rubble of a mine blown up on January18-01-2021, 11:47
In the Republic of Tuva, a citizen of China died as a result of a collapse in a17-01-2021, 11:44
Lenovo remains the global leader in personal computer shipments in 202017-01-2021, 08:19
China will overtake the United States to become the world's largest economy in27-12-2020, 12:04
The shortage in the US steel market will last at least until the end of the25-12-2020, 11:36
Steel production in China to surpass one billion tons this year23-12-2020, 10:59
Iron ore prices hit seven-year high and continue to rise15-12-2020, 10:26
Prices for metallurgical raw materials continue to rise in regional markets10-12-2020, 11:32
Sign in with: