SE "VostGOK" will not return to operation uranium mines from January 4, 2021

The administration of the SE "VostGOK" appealed to the collective of the plant, trade union leaders, activists, informal leaders with a request not to use radical actions to block national highways in connection with the violation of the terms of the resumption of work of mining complexes of mines. 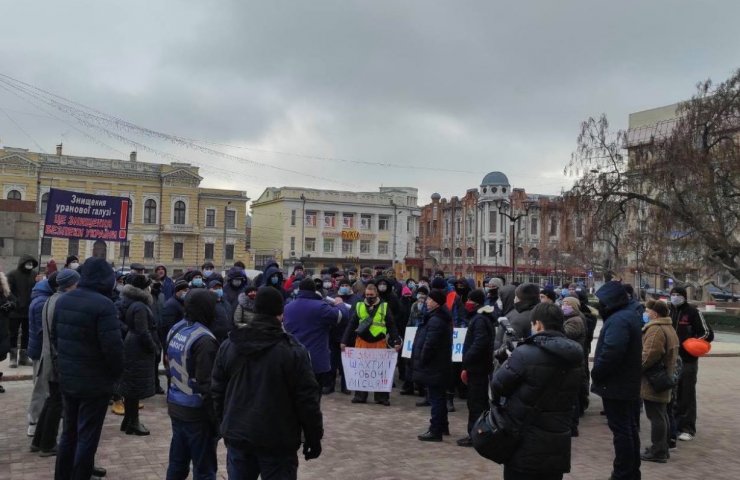 No funds were received for the VostGOK plant to resume the production of uranium mines that were shut down on December 7, which caused the delay in launching the mining complex of mines from January 4, 2021. This was reported in the press service the only uranium mining enterprise in Ukraine on Wednesday evening.

“Today the mines are not provided with materials, means and reagents in sufficient volume for the safe restoration of work on time. Considering the above circumstances, there is no way to restore the operation of the mines from January 4, 2021 and ensure their safe operation. It is possible to launch the mines into production not earlier than 3-5 days after the receipt of the necessary funds at VostGOK, "the message says.

On December 30, a bilateral meeting of the management of SE "VostGOK" and SE "NAEK" Energoatom "took place. A constructive dialogue took place on further cooperation and the search for ways to get the plant out of the difficult financial and economic situation. The management of NAEK and VostGOK are ready to actively participate in the development of a roadmap for the soonest entry of the plant into the company. The parties discussed key issues and decided on further steps that will determine a set of measures to combine enterprises.

The administration of the SE "VostGOK" urged all employees of the enterprise, heads of trade union organizations operating at the plant, local leaders not to take radical actions, and together with the management of the plant create conditions for solving financial issues and speeding up the productive work of the plant as part of a constructive dialogue on CEO level with all stakeholders involved.

Recommended:
Zaporizhstal in 2020 allocated more than 26 million hryvnia to protect employees from COVID-19
Smart Holding and Dragon Capital agree to sell Unex Bank
Metinvest allocated $ 67.4 million to modernize Ingulets GOK
On this topic
Energoatom accused VostGOK of short supply of uranium concentrate for 700 million hryvnia
Workers of uranium mines in Ukraine threaten to block four routes on Monday
Uranium problems: Ukraine may lose its own production
Workers of the only uranium mining enterprise in Ukraine protest
Pavlisin: Energoatom may face a shortage of funds for payment of taxes and salaries
Minister Ariel presented to the staff of SE NNEGC "Energoatom" the new head
Add a comment
Сomments (0)
News Analytics
YUZHMASH expects the adoption of the new space program of Ukraine in the near22-01-2021, 15:18
Eleven miners still await rescue from exploded gold mine in China22-01-2021, 12:34
Rivne NPP shut down power unit No. 122-01-2021, 12:13
Russia will start producing "green" hydrogen22-01-2021, 10:47
High-speed railway launched in China Beijing-Harbin highway22-01-2021, 10:22
China will overtake the United States to become the world's largest economy in27-12-2020, 12:04
The shortage in the US steel market will last at least until the end of the25-12-2020, 11:36
Steel production in China to surpass one billion tons this year23-12-2020, 10:59
Iron ore prices hit seven-year high and continue to rise15-12-2020, 10:26
Prices for metallurgical raw materials continue to rise in regional markets10-12-2020, 11:32
Sign in with: