10 miners recovered from exploded gold mine in China

In total, at the time of the explosion, which occurred on January 10, there were 22 people underground in the mine, 11 of whom were brought to the surface after two weeks of excavation. 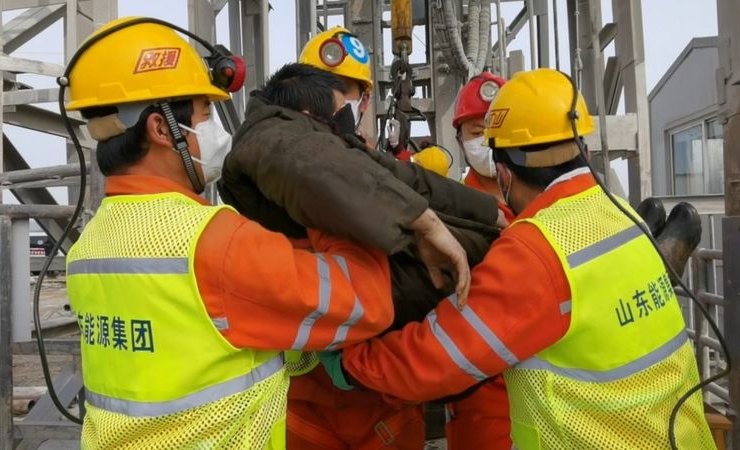 Rescuers lifted the bodies of 10 miners to the surface, trapped under the rubble in an explosion at a gold mine in Shandong province in eastern China.

On January 10, an explosion occurred at one of the gold mines in the city of Qixia, which is administratively subordinate to the city of Yantai, as a result of which 22 miners were trapped underground. On Sunday, the surviving 11 miners were rescued after being trapped in a trap for two weeks after the incident. One miner is still missing, according to a press briefing on Monday.

"We will not stop searching for the missing miner, " said Mayor of Yantai City Chen Fei, adding that the rescue work is extremely difficult, as the groundwater is very deep.

According to him, the 11 rescued miners are receiving proper medical attention, and DNA tests are being carried out to confirm the identities of the victims.

Currently, the investigation into the causes of the accident is ongoing

Recommended:
Interpipe and DTEK signed agreements with the UAE State Investment Fund
Chinese bicycle production up 24.3% in 2020
Chinese Mars probe "Tianwen 1" completes fourth orbital correction
On this topic
11 miners rescued from exploding gold mine in China on January 10
At least 12 living miners remain under the rubble of a mine blown up on January 10 in China
An explosion thundered in the north of China, there are victims
An explosion occurred at the ArcelorMittal mine in Kazakhstan - one of the workers remains under
18 people die after carbon monoxide leak in China coal mine
Relentless degradation of the coal industry. Close Ukrainian mines?
Add a comment
Сomments (0)
News Analytics
Georgia's economy shrinks by 11.5% in January26-02-2021, 21:21
Ukraine retained its position in the world ranking of steel producers and rose26-02-2021, 15:52
ArcelorMittal has raised prices for galvanizing for the European market to 90026-02-2021, 13:23
The European Commission initiated a new investigation on steel imports to26-02-2021, 13:22
A rally of workers of the stopped shipyard was held in Mariupol26-02-2021, 12:34
Increase in prices is forecasted in the markets of steel raw materials -26-02-2021, 09:25
Troy ounce of gold will drop $ 500 in two years - Fitch25-02-2021, 18:29
Global iron ore production growth to outstrip cumulative production in India23-02-2021, 10:22
Fitch Ratings Warns of “Shocking Impact” on Fossil Fuel Exporters18-02-2021, 14:44
Raw material prices rise by about 10.5% in January 2021 - Deutsche Industriebank12-02-2021, 10:48
Sign in with: