Rescuers have contacted workers trapped under the rubble following an explosion at a mine in eastern China. 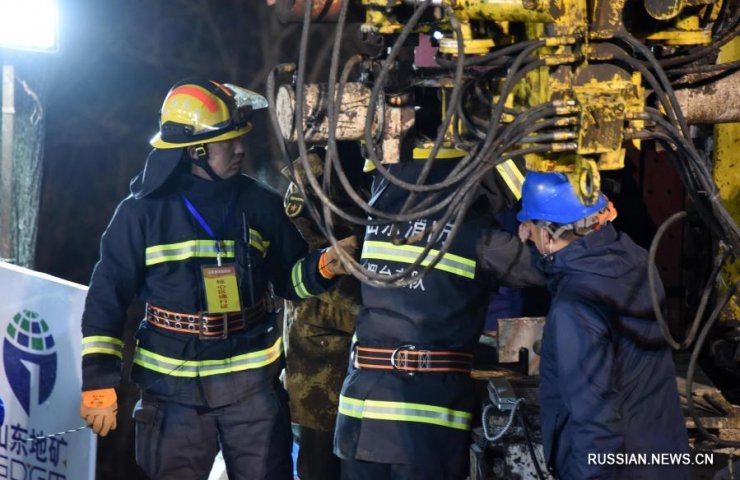 According to local authorities, according to information in a paper note that was handed over by workers trapped in a rubble at a gold mine in Qixia, administratively part of Yantai, Shandong Province, Eastern China, 12 people are still alive, nothing is known about the state of the other 10 workers.

The accident occurred on January 10 at about 14:00. It is assumed that the explosion occurred about 240 meters from the entrance. 22 workers at the time were at a distance of more than 600 meters.

Search and rescue operations at the scene are continuing with the use of drilling rigs. It is expected that through the drilled channel, rescuers must, while in the elevator cage, enter the shaft filled with poisonous gas after the explosion.

Recommended:
Interpipe NTRP allocated 84 million hryvnia for the implementation of environmental projects
The Ministry of Strategic Industry requires developers to accelerate work on the creation of Ukrainian spacecraft
Tesla will launch production of electric vehicles in India
On this topic
Five people killed, 11 injured in collapse of a mine in Colombia
An explosion thundered in the north of China, there are victims
An explosion occurred at the ArcelorMittal mine in Kazakhstan - one of the workers remains under
Eyewitnesses reported details of the deadly plane crash in Kazakhstan
In Luhansk region the miners refused to come to the surface
Congo Glencore mine disaster kills at least 39 people
Add a comment
Сomments (0)
News Analytics
In war-torn Syria, robotics courses for girls open27-02-2021, 11:13
Fitch Affirms Ukraine's Rating At "B " With Stable Outlook27-02-2021, 11:10
Georgia's economy shrinks by 11.5% in January26-02-2021, 21:21
Ukraine retained its position in the world ranking of steel producers and rose26-02-2021, 15:52
ArcelorMittal has raised prices for galvanizing for the European market to 90026-02-2021, 13:23
Increase in prices is forecasted in the markets of steel raw materials -26-02-2021, 09:25
Troy ounce of gold will drop $ 500 in two years - Fitch25-02-2021, 18:29
Global iron ore production growth to outstrip cumulative production in India23-02-2021, 10:22
Fitch Ratings Warns of “Shocking Impact” on Fossil Fuel Exporters18-02-2021, 14:44
Raw material prices rise by about 10.5% in January 2021 - Deutsche Industriebank12-02-2021, 10:48
Sign in with: