At the time of the incident, according to official information, there were 137 workers in the mine, 136 of whom were brought to the surface. 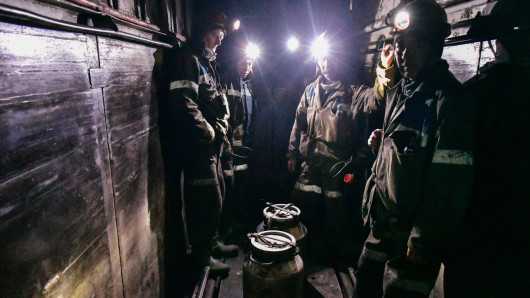 On the evening of January 13, at a mine in the Karaganda region of the Kazakh division of the world's largest metallurgical company, ArcelorMittal, gas and coal were released during drilling operations. The drilling crew left the place of work.

The drilling rig operator could not get out of the face.

An emergency response plan has been put into effect, the emergency and rescue service of the Karaganda branch of RCSP VASS LLP is working.

At the time of the incident, 137 workers of the 3rd shift were in the mine, 136 of whom were brought to the surface.

According to the readings of the equipment, the gas situation in the mine workings of the mine returned to normal. Rescue operations are underway.

The Lenin Mine was commissioned in 1964. In 1968 it was merged with the Naklonnaya mine. In 1996, this and a number of other mines, as well as the metallurgical plant in Temirtau, became the property of the company of the billionaire Lakshmi Mittal, originally from India. In December 2020, ArcelorMittal Temirtau reported that the miners of the Lenin mine fulfilled the annual business plan for production ahead of schedule, raising 1.45 million tons of coal.

At least seven fatal accidents have occurred at the Lenin mine since the late 1970s. The biggest one happened in 2006 - then 41 miners died in a methane explosion, seven were injured.

Recommended:
About 4,000 UK financial companies may go bankrupt due to coronavirus
"Dneprotyazhmash" has mastered a new product - a steel carrier
Dnipro Metallurgical Plant at the end of 2020 worked ahead of schedule
On this topic
Erbol Nurgaliyev visited the metallurgical plant of JSC "ArcelorMittal Temirtau"
Yuzhmash told whether it is possible to launch reusable rockets from the Black Sea
The plant of ArcelorMittal in Kazakhstan is in normal mode despite the quarantine
Relentless degradation of the coal industry. Close Ukrainian mines?
Minamaneho heard the reports of heads of several state-owned mines
Fire broke out at the mine "Stepnaya " SE "Lvovugol "
Add a comment
Сomments (0)
News Analytics
Lenovo remains the global leader in personal computer shipments in 202017-01-2021, 08:19
Ukrzaliznytsia held successful auctions for the sale of scrap metal with an16-01-2021, 17:35
Gosgeonedra of Ukraine is moving to the world geodetic coordinate system WGS-8416-01-2021, 13:38
The only uranium mining enterprise in Ukraine reduced uranium production by 7.1%16-01-2021, 13:52
China's New Energy Vehicle Sales to Grow 54% in 202116-01-2021, 12:32
China will overtake the United States to become the world's largest economy in27-12-2020, 12:04
The shortage in the US steel market will last at least until the end of the25-12-2020, 11:36
Steel production in China to surpass one billion tons this year23-12-2020, 10:59
Iron ore prices hit seven-year high and continue to rise15-12-2020, 10:26
Prices for metallurgical raw materials continue to rise in regional markets10-12-2020, 11:32
Sign in with: