Residents of Nikolskoye, Mariupol and other settlements of the Donetsk region appealed to the President of Ukraine with a request not to allow the mining of zirconium on the lands of the Nikolskaya community. 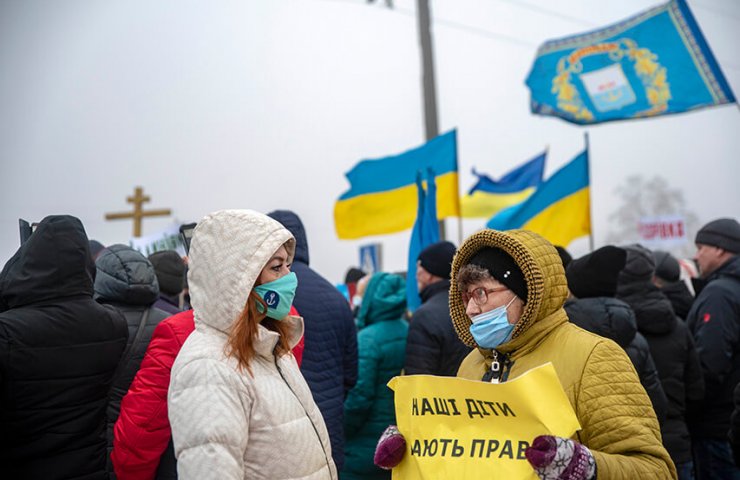 The State Service of Geology and Mineral Resources of Ukraine drew the attention of potential participants in the auction scheduled for the coming Monday to sell a special permit for a site near Mariupol with deposits of zirconium to the ongoing protests of local communities.

Chairman of Dergeonadr Roman Opimakh strongly recommends that before making a decision to participate in the auction and invest in the purchase of a special permit, a meeting with the community should be held, during which all the questions posed by the people should be answered. He said this yesterday on the Donbass TV channel.

“We're not going to mislead. In the current situation, hardly anyone will agree to pay money for a special permit, risking losing it without starting work. Everyone understands that there will be no constructiveness without a well-coordinated dialogue with local residents, ”Opimakh said.

The Gosgeonedra recalled that the laws of Ukraine provide for mandatory public discussions and obtaining a positive opinion on environmental impact assessment at the stage of starting the extraction of natural resources.

Twice the inhabitants of the village of Nikolskoye near Mariupol have already stopped the start of zirconium development - in 2004 and 2012. This year, protests began on January 30 after the decision to auction the zirconia site. On February 11, outside the village of Nikolskoye, residents of Mariupol, villages and settlements of Mangush and Nikolsky districts came out to a numerous rally against the development of a quarry with zirconium.

The protesters temporarily blocked the highway to Zaporozhye, organizing non-stop walking across the road.

Recall that the first auction for this property, January 12, 2021, did not take place due to the lack of interested investors. The procedure for holding auctions provides for the automatic announcement of re-bidding after 30 days and after 15 days, in case of repeated absence of bidders.

Earlier it was reported that representatives of the Mariupol region appealed to the central authorities. The management and representatives of the council collected appeals from communities that are part of the district, deputy fractions and groups, deputies of local councils, public organizations with a request to apply to the central authorities with a proposal to create a commission to study a possible threat in the development of the Azov site with the Azov ore occurrence of zirconium-rare earth mineralization .

Финансовая аналитика, прогнозы цен на сталь, железную руду, уголь и другие сырьевые товары. More news and analytics on Metallurgprom telegram channel - subscribe to get up-to-date market information and price forecasts faster than others.
Сomments
Add a comment
Сomments (0)
On this topic
In Ukraine, more deposits of metals and minerals have already been put up for sale than in the
Mineral resources can become a driver of the Ukrainian economy - head of the State Geological
NADPU expert: the radioactivity of the Azov zirconium deposit is greatly exaggerated
Japanese Marubeni Corporation wants to mine scarce metals in Ukraine
State Geological Survey of Ukraine announces attempts to disrupt auctions for sites with lithium
The largest copper deposit in Ukraine was sold for the third time and again more expensive than the
Recommended:
Prices for metal products in Ukraine increased by 26% last year
War in Ukraine to accelerate world economy transition to clean energy - BP
Nucor Rolls First Steel Sheet at New Kentucky Steel Plant
News Analytics
EU Green Deal should encourage investment in mild steel projects: Eurofer02-02-2023, 16:32
Belarusian steel plant to operate at full capacity from February02-02-2023, 16:56
British Steel considers cutting up to 1,200 jobs at Scunthorpe02-02-2023, 11:50
Electric vehicles will play a key role in US aluminum production growth - Norsk01-02-2023, 12:17
The former president of Motor Sich was accused of aiding terrorists01-02-2023, 11:39
European stainless steel producers ready to raise prices31-01-2023, 16:16
S&P: Russia will continue to dominate the steel export market in the Black05-01-2023, 11:22
Fitch Analysts Predict Big Drop in Global Steel Consumption This Year14-12-2022, 13:59
Analysts predict 5% annual growth in the iron casting market through 203006-12-2022, 12:44
Commodity prices will fall, metals quotes will rise slightly - Focus Economics28-11-2022, 13:28
Sign in with: