Illegal or informal mining operations are common in Indonesia, providing a meager livelihood for those working in environments with a high risk of serious injury or death. 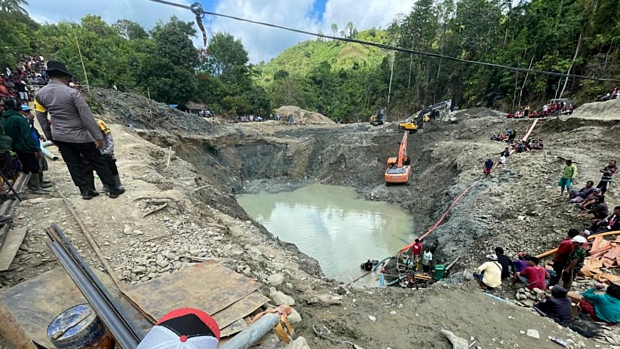 On February 24, one of the gold mines in the Indonesian province of Central Sulawesi collapsed, as a result of which 3 people died, 5 more were missing. This was announced today by the Indonesian National Disaster Management Agency.

As follows from the statement published by the agency, on February 24, at a gold mine located in the Parigi-Moutong district, where local villagers were engaged in illegal mining, a landslide came down due to heavy downpours, resulting in the collapse of the adit. Many workers were trapped. As of 09:00 on February 25 local time, as a result of the tragedy, three people were killed, five were missing, and another 15 were rescued.

The statement notes that rescuers are currently conducting an emergency search for the missing, a large number of heavy equipment has been sent to the scene to participate in the rescue operation. As search and rescue operations continue, the death toll and casualties may rise.

Indonesia accounts for about 3% of world gold production. Most of this comes from the Grasberg mine in Papua province, which has a reported $ 40 billion in reserves and up to 20,000 workers.

Many parts of Asia and Africa are seeing an increase in small-scale, often unauthorized mining. A study by the Intergovernmental Forum on Extraction of Minerals, Metals and Sustainable Development showed that the number of people involved in mining has grown to over 40 million, up from 30 million in 2014 and 6 million in 1993.

Recommended:
Dneprospetsstal reported on the successful completion of the first stage of immunization against COVID-19
Ukraine has increased revenues from the export of ferrous metals by a third due to scrap metal and pig iron
Four people killed in a coal mine accident in North China
On this topic
Two Killed, Four Missing in a Fire at a Gold Mine in East China
Eleven miners still await rescue from exploded gold mine in China
The Ministry of information of Myanmar reported on 114 victims of the landslide at the mine
36 people were killed at a construction site in Cambodia after the contractor saved on the valve
Eyewitnesses reported details of the deadly plane crash in Kazakhstan
Jihadists undermine the extraction of gold in Burkina Faso attacking mine
Add a comment
Сomments (0)
News Analytics
Gas prices in Ukraine have reached a record value over the past two years -16-04-2021, 17:24
Ukrmetallurgprom asks the Antimonopoly Committee to allow Metinvest to bid for16-04-2021, 17:23
A fatal accident occurred on the territory of the Dnieper Metallurgical Plant16-04-2021, 13:01
Cars built for Euro 2012 will be repaired at the Kryukov Carriage Works16-04-2021, 12:46
Novokramatorsk Machine-Building Plant has raised wages for the second time16-04-2021, 12:54
World Steel Association predicts a good year for metallurgists15-04-2021, 18:19
World Steel Association defines green steel and its variations12-04-2021, 13:14
China unlikely to cut steel capacity in 2021 due to high steel prices07-04-2021, 12:11
Scrap metal market at the beginning of April02-04-2021, 11:10
Rising Chinese Prices Fueled Rising Global Steel Prices - MEPS25-03-2021, 18:54
Sign in with: