as a result of the collapse of the six floors of the building under construction due to the use of valves of smaller diameter 36 people were killed and 23 more were injured varying degrees of severity. 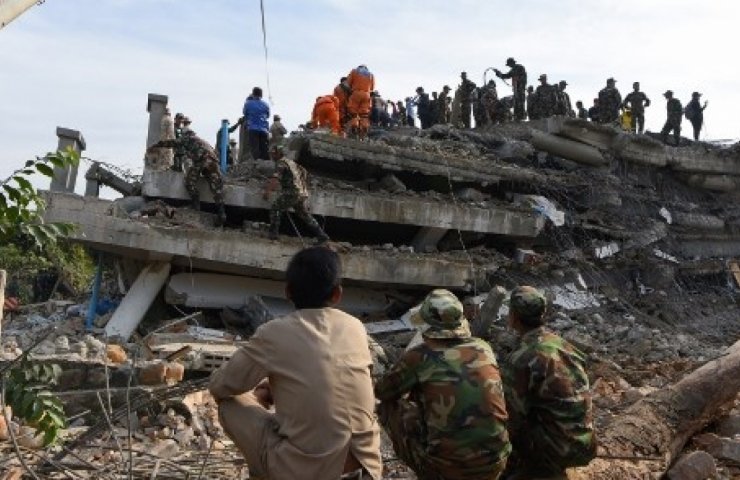 the death toll in the collapse of a six-story building in the southwestern province of Kep in Cambodia on Friday rose to 36, said Sunday Prime Minister Samdech Hun sen of Teco.

"a total of 36 people, including 14 women, were declared dead, and 23 others, including eight women, were injured in a ruined building," he said at a press conference marking the end of the rescue operation.

All the victims were Cambodians, and among them were builders and members of their families, including children.

the Building collapsed at about 16:30 (local time) on Friday, when the workers poured the concrete for the construction of the seventh floor.

"the Preliminary investigation showed that we made two mistakes," said Hun Sen.

first, the contractor used steel rebar of smaller diameter than was required in the General plan of the building, and, secondly, the contractor removed the wooden scaffolding supporting the solidifying of the concrete slab within 10 days after pouring, while the safe period for removal of formwork was 28 days, he said.

"Mistakes of the contractor led to this tragedy," the Prime Minister said, adding that the owners of the building - a local resident and his wife were arrested and will be sent to court for prosecution.

Hun sen expressed his profound sympathy to the families of those killed and injured in this incident.

meanwhile, the Prime Minister said that none of his officials will not be held responsible for the collapse of the building. Hun sen said that in the future such incidents will be less or not at all, after the recently adopted law on construction will be fully put into effect.

an official from the Kep Provincial Land Management, Urban Planning and Construction said on Friday that the building owner has applied for a license for the construction of a five-story building, but he later illegally added onto it to seven floors.

Финансовая аналитика, прогнозы цен на сталь, железную руду, уголь и другие сырьевые товары. More news and analytics on Metallurgprom telegram channel - subscribe to get up-to-date market information and price forecasts faster than others.
Сomments
Add a comment
Сomments (0)
On this topic
Time magazine named ecoactivists Greta Thunberg's man of the year
Sriwijaya Air SJY 182 from Jakarta to Pontianak disappears from radar immediately after takeoff
Energomashspetsstal successfully passed General Electric qualification
Energomashspetsstal will produce on the order of General Electric two qualifying billet
China's largest steel producer to become even larger and number one in the world in terms of
"Naftogaz" has filed a lawsuit against the government of Ukraine for the issuance of a
Recommended:
Russia has updated the list of strategic minerals to include rare earth metals
The European Commission plans to create a European hydrogen bank with a budget of 3 billion euros
China production cuts in winter will give limited boost to steel markets - Platts
News Analytics
EU plans additional sanctions against Russian metallurgy27-09-2022, 10:34
The European Commission has approved 5.2 billion euros of state support for27-09-2022, 10:43
China's leading industrial profits fall 2.1% in first 8 months27-09-2022, 10:20
Moody's changed the outlook for the global mining industry to26-09-2022, 19:04
Russia may increase taxation of oil, gas, coal and fertilizers26-09-2022, 15:58
China production cuts in winter will give limited boost to steel markets -15-09-2022, 10:09
Steel prices may rise as manufacturers stop production11-09-2022, 14:06
IREPAS: The global long products market is in a "dramatic situation"10-09-2022, 20:49
Steel prices are unlikely to rise significantly in the near future - analysts02-09-2022, 22:58
Steel prices may move up on new data from China31-08-2022, 12:19
Sign in with: