An-124-100 aircraft are equipped with a front cargo ramp, which is ideal for safe and easy transportation of heavy and oversized cargo. 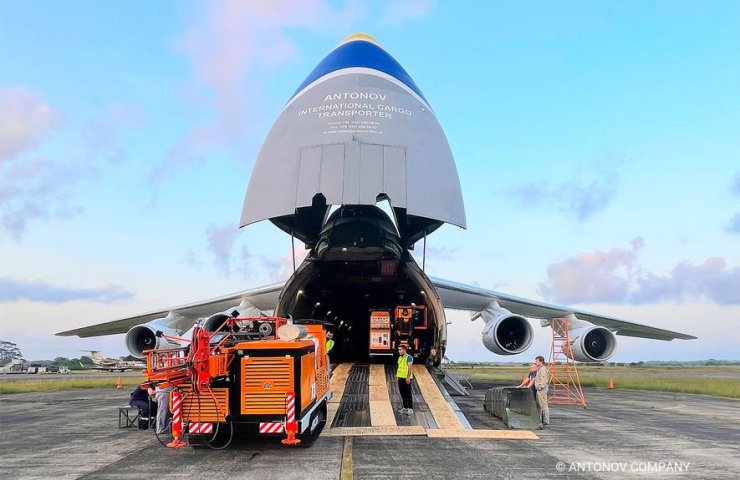 Antonov Airlines transported fourteen pieces of mining equipment with a total weight of 216 tons on two An-124-100 flights from Istanbul, Turkey, to Ouagadougou, Burkina Faso, and Monrovia, Liberia.

The 113-ton cargo on the second voyage was loaded in the shortest possible time to meet the tight deadlines set by the recipients of the cargo - mining mines.

“These two flights from Turkey to Africa were carefully designed and carried out with maximum payload on each route,” said Evgeny Kiva, specialist in the commercial department of Antonov Airlines.

“The airline has fulfilled the requirement of our partner Skyair Chartering to carry out these air transportation within the timeframe set by the customer. During these flights, the aircraft made three technical stops for refueling and rest of the crew: one in Algeria, during the first flight with a cargo weighing 103 tons, which was heading to Burkina Faso, and two stops in Casablanca, Morocco, and Thies, Senegal. when performing the second flight with a cargo weighing 113 tons, ”explained Kiva.

An-124-100 aircraft are equipped with a front cargo ramp, which is ideal for safe and easy transportation of heavy and oversized cargo.

Antonov Airlines has noted an increase since the beginning of the year in demand for flights for the transportation of goods for the mining industry. Just last month, the airline performed three such flights , delivering a cargo with a total weight of 370 tons from Australia to Latin America.

Финансовая аналитика, прогнозы цен на сталь, железную руду, уголь и другие сырьевые товары. More news and analytics on Metallurgprom telegram channel - subscribe to get up-to-date market information and price forecasts faster than others.
Сomments
Add a comment
Сomments (0)
On this topic
Jihadists undermine the extraction of gold in Burkina Faso attacking mine
Since the beginning of the year, Antonov Airlines has transported 626 tons of mining equipment by
Specialists of SE "Antonov" ensured the urgent transfer of mining equipment from
Ukrainian An-124-100 delivered vaccine production equipment from Germany to the USA
NATO expressed gratitude to the state enterprise "ANTONOV" for the work in the framework
SE "Antonov" plans to produce its military transport aircraft An-74 in Canada
Recommended:
China to halve ferroalloy production due to weak demand
The owner of the Dnipro iron and steel works commented on reports of absentee arrest in the Russian Federation
Ukraine reduced the export of semi-finished products from carbon steel by 70.3%
News Analytics
China's iron ore output to rise in 2023 as new projects are launched30-11-2022, 18:10
"Centravis" agreed to supply a new batch of seamless pipes to a30-11-2022, 16:51
Metinvest enterprises in Ukraine resumed work after massive shelling of29-11-2022, 11:59
The European Council added the violation of restrictive measures (sanctions) to28-11-2022, 14:22
The abolition of export duty in India may reduce the price of Turkish steel28-11-2022, 14:07
Commodity prices will fall, metals quotes will rise slightly - Focus Economics28-11-2022, 13:28
Platinum market to face shortage next year - WPIC22-11-2022, 18:25
Global steel demand falls and will fall by 2.3% in 2022: WorldSteel19-10-2022, 23:12
Iron ore prices fall to 11-month low15-10-2022, 10:36
China production cuts in winter will give limited boost to steel markets -15-09-2022, 10:09
Sign in with: