It was extremely important to carry out the work in a short time, because the company confirmed a large volume of cargo for unloading, which means that every minute counts. 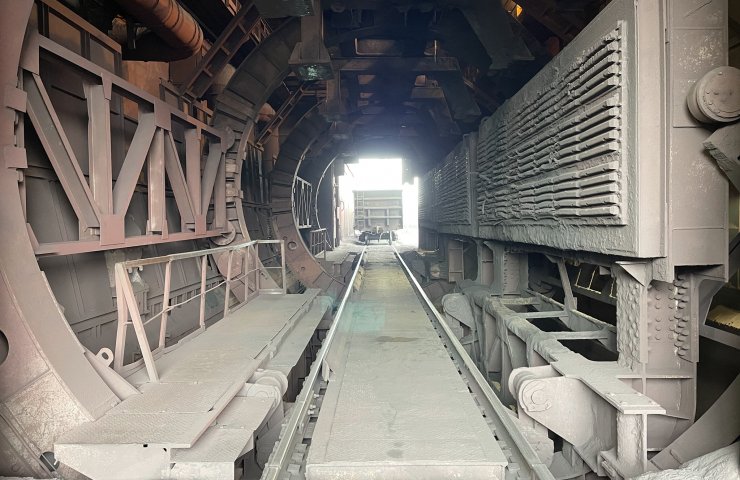 Port "Yuzhny" announced the completion of a comprehensive repair of a car dumper, through which an average of 500 gondola cars with iron ore pass through a day.

After agreeing on the details and identifying the window in the movement of the cars with the dispatching office, the workers of the mechanical repair shops drew up a defective statement and developed a work plan. The works lasted from June 28 to July 5.

“The main purpose of the repair was to replace the slewing ring on stacker # 2. At the same time, the drives on the conveyors of the car dumper were replaced. The repair and construction department replaced the railway switch on the tipper tracks, ”said Sergey Spitsyn, head of the mechanization department of the Yuzhny port.

Earlier it was reported that the port "Yuzhny" plans to increase the volume of cargo handling through the implementation of a number of investment projects: the construction of a new transshipment complex for imported bulk cargo, modernization of the export cargo complex and the installation of a new car dumper.

The State Enterprise "Commercial Sea Port" Yuzhny "in 2020 increased the export transshipment of iron ore by 53% compared to 2019 - up to 13.7 million tons. The largest export ore-coal terminal in Ukraine "TIS-Ruda" is located in the port. Carrying capacity - 7 million tons of cargo per year.

Recall that at the beginning of the year, Ferrexpo, the largest exporter of iron ore raw materials, cut the supply of products to the Yuzhny port by almost half in favor of an increase in supplies by rail to the European Union.

Финансовая аналитика, прогнозы цен на сталь, железную руду, уголь и другие сырьевые товары. More news and analytics on Metallurgprom telegram channel - subscribe to get up-to-date market information and price forecasts faster than others.
Сomments
Add a comment
Сomments (0)
On this topic
Another Odessa citizen became a dollar billionaire
Time magazine named ecoactivists Greta Thunberg's man of the year
"Naftogaz" has filed a lawsuit against the government of Ukraine for the issuance of a
Chinese company gains unlimited access to minerals in Nigeria
From Ferrexpo retired marketing Director
China's largest steel producer to become even larger and number one in the world in terms of
Recommended:
Ukrainian court invalidated sale of Ferrexpo Plc shares in 2002
China's leading industrial profits fall 2.1% in first 8 months
Ukraine's foreign exchange earnings from the export of ferrous metals decreased by $4 billion
News Analytics
British Steel owner asks government for financial support05-10-2022, 13:05
The price of gold crossed the mark of 1700 dollars05-10-2022, 13:28
US coal prices top $20004-10-2022, 10:16
Tata Steel merger plan to secure long-term profits03-10-2022, 10:46
US hydrogen prices to drop to zero dollars per kg in 5 to 6 years: Platts02-10-2022, 21:53
China production cuts in winter will give limited boost to steel markets -15-09-2022, 10:09
Steel prices may rise as manufacturers stop production11-09-2022, 14:06
IREPAS: The global long products market is in a "dramatic situation"10-09-2022, 20:49
Steel prices are unlikely to rise significantly in the near future - analysts02-09-2022, 22:58
Steel prices may move up on new data from China31-08-2022, 12:19
Sign in with: