Interest in the Mariupol port facilities appeared after the Russian side issued an order banning the passage of naval ships and state ships through the Kerch-Yenikalsky Canal. 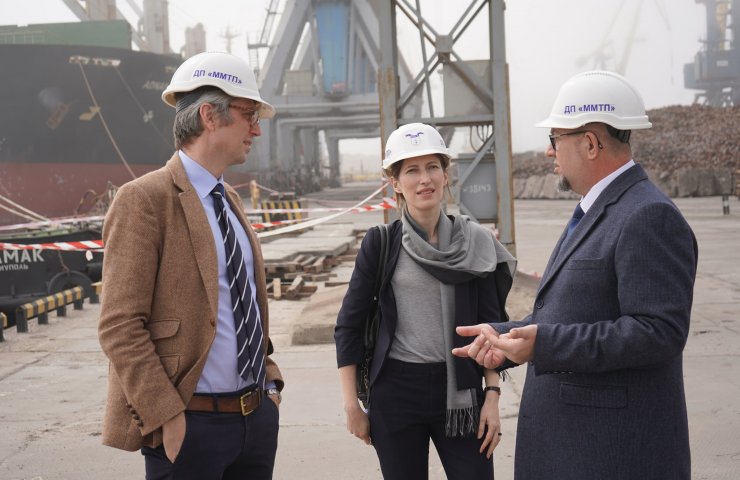 As part of a working trip to Mariupol, the area of ​​the Joint Forces operation and the demarcation line, Ambassador Extraordinary and Plenipotentiary of Sweden to Ukraine Mr. Tobias Tyberg visited the port of Mariupol today.

At the enterprise, he met with and. about. director Igor Barsky, who introduced the distinguished guest to the history of the port and talked about the difficulties that the port workers had to overcome in recent years.

Mr. Tyberg listened with interest to Barsky's information and congratulated the head of the enterprise on the fact that the port managed to stop the decline in cargo handling volumes, and then steadily increase them. The interlocutors also discussed the situation that developed in connection with the order of the Russian side to prohibit the passage of naval ships and state ships through the Kerch-Yenikalsky Canal.

“This is a serious problem as some of these vessels require scheduled repairs to pass the register and obtain a permit to operate. The Azov shipyard will not be able to help now, as it is in the process of being transferred into state ownership, "the port commented, adding that there are no risks for commercial shipping yet.

At the end of the meeting, Igor Barskiy gave the Swedish Ambassador a tour of the enterprise, which, according to the guest himself, made a great impression on him.

Recommended:
Nikopol pipe plant "Centravis" is approved as a supplier of the Chinese corporation Sinopec
Interpipe expands the supply of railroad metal products to the North American region
Zaporizhstal donated 370 tons of medical oxygen to hospitals in April
On this topic
Mariupol port may stop loading ships due to strong wind
The presidents of Ukraine and Switzerland visited the KP "Water of Donbass"
Net profit of commercial port of Mariupol for half a year soared 58 times
France and Ukraine to launch the project to upgrade drinking water supply system in the city of
Ukraine will continue the strategy of development of renewable energy sources in the new environment
At "Turboatom" in Kharkov was visited by the Ambassador of Tajikistan
Add a comment
Сomments (0)
News Analytics
Rinat Akhmetov's engineering company Corum Group sent a delegation to India05-05-2021, 21:09
A mining and metallurgical complex will be created in the Bayan-Undur somon of05-05-2021, 19:39
In Ukraine, European requirements for the ecodesign of solid fuel boilers will05-05-2021, 15:30
April steel production of "Zaporizhstal" increased in annual comparison by05-05-2021, 15:27
Germany plans to achieve carbon neutral economy by 204505-05-2021, 12:28
The current state of the market is ideal for the sale of rolled steel - IREPAS04-05-2021, 18:41
Global hydrogen demand to grow 7-fold by 2070 - PwC21-04-2021, 12:31
World Steel Association predicts a good year for metallurgists15-04-2021, 18:19
World Steel Association defines green steel and its variations12-04-2021, 13:14
China unlikely to cut steel capacity in 2021 due to high steel prices07-04-2021, 12:11
Sign in with: