For 11 months of 2020, the port of Mariupol increased steel transshipment by a third 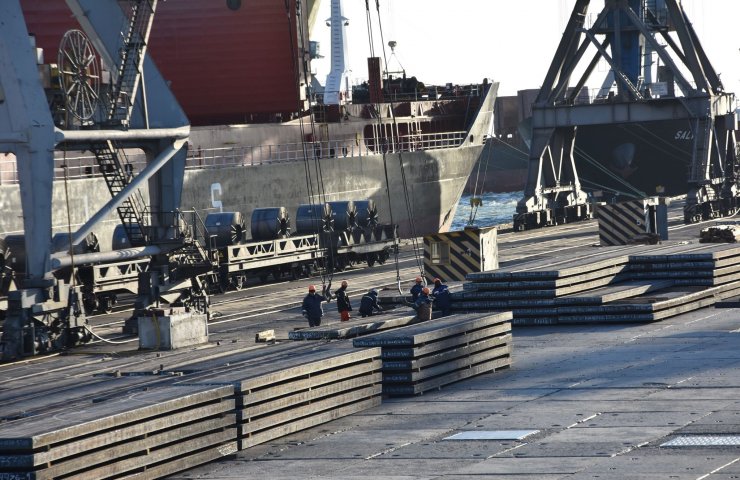 The volumes of metal transshipment in the Mariupol International Trade Port increased in 11 months of 2020 by almost 32% or more than 900 thousand tons compared to the same period last year, to 4 million 297.6 thousand tons. This was reported by the press service of the port on Wednesday.

Average depths at the approach to the port are 12.0 m and allow to serve vessels of almost any carrying capacity, which puts the Mariupol port in a more advantageous position over other ports of the Azov Sea. At the same time, the port is open for calls all year round.

In Mariupol, there are two large metallurgical plants named after Ilyich and Azovstal, which are part of the structure of the Dutch mining and metallurgical holding Metinvest, controlled by billionaire Rinat Akhmetov.

Most of the cargoes of steel billets pass through the port of Mariupol, which are sent to Metinvest's European metallurgical plants, where they are rolled into sheet steel and long rolled products for the end user.

Recommended:
The English court rejected the claims of the Russian "Tatneft" against Yaroslavsky
A plot with copper deposits in the Volyn region of Ukraine has risen in price at auction 483 times
Ukroboronprom and Ukrspetsexport signed a cooperation agreement with EDGE Group
On this topic
Elon Musk contracted coronavirus, but doubts the reliability of the tests
Yuzhmash told whether it is possible to launch reusable rockets from the Black Sea
EU extends economic sanctions against Russia for six months
The operator of the gas transport system of Ukraine has concluded agreements with all connecting
Time magazine named ecoactivists Greta Thunberg's man of the year
The steel industry, the United States recognized itself the most energy efficient in the world
Add a comment
Сomments (0)
News Analytics
Bogdan Motors started construction of buses for Antonov State Enterprise03-03-2021, 11:06
At the Kherson shipyard, the dry cargo ship was lengthened by 25 meters,03-03-2021, 10:04
British unions fear thousands of jobs to be lost due to Sanjiv Gupta's03-03-2021, 10:58
Australia's pipeline operators start adding hydrogen to natural gas03-03-2021, 10:56
The United States expands the list of organizations associated with the03-03-2021, 09:15
Spread between raw materials and high strength alloy steel in Europe increased01-03-2021, 20:21
Increase in prices is forecasted in the markets of steel raw materials -26-02-2021, 09:25
Troy ounce of gold will drop $ 500 in two years - Fitch25-02-2021, 18:29
Global iron ore production growth to outstrip cumulative production in India23-02-2021, 10:22
Fitch Ratings Warns of “Shocking Impact” on Fossil Fuel Exporters18-02-2021, 14:44
Sign in with: