Marosh Shefchovich, as part of a delegation headed by the Prime Minister of Ukraine, got acquainted with the production of the Irshansk Mining and Processing Plant of the United Mining and Chemical Company JSC, the largest producer of titanium raw materials in the country. 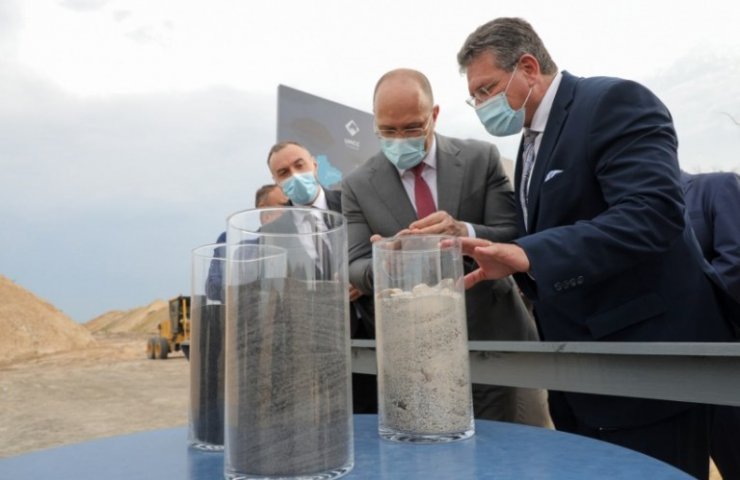 Vice-President of the European Commission Maros Shefchovic arrived on a two-day visit to Ukraine for negotiations on the supply of metals strategically important for the EU economy. First of all, the European guest visited the Irshansk mining and processing plant of the United Mining and Chemical Company JSC (OGCC) to get acquainted with the production of titanium raw materials.

The Chairman of the State Geological Service, who was present in the delegation, believes that Ukraine is capable of increasing titanium production. And the privatization of titanium enterprises, subject to a comprehensive modernization of their production capacities, will allow the production of the necessary alloys to meet the domestic and foreign markets.

“Ukraine has a good chance of integrating into modern high-tech cycles as a permanent element of common supply chains with our partner states, including for increasing the added value of Ukrainian titanium products,” said Roman Opimakh, Chairman of Dergeonadr. - OGHK will be the first object of large-scale privatization, and the new owner will be obliged to invest at least UAH 400 million in the technical re-equipment of the company. This will become an impetus for attracting investments in the sphere of domestic subsoil use. ”

The structure of JSC "OGCC" includes the Volnogorsk mining and metallurgical plant (Dnepropetrovsk region) and the Irshansk mining and processing plant (Zhytomyr region). It is one of the largest producers of titanium raw materials - it occupies 4% of the world market. Its products are exported to more than 30 countries of the world, including the EU countries, Africa, as well as the USA, China, Turkey and others.

On August 31, 2021, a privatization auction of a strategic enterprise in the industry will be held, which was transferred to the State Property Fund of Ukraine.

During the visit, the Vice President of the European Commission also must sign a Memorandum of Understanding between the EU and Ukraine on strategic partnership regarding the supply of raw materials. The move is part of the European Commission's Critical Raw Materials Action Plan, announced in September, to increase the supply of materials vital to sectors including aerospace, defense, electronics, automotive and renewable energy, as well as energy-intensive industries and the health sector. p>

On July 13, Prime Minister of Ukraine Denis Shmyhal and Shefchovich will take part in the first high-level conference on strategic partnership in the supply of critical raw materials to Europe.

Recommended:
CFO resigned from mining company Konstantin Zhevago Ferrexpo
Electric car maker Rivian raises another $ 2.5 billion in private investment
Interpipe calls scrap metal a critical raw material for decarbonization of Ukrainian metallurgy
On this topic
Ukraine and the European Union signed a Memorandum on the supply of strategically important raw
EU and Ukraine to sign preliminary deal for the supply of bauxite, lithium, titanium and strontium
The largest titanium deposit in Ukraine went to Dmitry Firtash
Tomorrow Ukraine will sell the rights to the largest titanium ore deposit - Gosgeonedra
Uranium problems: Ukraine may lose its own production
Stopped nuclear power plants and mines. What's going on in the energy sector of Ukraine?
Partner news
Сomments
Add a comment
Сomments (0)
News Analytics
National Bank of Ukraine predicts economic growth in 2021 by 3.8%29-07-2021, 23:32
"Electrotyazhmash" shipped the stator housing of the hydrogenerator to the29-07-2021, 18:00
Gas price in Europe exceeded $ 500 per thousand cubic meters29-07-2021, 16:43
German concern ThyssenKrupp sells its mining business29-07-2021, 16:22
We are working hard: Ukrzaliznytsia records record indicators of daily load29-07-2021, 11:56
Steel raw materials prices decline in all regional markets27-07-2021, 11:57
On the regional markets of metallurgical products, prices are balancing in a22-07-2021, 16:22
Demand for armaments will ensure a stable growth of armored steel sales by 4%20-07-2021, 10:10
Protectionist Measures Support European Steel Prices Despite Summer Lull19-07-2021, 11:02
Positive price growth is observed in the markets for metallurgical products16-07-2021, 14:12