It was possible to remove the vessel from the shallows after the rescue teams recovered 27 thousand cubic meters. m of sand in which the container ship got stuck. 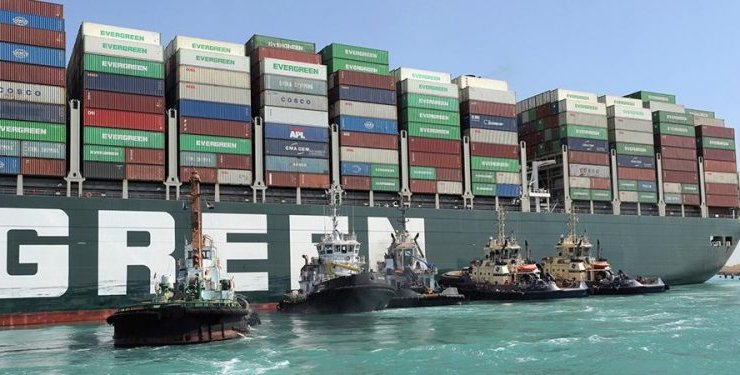 The crisis situation arising from the grounded container ship Ever Given in the Suez Canal has been successfully resolved, despite enormous technical difficulties. This was announced on Monday on his Twitter account by Egyptian President Abdel Fattah el-Sisi.

“Today, the Egyptians have managed to end the Suez Canal delinquent ship crisis, despite the enormous technical complexity surrounding the process from all sides. Having restored the normal course of things by the hands of the Egyptians, the world can now be calm about the route of transportation of goods, ”the president said in a statement.

The container ship that got stuck across the Suez Canal six days ago was pulled off the shallows early Monday morning and brought to the fairway in the direction of the north. With the help of 17 tugs, the vessel was moved from the place where it ran aground with its bow. The success of the operation was facilitated by a one-meter rise in the water level in the canal provoked by the tide. Significant help was provided by powerful tug ALP GUARD with a bollard of 285 tons, which came from the Netherlands on Sunday evening.

Experts expect the tide to start closer to noon in order to tow the vessel to the middle of the channel on the rising water and take it to the lakes located north of the blocking point for technical inspection. Only after the container ship has completely cleared the passage through the canal, the movement of ships will begin. The authorities of this waterway of Egypt hope to fully restore navigation along the canal in three and a half days.

At present, about 400 ships are awaiting passage at the northern and southern entrances to the canal.

Recommended:
21 people trapped underground by flooding of a coal mine in Xinjiang
Electricity tariff for Ukrainians extended at UAH 1.68 per kWh for one more month
Ukrainian industry demanded from the government to prevent economic and social catastrophe
On this topic
Dutch company Boskalis plans to float a vessel in the Suez Canal on Monday
Lockdown of the Suez Canal will last until at least April 1: it could drive up steel prices
Saudi Aramco's net profit almost halved in 2020
US imposes new sanctions on Iran in the last days of Trump's presidency
US hits Iran's steel industry again
Iran's uranium enrichment up to 20% calls into question nuclear deal with Tehran - EU
Add a comment
Сomments (0)
News Analytics
The capacity of the domestic steel market in Ukraine in January-March decreased19-04-2021, 10:33
In Russia, there is an exuberant demand for agricultural machinery19-04-2021, 10:24
Iran is satisfied with the reaction of the world community to 60% enrichment of18-04-2021, 13:24
Gas prices in Ukraine have reached a record value over the past two years -16-04-2021, 17:24
Ukrmetallurgprom asks the Antimonopoly Committee to allow Metinvest to bid for16-04-2021, 17:23
World Steel Association predicts a good year for metallurgists15-04-2021, 18:19
World Steel Association defines green steel and its variations12-04-2021, 13:14
China unlikely to cut steel capacity in 2021 due to high steel prices07-04-2021, 12:11
Scrap metal market at the beginning of April02-04-2021, 11:10
Rising Chinese Prices Fueled Rising Global Steel Prices - MEPS25-03-2021, 18:54
Sign in with: