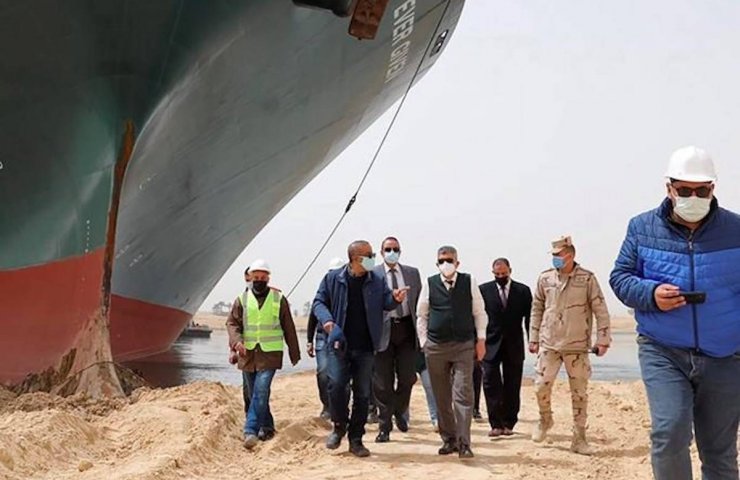 The CEO of Dutch dredging company Boskalis, Peter Berdowski, hopes that he will be able to free the ship stuck in the Suez Canal early next week. But whether it will be successful depends on a number of factors, he told in the Nieuwsuur (News Hour) program.

According to Berdowski, two heavy tugboats with a bollard pull of about 400 tons are going to the site of the accident of the container ship Ever Given. They will reach the traffic jam on Sunday.

Berdowski believes a combination of factors may be beneficial to free the ship. High tide is expected on Monday, which will raise the water level by an additional 40-50 cm.

With the help of these vessels, given the already removed sand and high tide, we hope we will be able to get the Ever Given on the fairway early next week, ”Berdowski said.

If that doesn't work, Berdowski has a plan B.

“We are already installing cranes ashore, which should allow us to remove containers from the bow deck. This will lighten and slightly raise the front of the boat to facilitate refloating, ”he said.

The disadvantage of this plan, according to experts, is that its implementation will take longer. We are talking about at least 600 containers, and it remains unclear what to do with them in the future. All around the desert, and movement along the canal will have to resume immediately.

“We are currently playing chess on two boards at the same time. But we hope that there will be enough tugs, high tide and deepening of the bottom, ”Berdowski said.

The container ship Ever Given, owned by the Japanese company Shoei Kisen KK, was sailing from China to Rotterdam under the Panama flag. Last Tuesday, in a sandstorm off course, he ran aground in the southern part of the Suez Canal, completely blocking traffic. About 300 ships have already accumulated here and the traffic jam continues to grow.

The Suez Canal is one of the most significant trade routes in the world, the most important link in the supply of oil from the Middle East to Europe and the United States, about 20 thousand ships pass through it a year.

Recall that the container ship that blocked the Suez Canal has already caused the growth of world oil prices and regional prices for steel and ore. Economists estimate that each hour of channel downtime costs the global economy $ 400 million, while total losses could exceed $ 10 billion.

Recommended:
Vadim Novinsky was informed about corruption schemes in strategic energy companies
Ukrzaliznytsia will check its suppliers in connection with the disruption of diesel fuel supplies
President of the Bogdan Corporation files a lawsuit against Ukraine in the European Court of Human Rights
On this topic
Lockdown of the Suez Canal will last until at least April 1: it could drive up steel prices
Interpipe starts supplying pipe products to Qatar Petroleum
Seoul to hold talks with Tehran on release of tanker seized by Iran
Production of uranium concentrate in Iran will be increased eightfold to 35-40 tons per year
South Korea sends military special forces to release tanker captured by Iran
Saudi Arabia's National Oil Company plans to build a metallurgical plant
Add a comment
Сomments (0)
News Analytics
Металлолом в Турции сегодня стоит дороже чем арматура год назад – более 50012-05-2021, 14:55
GFG Alliance lists French steel mills for sale12-05-2021, 11:37
Ukroboronprom approved a roadmap for overcoming the crisis of Kharkiv Aviation12-05-2021, 10:30
For 4 months of 2021, freight traffic on the Dnieper increased by 1.2 million12-05-2021, 10:41
Energomashspetsstal plant shipped over a thousand tons of metal products to12-05-2021, 10:18
The current state of the market is ideal for the sale of rolled steel - IREPAS04-05-2021, 18:41
Global hydrogen demand to grow 7-fold by 2070 - PwC21-04-2021, 12:31
World Steel Association predicts a good year for metallurgists15-04-2021, 18:19
World Steel Association defines green steel and its variations12-04-2021, 13:14
China unlikely to cut steel capacity in 2021 due to high steel prices07-04-2021, 12:11
Sign in with: