Lockdown of the Suez Canal will last until at least April 1: it could drive up steel prices

A giant container ship, nearly the size of New York's Empire State Building, stuck in a sandstorm in the Suez Canal in Egypt, causing a congestion of cargo ships on one of the world's busiest shipping lanes. 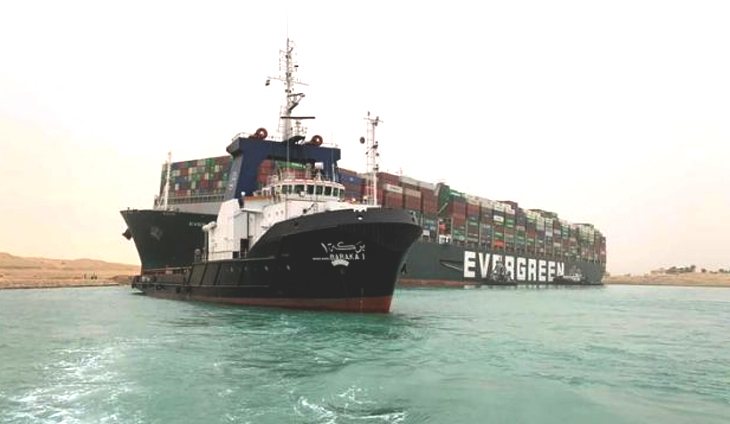 The operation to restore traffic on the Suez Canal will last at least until next Wednesday. Bloomberg reported this on Friday, citing sources.

According to him, a larger volume of sand will need to be removed to drive a container ship off the ground. In a statement released on Friday night by the Suez Canal Authority, it was said about the need to remove up to 20 thousand cubic meters. m of sand.

The Suez Canal carries 12% of the world's cargo traffic and is also one of the busiest waterways of the world oil tanker transportation.

The waterway is also used to transport steel and steelmaking raw materials including iron ore, pellets and hot rolled steel between the CIS and Asia, including China; aluminum semi-finished products from the Middle East to Europe and for copper supplies from the West to China.

The Black Sea shipping schedule has already been affected by the incident due to delays in ships arriving at the port to load cargo, with the potential for further increasing ship shortages.

A representative of the steel company Qatar Steel believes that the lockdown of the Suez Canal affects the transportation of 55,000 TEU of cargo from Asia to Europe every day, so next week congestions in European ports will begin.

This could affect all global traffic as “the next best way to get from Asia to Europe is to circle the entire African continent, which is almost 9000 km more and two weeks longer,” said a Qatar Steel spokesman. >

Recommended:
Russian government prepares retaliatory measures against skyrocketing metal prices
One person died in a collapse at a mining and processing plant near Murmansk
ArcelorMittal Kryvyi Rih welcomed World Day for safety and health at work with new overalls
On this topic
Saudi Arabia called for an emergency meeting of OPEC+ after the call of the President of the United
Citigroup experts did not rule out the collapse of Brent oil to $ 5 per barrel
Saudi Aramco has offered to buyers of oil, the highest discount for the last 20 years
Belarus received the first batch of oil from Norway
Ukraine needs 16 billion dollars of investment in infrastructure and grain storage
Belarus to restore river navigation with Ukraine
Add a comment
Сomments (0)
News Analytics
Автопром рванул вверх: выпуск автотранспорта в Украине в апреле увеличился в 1612-05-2021, 15:44
The Minister of Energy of Ukraine promised today to close the issue of wage12-05-2021, 14:24
Scrap metal in Turkey is more expensive today than rebar a year ago - more than12-05-2021, 14:55
GFG Alliance lists French steel mills for sale12-05-2021, 11:37
Ukroboronprom approved a roadmap for overcoming the crisis of Kharkiv Aviation12-05-2021, 10:30
The current state of the market is ideal for the sale of rolled steel - IREPAS04-05-2021, 18:41
Global hydrogen demand to grow 7-fold by 2070 - PwC21-04-2021, 12:31
World Steel Association predicts a good year for metallurgists15-04-2021, 18:19
World Steel Association defines green steel and its variations12-04-2021, 13:14
China unlikely to cut steel capacity in 2021 due to high steel prices07-04-2021, 12:11
Sign in with: